What Bhavik Koladiya, two other BharatPe founding members are up to at their new venture 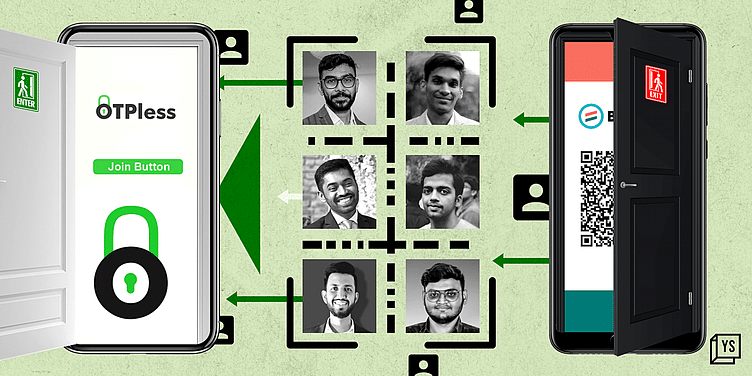 Long before Bhavik took charge as the CEO of OTPless this month, he and his former BharatPe colleagues Tanmay Sagar and Satyam Nathani had been working on building the WhatsApp-linked authentication platform with unicorn ambitions.

﻿BharatPe﻿ was still a steady ship and heading into unicorn territory when co-founder Tanmay Sagar left the company with an idea in mind: allow folks to log into websites and other platforms using WhatsApp, more secure than logging in via emails or one-time passwords sent over text messages.

That was in May 2021, much before Bhavik Koladiya, the original founder and the first CEO of BharatPe, left the company in August last year. Along with Bhavik and another BharatPe cofounder, Satyam Nathani, Tanmay began working on the new startup idea in stealth mode.

Three other former senior BharatPe colleagues—Sagar Satija, Manas Poddar and Chirag Bhadiyadra—too have joined them at ﻿OTPless﻿. Six of the startup’s 10 members are now former senior executives from BharatPe.

Bhavik, presently in a legal tussle with former BharatPe CEO Ashneer Grover to reclaim his shares, fronted the initial money from his venture capital firm Finix Partners, which was incorporated in May last year.

“We jugaadus are back at it again,” says Bhavik from his new office in Surat, Gujarat, employing a colloquial Hindi word for people taking a non-conventional approach to problem-solving.

OTPless, headquartered in Delhi and incorporated in December 2021, formally launched its product in October.

Since then, it has signed up 2,000 clients, including BharatPe, PostPe, Freo, CityMall, EasyEats, GameZop, Capri Global and Park+, and processed more than 7 million authentication requests, according to Bhavik. The startup has some large financial institutions, public sector units , and unicorn startups as well in the pipeline, he says.

OPTless is tracing a path similar to Auth0, which revolutionized email-based login and was acquired by rival Octa in 2021 for about $6.5 billion.

The WhatsApp route makes sense considering the platform has about 2 billion users globally, with nearly one-fourth of them in India.

OTPless, for now at least, is focussed on building a solution for small and medium-size entrepreneurs in India, many of whom are more likely to be heavy users of WhatsApp than email on their phones.

Bhavik also revealed that the startup recently raised its first external funding, a seed round of about $2.7 million. He declined to disclose more details.

Sowing the seeds over dinner

The idea for the WhatsApp-based authentication and login system came up over a dinner conversation. Tanmay had originally thought it up after a struggle to receive an OTP message to log into a website.

The trio go back to their college days at IIT-Delhi. While Satyam and Bhavik handled product and tech at BharatPe, Tanmay oversaw the business side along with Ashneer.

“We have been together since 2016, and met almost everyday,” says Bhavik. “OTPless was an idea discussed on a dinner table, and just like that, we said let’s just start the company.”

Bhavik’s wife Dharti Koladiya, also a coder, partnered with Tanmay to start building the platform. “I saw an opportunity (as an investor) and I took it,” says Bhavik.

It was a while, though, before this team would come together at OTPless.

“Satyam was supposed to join Tanmay in 2021, but he was at the helm of building the core banking stack of PMC Bank (Punjab and Maharashtra Cooperative Bank that BharatPe and consortium partner Centrum Financial Services acquired in 2021),” says Bhavik. “Same for me. We had to finish our jobs at BharatPe first.”

Satyam eventually joined in June last year, followed by Bhavik, who joined as a board member before formally becoming the CEO.

“Our period at BharatPe was concluded, and it was time to move on,” says Bhavik. “We are just a bunch of geeks who know only about tech and product. We don’t fit into large teams. In a way, we were all looking for an exit and OTPless came in at the right time.”

Login authorisations via email and OTP have increasingly become prone to phishing attacks.

Also, while OTPs on phone numbers were introduced to provide an additional layer of security for the login and authentication process, it comes at a cost, almost 17 paise per text message for merchants.

“Anyone can read your SMS. Plus, sometimes the SMSs don’t come through, leading to drop offs,” says Bhavik.

Logging in with WhatsApp, on the other hand, doesn’t require any OTP, username or password, and instead uses a combination of factors including phone numbers, device information, and location data to verify a user’s identity. No data is stored in the process.

“There is also the convenience and familiarity of WhatsApp,” adds Bhavik. “Our clients have seen an increase in login conversion by almost 25% after switching to this (WhatsApp-linked login) button.”

Operating on a freemium model, OTPless, which is at a pre-revenue stage, pays a minimal fee to WhatsApp for every authorisation. It plans to charge a monthly fee in future from clients for value-added services.

Next in line: Telegram and iMessages

The startup’s current focus is on building the product and its distribution channel, and getting more merchants onboard.

The next phase would be to introduce a ‘login with Telegram’ solution for the Indian market, and with iMessages in the US.

“Putting a button is easier said than done. It’s a hard task and we are on it,” says Bhavik. “The next 5 years will be crucial for our business.”

There’s still the thick shadow of BharatPe hanging over the team, including the latest controversy involving Ashneer and Bhavik. Bhavik had his own share of controversies even earlier—he had to step down as CEO and from BharatPe board after reports surfaced on his conviction in the US in a credit card fraud case.

“We all have our learnings from (the issues at BharatPe). Mine would be to trust but verify,” says Bhavik, declining to dwell further on the topic. “We are just a bunch of jugaadus, and are on to building our next venture, maybe a unicorn.”