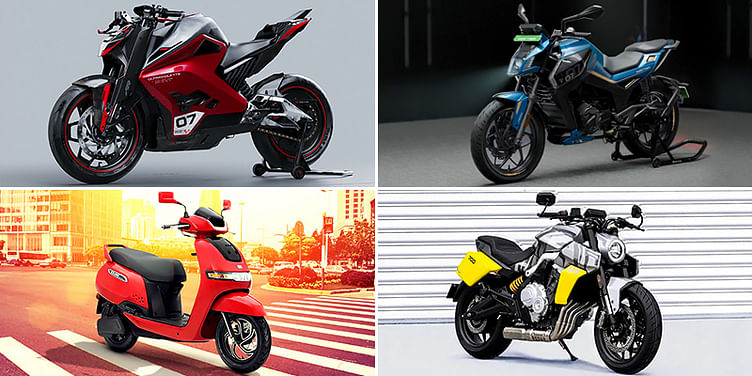 Many interesting two-wheelers were displayed at the Auto Expo 2023, with almost 90% of the segment dominated by electric mobility.

Although many automaker OEMs were inconspicuous with their absence, the 2023 Auto Expo generated quite a buzz with many new offerings to display. Similarly, the two-wheeler segment—which had fewer brands participating—had plenty of models showcased on the podiums.

AutoStory brings out some of the prominent two-wheelers previewed at the latest edition of Auto Expo that made many heads turn.

Last year, TVS updated its iQube range of electric scooters but didn’t reveal its top-of-the-line ST variant during the announcement. The company found the perfect opportunity to display the top-spec ST variant of iQube at the Auto Expo, which gets better features and improved range over its siblings.

In terms of appearance, iQube ST is identical to the standard and S variants but packs additional amenities like TPMS (Tyre Pressure Monitoring System) and voice assistance. It also features a bigger 4.56kWh battery and a 3kW motor that offers a claimed range of 145 km on a single charge. TVS is expected to announce prices for iQube ST in the next couple of months.

Chinese automaker Benda wants a share of the pie in the growing market for premium motorcycles in India, and hence, showcased its middle-weight cruiser LFC700 at the 2023 Auto Expo. Powered by a 680cc inline four-cylinder engine, this mill produces 91 bhp and 63 Nm of peak torque while paired with a six-speed gearbox.

LFC700 flaunts a traditional cruiser design with a low-slung stance, forward-set footpegs, and an extremely fat rear tyre. While Benda doesn’t have a direct presence in the Indian market, like the V302C, the LFC700 would be sold under the Hungarian moniker of Keeway, if and when launched.

Matter Energy made its presence felt at the biennial auto event by presenting two new electric motorcycle concepts. Named UT and EXE, both bikes are underpinned by the same platform and feature removable battery packs. Moreover, both models boast a futuristic and angular styling, associated with modern electric two-wheelers.

While UT flaunts a naked streetfighter design, EXE is the brand’s first attempt at creating an adventure tourer. The Ahmedabad-based startup is yet to reveal specifications for both bikes, but expect them to offer a range of over 100 km on a single charge.

Adishwar Auto Ride India (AARI) brought another Chinese-owned Italian brand under its umbrella named Moto Bologna Passione (MBP). AARI showcased two models from the MBP brand at the Auto Expo—M502N and C1002V. While the former is a naked street bike, the latter is a modern interpretation of a power cruiser.

After enthralling the Indian auto market with the recently launched F77 electric sports bike, Ultraviolette demonstrated a more hardcore racing concept of the same. Named F99, this prototype is built on the brand’s Factory Racing Platform, slated to be the first electric motorcycle to be built in India for motorsports.

Unlikely to go into mass production anytime soon, the objective of F99 is to bring out groundbreaking innovations in the electric motorcycle segment. Ultraviolette has managed to extract the maximum power possible out of the powertrain while passing all mandatory safety tests. As a result, it churns out 65 bhp and clocks a top speed of 200 kmph.