How these 5 women lost everything and still rose to success 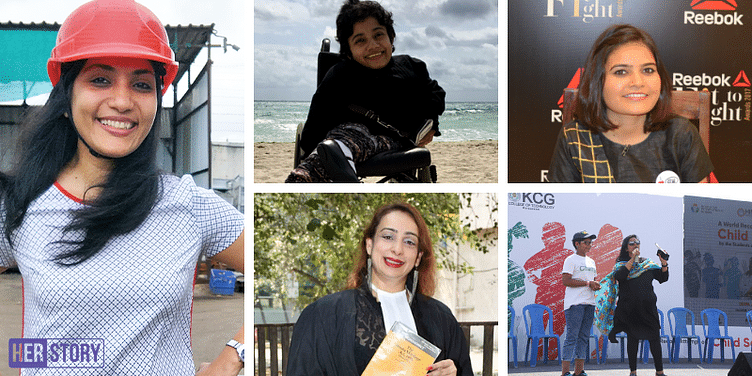 Meet these five women from different walks of life who have endured many challenges to be where they are right now. These achievers and role models have proved, through their struggles, that faith and hope always sustain.

When the going gets tough, the tough get going maybe a cliché for some, but for a lot of women facing struggles on a daily basis, there’s no option but to face them and move on.

Listening to their struggles is getting an insight into what they faced at every step to become the people they are now – a beacon of hope for others. We can mouth all the platitudes we want – ‘every cloud has a silver living’, ‘there is light at the end of the tunnel’, etc – but we can understand struggle only if we live through it and understand what the other person is going through.

These five women exemplify the truth that no matter the struggle or the challenge in your path, the brickbats hurled at you, or the number of situations that pull you down, a sense of optimism and the will to keep going is what make you an achiever, in every sense.

Chandni Khan grew up in a slum and from the age of five started performing street magic shows and picking up rags along with her father. When her father passed away, she became responsible for her family and struggled to earn Rs 30 in a day. A few volunteers from Badhte Kadam, an NGO, enrolled her in educational classes they were organising in the slums. So, at the age of 10, Chandni picked up a pencil and learned how to read and write. She continued working for Badhte Kadam, helping them open new education centres, and connected more children to these centres. It also opened up an opportunity for Chandni to work with a newspaper by and for slum kids – Balaknama, which now has a circulation of 5,000. All these activities prompted Chandni to start Voice of Slum, an NGO whose aim is to provide street children with basic amenities like health, education, and shelter.

The girl from the slums who first held a pencil at age 10 is now helping slum children rewrite ...

This Chennai-based entrepreneur went through periods of intense struggle from childhood to become the person she is a today – a successful entrepreneur with the School of Success. She was called “baby elephant” and mocked for her weight in school. A teacher’s kind words motivated her to study well and become confident. However, life still had a lot of struggle in store for her. She married against the wishes of her parents, stood on her own feet with an events company but, as fate would have it, her business partner cheated her, and she was back to square one. She was bankrupt at 24 and had no money to buy milk for her child. She bought some balloons, took them to the beach, and sold them after telling stories to children. This was the modest beginning to the School of Success, a venture that provides programmes to teachers, parents, and students and caters to over 2,500 schools across the country.

She was bullied at school, went bankrupt at 24, sold balloons on the beach, but believed ‘apna ...

Imagine a situation where you are abused by your in-laws and thrown out of your marital home at 2am. You have just Rs 750 in your pocket, nowhere to go, and no one to turn to. This was the situation lawyer-activist-author Vandana Shah found herself in when she was all of 28 years old. Today, she is a leading divorce lawyer and the founder of India’s first non-judgemental divorce support group, challenging the mores of a patriarchal middle-class society that has different rules for women. Apart from this, she has also written a book, 360 Degrees Back to Life – a Litigant’s Humorous Perspective on Divorce, based on the experiences of the support group. Vandana also claims to have launched the world’s and India’s first legal app, DivorceKart, which aims to answer all legal queries regarding divorce instantly.

She left home with just Rs 750 and a determination to succeed. Today, she is a successful divor...

She has suffered more fractures than the number of bones in her body. Even the simple act of sneezing or coughing would trigger a fracture. Twenty-nine-year-old Dhanya Ravi suffers from osteogenesis imperfecta (OI), commonly known as brittle bone disease, a rate genetic disorder that is present from birth. Despite her condition and the constant visits to the hospital, Dhanya is passionate about raising awareness about the disease and helping those in need. When Latha Nair started the Amritavarshini Charitable Society, India’s first NGO for people affected by osteogenesis imperfecta, she played a major role in creating awareness about the disease through public speaking, news shows, and TV interviews. She also advocates mandatory genetic testing of pregnant women for early diagnosis to facilitate rehabilitation. Despite her disability, this young woman has made sure she leads a life with a higher sense of purpose.

Sheetal Talati was just 22 when her father passed away, and she had to take over the reins of the business just 10 days after his death. Pushpa Industries was started in 1987 by Rohit Talati. When Sheetal took over in 2007, it just had seven employees. It was a tough situation as she was already dealing with her father’s loss and the older employees were worried as to how she would take the company forward. There were many offers for a buyout and existing clients left when they found she was in charge. She did not give up and to learn more about the manufacturing process and the products, she enrolled in a course in air-conditioning and refrigeration. She focused on building processes and systems to remove all chances of error. And in 10 years, the company has raised its capacity to manufacture 360,000 coils in a year compared to 55,000 coils in 2007. A big leap indeed.

At 22, this woman entrepreneur lost her father, took over his business, lost many clients, but ...

Priyanka Chopra, Deepika Padukone, and Malaika Arora: celebrities who have invested in startups...