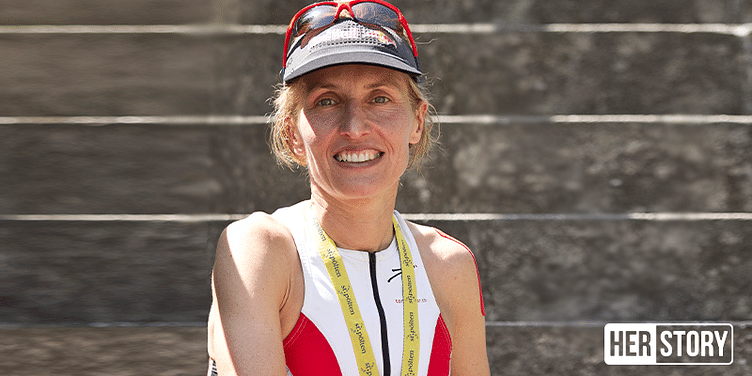 Natascha Badmann, 52, is a triathlete and one of the best in the field of endurance racing, with six wins at the Ironman World Championships. Speaking to HerStory, she talks about her journey so far, the hurdles she has faced, and how she has stayed on top of her game.

While many athletes start out playing sports as children, Swiss triathlete Natascha Badmann only took an interest in it in her early 20s. It took another seven years to enter professional sports at the age of 30, and today, she is arguably one of the best in the field, with six Ironman World Championships wins to her name. She is also a Red Bull athlete.

From having a child at 18, to becoming the first European woman to win the Ironman World Championships in 1998, and recovering from a horrific bike accident in 2007, Natascha’s life has been quite a rollercoaster. Speaking to HerStory, the 52-year-old shares her tumultous journey over the years.

Unlike many sportspersons, Natascha was not very inclined towards sports as a child. She didn’t have an inclination towards athletics, and wasn’t the best at sports in school. Her interest only developed much later, as a young adult.

“I started gaining interest in sports pretty late, when I was 23 years old. This was because I was overweight and overworked; I was not satisfied with myself and used to be depressed, in search of something,” she recalls.

The turning point happened when she met her coach, Toni Hasler, now her husband. Hasler encouraged her to try running, and she started without any professional equipment, running just one block at a time. Little did she know that this small step towards sports would one day place her among some of the most celebrated athletes in the world.

A hurdle Natascha faced during this time was taking care of her daughter, balancing a professional career, and pursuing sports at the same time. She had given birth to her daughter, Anastasia, at just 18, and when she decided to explore sports, she was worried she wouldn’t be a good mother.

A working professional at the time, Natascha had to balance taking care of her child, a hectic work schedule, and running for 30 minutes a day. But with time, she learnt how to make things work.

Female athletes from small-town India jump through several hoops in their race towards the fini...

As she continued training with Hasler, Natascha began developing a passion for running. Five years later, she won the 1995 Duathlon World Championships in Cancun, Mexico.

In 1998, she won her first Ironman World Championships, which was held in Kona, Hawaii, and became the first European woman to win the event.

“I remember my first victory in Kona ’98. I was so happy, happier than I could express with words. I spread my arms out and wanted to share my happiness with the whole world!”

While taking part in the Ironman Championships in 2006, Natascha struggled with stomach issues that caused her to slow down, and even throw up during the run. But with a lot of determination, tears, and cheers from fans, she finished 10th in the event.

At the same event in 2007, Natascha met with a horrific accident that could have meant the end of her career. She hit a cone during the biking leg, and ended up with multiple injuries and broken bones, and had to drop out of the race.

However, undeterred, Natascha made a spectacular comeback in 2012, winning the Ironman in South Africa.

Throughout her career in sports, Natascha says her rock has always been Hasler. “My whole team is Toni. He takes care of my bike and is a great cook. He also helps me with mental training, which is very important too.” She also mentions having therapists back home, who help her stay afloat.

Natascha stepped away from professional sports in 2016, at the age of 50. On why she made this decision, she says,

“I believe now it’s time to inspire others.”

For Natascha, sports has had a huge impact on her life, by completely changing her life and personality. She says,

“Sports showed me that it’s not always easy; sometimes it makes you want to cry hard. But at the end I got the satisfaction, the joy, the great feeling of crossing an Ironman finish line. This is something you have to work for. Only you can make it. Nobody can give it to you and you can’t buy it. You have to experience it.”

Although she doesn’t participate in large-scale professional events today, Natascha is gearing up to take part in India’s first Ironman 70.3 happening later this month in Goa.

“I have wanted to travel to India for a race for the longest time. I believe this will be one hell of an experience. I can’t wait to be a part of it,” she says.

Now that she has more time for herself outside of sports, Natascha aims to give more motivational speeches and inspire others with the story of her life.

For women pursuing sports, Natascha has a pertinent piece of advice.

“It is very important to have a plan. I don’t mean that you need to know if you want to become world champion, but I never had this. I committed to the sport for five years, and then told myself I will decide the next steps. It’s also very important to always enjoy the sport. Of course it’s often hard, but generally have a positive and happy attitude. Only with enthusiasm can you realise big dreams!”