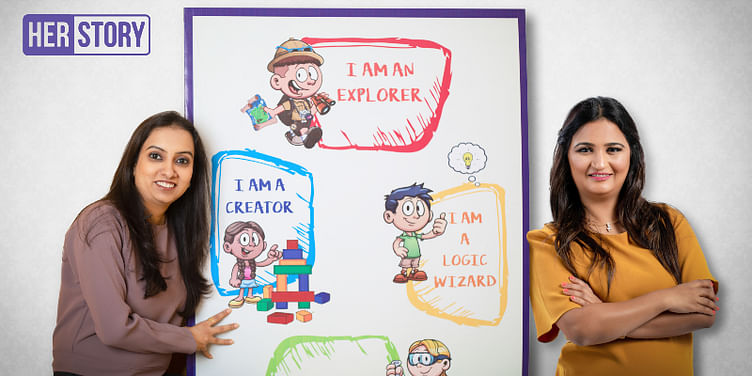 Women entrepreneurs Ruchi Jhawar and Anju Modi offer innovative education beyond the confines of a classroom with their startup Cogitus. The duo helps students improve their creativity and higher order thinking skills at centres across the country.

Schools in India often focus on theory and rote learning that rarely help a child with their holistic development. While there are useful lessons taught in classrooms, there's much more to education.

Aiming to give children a more creative and innovative shot at learning, childhood friends Ruchi Jhawar and Anju Modi co-founded Cogitus in 2017. Headquartered in Ranchi, the startup has centres in Bengaluru, Pune, Indore, Satna, and Surat. It also has a marketing centre in Dubai.

The co-founders describe Cogitus as a higher order thinking after-school programme, which focuses on building the vital skills of creative, cognitive, and critical thinking in children between the ages of 4 and 14.

They say their modules shift the learning focus from “prescription and testing” to innovative thinking, reasoning, and problem solving.

Speaking to HerStory, Ruchi and Anju share their journey from school friends to co-founders, and how they are reforming the way children are educated.

Ruchi and Anju have been friends for more than two decades. They were schoolmates back at Daly College in Indore, and went on to graduate from Leicester Business School in the UK. Since day one, both of them have had a keen interest in education, and often brought it up in conversation, wondering how they could bridge the gaps in the education system.

Eventually they got married in different cities, and kept their passion for education going by running their own after-school programmes. But their dissatisfaction with the education system peaked when they were raising their children.

"We realised that while the world was talking about developing 21st century skills, our education system remained focused on rote learning and acquisition of knowledge. The Indian education system still doesn't encourage reflective thinking. Children are supposed to accept whatever is thrown at them, without thinking or questioning," the co-founders say.

This realisation led the duo to start working on a programme that would give children a fresh perspective, and encourage them to think beyond the ordinary.

In 2015, they co-founded Cogitus, which means "I think" in Latin. While the startup was officially set up that year, it began operations in 2017. The startup is bootstrapped.

Learning to think and innovate

Cogitus helps build cognitive, critical, and creative thinking skills in children between 4 and 14 years. Based on the co-founders' belief that mastering the basic skills of mathematics, reading and writing is no longer enough, the startup encourages children to think, analyse, reason, solve problems, and innovate.

Children enrolled at Cogitus are taught using an annual programme developed by a global team with experts in various subjects, and has four core modules:

Cogitus Explore, which consists of collaborative and interactive sessions that help kids understand the similarities and differences in the world around them, through lessons about mapping, navigation, geography, culture, and current affairs.

Cogitus STEAM, which is an "innovative and contemporary" curriculum based on educating students in science, technology, engineering, arts, and mathematics, taught in an integrated manner with emphasis on real-world application.

Classes at the startup are held once a week for one-and-a-half hours across five age group divisions. Students have the option of enrolling for yearly or half-yearly courses. So far, the startup claims to have enrolled over 500 students. Each centre has a student-to-teacher ratio of 8:1, and works on a franchise model.

The co-founders say that the teachers at Cogitus are "passionate about kids, dedicated, open minded, energetic, and ready to listen and accept."

The concept of an after-school programme that doesn't involve rigorous tuitions and emphasis on scoring the highest grades is relatively new in India. This made starting up in the alternative education space more challenging.

"Our main challenge has been making parents understand and accept the importance of higher order thinking and moving from being marks-oriented to honing thinking skills in children. Parents still encourage standard rote learning, and most of them are still living in denial of the 21st century workforce requirements," say Ruchi and Anju.

However, they have been overcoming this through seminars, camps and events that talk about the relevance of higher order thinking in today's world.

Another challenge has been coordinating programmes, since the team at Cogitus is spread across different geographies. On how they are getting past this hurdle, the co-founders say that video conferencing has been a boon, and that they have steadily developed a “multi-zone work culture”.

With a vision to develop higher order thinking in children across the globe by the year 2020, Ruchi and Anju plan to further expand nationally. Over the next year, they also aim to start centres in countries like UAE, Qatar, Saudi Arabia, and Oman.

To other budding entrepreneurs, the co-founders have some simple advice:

"Work in the field you are passionate about. Challenges will arise, but if you are clear about pursuing your goals, you will find creative solutions. Think big and don’t work with prejudice."