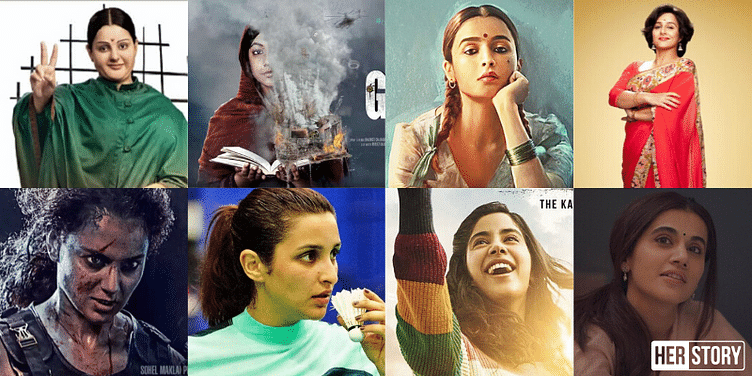 Most people loved ‘Chhapaak’, while the jury’s still out on ‘Panga’. If you enjoyed them, HerStory has a treat for you: a list of women-led movies that you must put on your ‘watchlist’ this year

In the last few years, the narrative in Bollywood has changed, and a number of women-centric films have been released. The year 2020 will see an array of films with women in leading roles hit the silver screen. Deepika Padukone-led Chhapaak was the first such film. It released in mid-January, and was followed by Kangana Ranaut’s Panga, which was released this Friday.

Keen to know what else is coming up? Her Story lists some of the top women-centric films that you must keep an eye out for this year.

This biopic on Shakuntala Devi, popularly known as the human computer, is set to come out in May 2020. Starring Vidya Balan in the titular role, the movie is directed by Anu Menon. Shakuntala Devi, the Indian author and mental calculator, made her way into the Guinness Book of World Records in 1982. She passed away in 2013. The movie aims to celebrate Shakuntala Devi, who made math fun. Vidya Balan is seen sporting a short bob in the first look of the film and calculating sums on her fingertips.

The film, starring Janhvi Kapoor in the lead role, is another biographical drama based on the life of Gunjan Saxena, the first female Indian Air Force pilot in combat along with Sridivya Rajan. Gunjan Saxena was part of combat during the Kargil war and evacuated injured soldiers from the war zone in 1999. Gunjan and Flight Lieutenant Srividya Rajan faced fire for their choices, but never backed down and continued to follow their dreams. Gunjan even received the Shaurya Chakra for her bravery. Their inspiring story, directed by Sharan Sharma, is set to hit the screen on March 13, 2020.

A film that has already created some controversy is this biographical depiction of politician and actor Jayalalithaa. Starring Kangana Ranaut, the film is based on the life of the late Tamil Nadu Chief Minister. The film is set to release in June 2020 in three languages - Tamil, Telugu, and Hindi. The first look of the film has impressed many, and with Kangana in the driver’s seat, this one’s sure to do well.

Taapsee Pannu is back with another woman-centric film. Known for her realistic portrayal of bold characters, she is all set to portray the role of a wife in this movie that explores the basis of a man-woman relationship and gender equality in the marriage. Director Anubhav Sinha and Taapsee, the combination that shone in Mulk, are sure to put forth a compelling story.

Based on Hussain Zaidi’s novel Mafia Queens of Mumbai, this movie directed by Sanjay Leela Bhansali is an Alia Bhatt starrer. The biographical crime drama is based on the life of Gangubai Kothewali, a matriarch brothel owner in the 60s. Known as the ‘Madam of Kamathipura’, she was one of the most influential pimps in Mumbai due to her underworld connections.

This sports biopic is based on the life of the ‘queen of Indian badminton’ Saina Nehwal. Directed by Amole Gupte, the ace badminton player will be portrayed by Parineeti Chopra. Manav Kaul will portray the role of Pullela Gopichand, her coach. The movie is scheduled for release early this year.

Gul Makai showcases the life story of Malala Yousafzai, the youngest Nobel Peace Prize winner. Directed by HE Amjad Khan, the movie follows “the girl who stood up for education and was shot by the Taliban”. The film will be the Bollywood debut of child actress Reem Sameer Shaikh. Malala, who grew up in the Swat Valley, campaigns for girl child education across the world. The film is slated for release on January 31, 2020.

Another Kangana Ranaut-starrer, this action-packed film casts the actress in a feisty role. Directed by Razneesh Ghai, the film sees her break stereotypes and showcase martial arts and Gun Fu (a portmanteau of gun and kung fu). The film is set to hit the screen in Diwali this year.