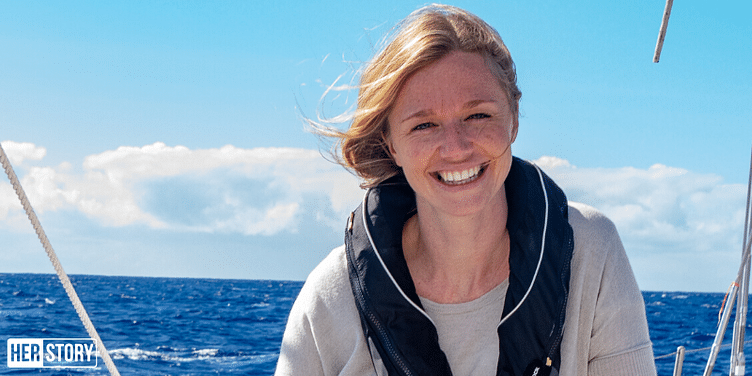 From researching an eco-city in Shanghai to hitchhiking on a boat to Australia, Emily Penn tells us how she began eXXpedition, a two-year project with 300 women circling the globe, and looking at the plastic in accumulation zones, the Arctic, and the storytelling that comes along with it.

Emily Penn is an architect turned sailor and environmentalist. Her journey began with writing an dissertation on an eco-city in Shanghai. For this, she travelled from the UK to China through “slow” travel – also using trains, horses and camels along the journey. Soon, she fell in love with the concept of “slow travel”. A year later in 2008, she landed her first job in Australia. She decided to hitchhike on a boat. On the voyage, she saw the ‘Great Pacific Garbage Patch’.

“It just didn't make any sense. I had no idea why it was there. That was the moment that has led to the last 12 years of first finding out what was going on and then starting to do something about it,” she recalls.

After beach clean-up projects and several research projects, she set up eXXpedition in 2014 and leads an all-female voyage around the world to help tackle ocean pollution, mainly from plastic.

In a freewheeling conversation with HerStory, she throws light on microplastics, the science on these voyages, and how we can all help in the movement against plastic pollution in oceans.

HerStory: Why did you decide that these voyages will have only an all-female crew?

Emily Penn: After several years of researching plastic at sea, I realised that the plastic was actually getting smaller into what we call microplastics - tiny pieces, smaller than your little fingernail. They are getting into the food chain, along with other chemical pollutants, pesticides and flame retardants that exist in our oceans.

It prompted me to do a study where I looked at my own blood to find out which of these chemicals were also inside me.

Twenty-nine out of the 35 toxic chemicals banned by the United Nations were in my blood. Most of these were endocrine disruptors - they mimic our hormones and stop important chemical messages moving around our bodies. For women, having these chemicals inside us during pregnancy is really bad news as it can be passed onto the offspring. It made me realise that this is quite a women's centred issue, which is why I initially decided to tackle it with a team of women.

We set off on our first voyage in 2014 thinking it was going to be a one-off trip, but I had such a positive experience from taking a group of women to sea, the powerful bonds that were formed that I decided to carry on.

HS: How do you select the women that go on the voyage with you?

EP: Every leg, we have 10 women join us and we try and take as many nationalities and different disciplines as possible. So we try and have on board a scientist, a journalist, a teacher, an artist, a policymaker or an industry leader, a product designer, people from all different sectors, because we realise that there's no silver bullet solution for solving the plastics issue. We try to select based on diversity of background and skills and nationality, but also based on who has the biggest potential to make the biggest impact when they get back home.

HS: What kind of scientific experiments are you conducting on this voyage?

EP: The scientific work has really evolved over the years. And at the beginning, it was about trying to understand how much plastic is out there and where it is. We initially thought that there would be these islands of plastic in the middle of our ocean that we could potentially clean up. Then we started to realise that the plastic is more like a soup, which is very hard to clean up. This led to the next bit of research, which was trying to understand the impact of plastic on marine life and humans. Now our research is very solutions focused. We are trying to find out what type of plastic is there and where might it come from to indicate where the solutions lie on land to prevent it.

HS: How do you think we can stop plastic pollution at the source?

EP: A lot of it is working on redesigning our products itself that are currently made from plastic. Packaging for example, is made out of a material plastic that lasts forever, but we only use that packaging once and then it's thrown away. There's a limited amount of recycling; only nine percent of our plastics' recycled, globally. We need to improve our waste management systems. We need to make products in a way that they can be reused, disassembled and turned to new things. So partly products, partly systems and legislation to make all of that happen.

HS: In developed and underdeveloped countries where hunger and poverty take precedence over tackling plastic pollution, how can we make people more aware of the problem?

EP: We need a top-down approach, but we also need a bottom-up approach at the same time. We need to make producers more aware to provide the solutions we all want. As consumers, we also need to make sure that we are buying the products that send the message to the producers. In a lot of parts of the world, we almost can't afford to be sustainable at the moment, because there are bigger challenges and for sure, they need to be addressed at the same time as these wider issues.

HS: What kind of actions are immediately needed to tackle plastic pollution in the oceans?

EP: We need legislation to incentivise industry to redesign their products. So essentially, you can kind of tax the waste companies are producing so that they have extended producer responsibility. That's one piece of legislation that we need at the moment.

HS: What do you think has been your biggest challenge till now?

HS: What would you consider to be your biggest achievement?

EP: The fact that we did get that awareness. Certainly getting this eXXpedition, around the world voyage off the ground, which is a two-year project with 300 women circling the globe, and looking at the plastic in the accumulation zones, the Arctic, and the storytelling that comes along with it. Then the legacy of these women when they go back home and take with them new insight, and the many possibilities to create an impact.

HS: Can you tell us what small changes and efforts we can make to help the movement against plastic pollution?

EP: It usually comes down to single-use plastic. It is really what we need to try and eliminate from our lives. My kind of best tips are just to look at anything that you use in your life that is plastic, and it's maybe there for half-a-day or a day, that's the plastic you can manage without. So first eliminate that. Beyond that look at the wider role that you might be able to play in this issue. Can you lead a campaign in your community or your workplace? Or your country to create the change that you want to see.