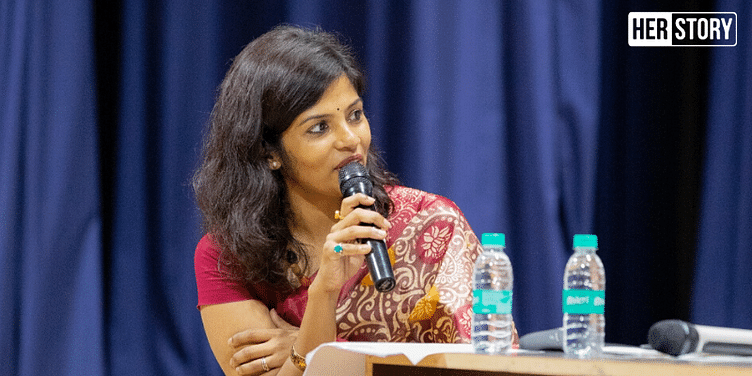 Shruti Nair is the director of Youth Years at Ashoka, a non-profit organisation that helps social entrepreneurs become changemakers.

As a child, Shruti Nair was fascinated with the stories her father told her about his work. As an employee with the Indian Space Research Organisation (ISRO) in the Development Communication division, he rooted for the use of communication technology for development and social change.

He was part of the SITE experiment, which worked with satellite television and its use for development. He would come back with stories on how satellite imagery helped villagers in the remote parts of Gujarat with agricultural knowledge. Shruti became hooked onto the idea of communication technology and development, which led her to her first career as a journalist.

After working with various media houses in India, she went to Singapore to pursue a Master’s degree in Mass Communication which ultimately drew her to the social sector. She later moved to the US for her PhD in Communication Technology for Development. After completion of her doctoral research, she returned home to what she always wanted to do – make inroads into the social sector.

Today, Shruti Nair leads the Youth Years programme at Ashoka for the South Asian region. Ashoka is a non-governmental organisation that helps social entrepreneurs amplify their changemaking efforts. The Ashoka fellows include Nobel Laureates Kailash Satyarthi and Magsaysay awardee Anshu Gupta, among others.

At Ashoka, she is the director of Youth Years and helps find and nurture young changemakers through the Ashoka Young Changemakers programme.

In a conversation with HerStory, she talks about why we need young changemakers, working closely with schools and also the government sector to bring in change.

HerStory: What is your aim with the Youth Years programme?

Shruti Nair: We are trying to make our society reimagine how every young person is growing up in our society. So, we work with schools and ministries, and the government to completely reimagine how we are growing up in a society. It is very important for us because our larger mission as an organisation is 'Everyone a Changemaker’, which essentially means that if each one of us is able to recognise ourselves as a change maker, the world will be a completely different place.

HS: Tell us about the Ashoka Young Changemakers programme?

SN: The Ashoka Young Change makers programme is about finding these role models, who are entrepreneurs or changemakers who work on various social issues like menstrual hygiene, climate change, and others. We started identifying these young changemakers in the age group of 13 to 20 who have found a social problem, built a team around it and created an impact.

We identify them and give them opportunities where we can position them as role models. We put them in touch with the right platforms and more importantly, build a community of these change makers who then work together in helping the larger community and society realise the power of change making.

These 5 women changemakers from Kerala are shattering stereotypes

HS: Why the focus on young people?

SN: Over a period of time, we noticed that just a handful of these 3,000-4,000 social entrepreneurs are not enough to solve the kinds of problems that exist in the world. When we started speaking to our social entrepreneurs, we realised most of them had started very young, almost 80 percent of them had started when they were teenagers. We then realised that it is important for each one of us to then grow as a changemaker.

With these young changemakers, we are trying to create role models in society. Growing up, we have all had role models in cricket and in the entertainment industry, but it's important our young people grow up with these children as role models, so that they also realise how important it is to solve problems in their community.

HS: What are the criteria for selecting these young changemakers?

SN: They should have identified a problem, have built a team around it, and should have demonstrated impact. Within that, there are certain sub-criteria we look at - have they been able to work with multiple stakeholders, and how deeper have they looked at a problem? So, there are a bunch of these parameters, but again, since they are young people, we don't really measure them like we would do for a Fellow.

HS: Can you tell us about some of these changemakers?

SN: We have a very interesting set of people. We have a gentleman, called Akash Singh, from Delhi, who works with the problem of temple waste. He works with prisoners and gives them gainful employment. These inmates create beautiful showpieces and artefacts from the temple waste. There's another young changemaker, Disha Shah from Chennai, who provides training in financial literacy to women across different socio economic groups. She essentially creates awareness and helps women take care of their finances.

HS: What are the skills required in a changemaker?

SN: One is cognitive empathy. It's not just about feeling passionately about the problem that the other person is facing, but also doing something about it. Second is collaborative teamwork. You need to know how to work with different stakeholders, different kinds of teams, and create a network of larger teams where its operations should be as smooth as our brain functions. New leadership is the third skill, where a leader will help everyone around, identify the leader within and let everyone have an equal say. Lastly, creative problem solving, which is a very critical skill for a change maker.

We call them skills precisely because these are things that we all have. But like any skill set, they need to be practised and honed.

HS: Do you teach these skills when you collaborate with schools?

SN: We have changemaker days, which is like an awareness programme for where we help schools understand how important it is for their kids to grow up as change makers. We have been able to influence the curriculum in a way that change making has become a part of. The education system needs to significantly change because of that.

HS: Where do you think the current education system is in terms of providing these values?

SN: If you go back in time and think about the literacy movement, there was a time where reading and writing was not important. There was a school of thought that kept saying literacy is very important. But another school of thought didn't really see value in it, they were fine with being the way they are. I think we are at that stage when it comes to changemaking. So, it's about bringing them up the curve and helping them see how critical it is.

HS: Is it difficult to work with the government to change the curriculum?

SN: Any change is difficult. It doesn't matter who you are working with, even change at a personal level change is difficult. When you take that change and amplify it to a systems level, the layers just multiply. To create any sort of large-scale impact, the government becomes a very key stakeholder. We have to work with both state and central levels, it’s difficult but not impossible.