How a woman from a conservative family went on to achieve Rs 1,000 Cr revenue for McDonald's in India 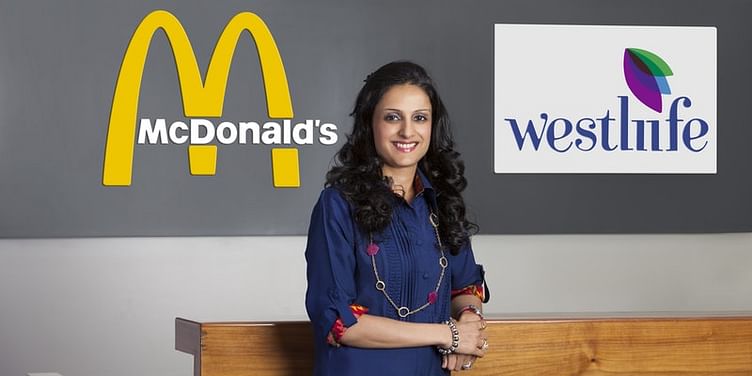 Smita Jatia is the Managing Director of Hardcastle Restaurants Pvt Ltd - the master franchisee of McDonald’s in West and South India.

Born and raised in a conservative Marwari family, Smita Jatia was married at the age of 18, before she could even complete her bachelor’s in Commerce from Sydenham College of Commerce and Economics, Mumbai.

At 22, Smita became the mother of twin boys and thought that her life was all settled as she focussed on parenting. But life had other plans.

She spoke to HerStory about how she contributed to making one of the world’s best-known chain of fast-food restaurants a household name in India.

In 1996, her husband Amit Jatia set up Westlife Development Ltd, the company that runs the McDonald’s chain of restaurants in West and South India through a wholly-owned subsidiary. Smita officially joined McDonald’s two years after the brand entered India.

“I had some brushes with the business before as I was intermittently helping Amit organise key global visits and events. It was at one of these events that a global partner proposed that I join the business and lead marketing for the brand. I was, of course, very excited but at the same time a little nervous as I had never worked before. It was Amit who really encouraged me and gave me the confidence to take it up and I seized the opportunity,” she recalls.

Within a month of taking the decision, Smita enrolled at the Hamburger University in Chicago, US, training to be a marketer. And she says, there has been no looking back since.

Smita joined Hardcastle Restaurants Pvt Ltd (HRPL), (the subsidiary that operates McDonald’s restaurants), as the Marketing Lead in 1998, and laid the foundation for the brand in India through memorable campaigns. Slogans like ‘McDonald’s mein hai kuch baat’ (McDonald has something special) and ‘Aap ke zamane mein, baap ke zamane ke daam’ (At the prices in your father’s generation) she believes, resonate strongly with customers.

A few years into marketing, Smita’s innate hunger for learning and pushing her limits led her to pursue a course in General Management at Harvard University.

“What I learnt there was invaluable. It not just helped me understand the business management principles but also gave me a perspective that I could have never got otherwise,” she says.

When she returned, she took to the task of heading functions including people resources, training and operations, and eventually was given reins of the company as the Managing Director in 2010.

“Since then, we have achieved many milestones like expanding our footprint to over 40 cities, reaching the Rs 1,000 Cr revenue mark, launching business extension – McCafe, McBreakfast, and McDelivery, introducing the brave new concept of ‘Experience of The Future’ stores and setting innumerable industry benchmarks,” she adds.

When McDonald’s entered India in 1996, Smita says, the western fast-food market in the country was practically non-existent.

“Most Indians had never tasted burgers. McDonald’s to them was a quintessential Western brand. The challenge, therefore, was to create a completely new market and get Indians to try burgers. It was not an easy journey as it started right from indigenising the menu and creating a business model that meshed the global brand with local sensibilities. We introduced innovative new menu items, communicated our veg, non-veg segregation story, deployed a strong menu price strategy and created campaigns that touched a chord. All these factors came together to eventually make McDonald’s a household name,” she says.

Smita strongly believes in looking at the business from a consumer’s lens. She says McDonald’s competitive advantage lies in being able to evolve at a very fast pace and give customers what they want, even before they demand it.

“Right from creating an entirely new menu for the Indian palate, launching a compelling menu-price strategy, giving our customers more reasons and occasions to visit us through our brand extensions, launching ‘Good Food Journey’ – an initiative to re-engineer the entire menu to make it more nutritious and wholesome – customer has been at the heart of all these initiatives,” she explains.

As an increasing number of millennials join its customer base, Smita is looking forward to weaving technology across the business to stay relevant. The company’s digitally-enabled ‘Experience of The Future’ restaurants have self-ordering kiosks, table trackers, digital menu boards and even gaming pads and air-chargers to keep the customers engaged.

As the only female leader in the QSR space, Smita asserts that her gender didn’t bring her any challenges:

“In my journey, I never faced any challenges or roadblocks because I am a woman. Of course, it helps in a big way when you have the support and encouragement of your family, which I always had. During the course of my journey, I had to be away from my children who were growing up, had to leave them when I was at Harvard. However, the support of my husband, my in-laws and the entire family made these difficult decisions easier for me,” she says.

The company reported a revenue of Rs 4,329.3 million for Q3FY20 – a 16.8 percent increase over the same quarter last year. Its Same-Store Sales Growth (SSSG) stood at 9.2 percent, marking the 18th consecutive quarter of positive same-store sales growth for the company. She also recently featured in the Forbes Asia’s ‘Power Businesswomen’ list, being one of the four Indian entrepreneurs in a list of 25 women from across the Asia-Pacific region.

Smita says that her company has also formulated an ambitious Vision 2022 plan:

“We plan to have 400-500 restaurants across West and South India with a Rs 2,000-2,500 crore revenue by 2022, healthy mid-teen margins and a sustained and consistent 7-9 percent SSSG. I am happy to say that we are well on our way to achieving this vision.”