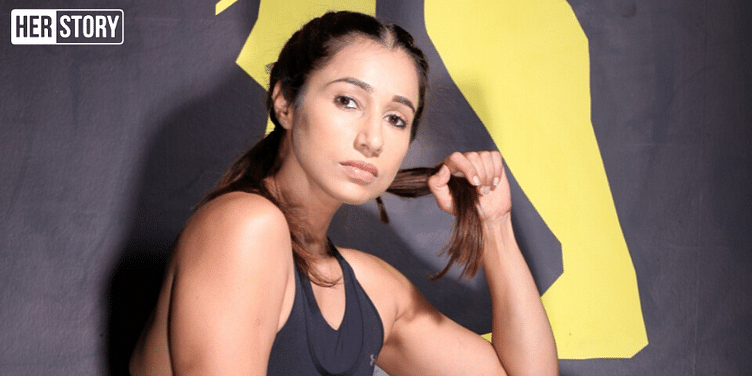 Diksha Chhabra was diagnosed with depression and PCOD and decided to start on a fitness routine. The weightlifter and social media influencer is now a certified nutrition and personal trainer with over 600 successful client stories.

Diksha Chhabra was 28 years old and suffered from depression, hormonal disorders and massive weight gain. At this point in her life, she remembers being at her lowest.

“I had no enthusiasm to play my roles as a mother to a toddler, a wife to my husband and most importantly I did not have any ambition for my own existence,” Diksha tells HerStory.

After getting married to a military official, Diksha was unable to continue her corporate career. In 2015, she gave it up completely to take care of her son. During this time, she was diagnosed not only with depression, but also PCOD. In 2013, she was also diagnosed with hypothyroidism. Diksha weighed over 100kg as a result of the disorders. She also blames it on her sedentary lifestyle.

Diksha vividly recalls instances of being body shamed because of her weight. In the army setup fitness is top priority not only for officials but their partners as well.

“Body shaming in the social circle became my new normal at that time,” she recalls.

Diksha narrates instances at social occasions where she would be compared to other ‘fit mums’ and girls at the gatherings. Some would enquire if she was pregnant and this constant body-shaming made it difficult for her to attend school reunions, and family gatherings. It affected her to an extent where she started hating herself and lost all confidence.

However, it wasn’t the body shaming or the hateful comments that led her pick up an active lifestyle. Her PCOD diagnosis was the turning point. PCOD is a hormonal disorder that causes enlarged ovaries and can lead to several conditions like cysts, infertility, diabetes, heart disease, etc.

Diksha realised that her lifestyle was wrought with bad eating choices, little physical activity and excessive stress due to work and other hereditary issues. Deciding to take her health in her own hands, a determined Diksha started working out and improving her eating habits.

Due to her weight, exercising was difficult, but she started small. She began going on walks and cut off junk from her diet. However, not being aware of proper exercise and nutrition, she started with combined cardio exercises and starving herself in 2016. She quickly lost 18 kg and the lack of nutrition became evident with weakness, hairfall, insomnia and loss of strength. This is when she started reading about the right ways to lose weight, and the importance of nutrition and exercise. This led her to her tryst with weightlifting.

“It (weightlifting) was very appealing. I was an active child both in sports and dance during my educational years. Being lean was never an objective then too. I always strived to remain healthy and strong. Weight training was just the right way to meet my goals and this is when I started lifting weights and fell in love with it,” says Diksha.

The daily hours of hard work in the gym were showing results on her body, but the benefits it had on her mental health were far more pronounced and soon she realised the benefits of an active lifestyle.

“Strength training helped me to get over my depression, boosted my confidence, I was no more scared to be in social circles; rather every time someone praised me for my hard work it made me more determined to continue,” says Diksha.

It took her a year to become healthy enough to stop her medication for lifestyle disorders.

Diksha had a rollercoaster journey to achieve self-development and growth. Her struggles and tribulations, confusions and desperation made her turn into a fitness consultant, certified sports nutritionist, and wellness coach.

After just two years of being a weightlifter, she started Diksha Chhabra Fitness Consultations to help others get fit with proper nutrition and guidance.

“I did not want anyone to go through the same miserable feeling, which I had to feel due to my weight and depression. I know how lost one feels at the beginning of the journey and how easy and smooth it can become with someone's right guidance and support,” Diksha says.

While documenting her progress on social media, Diksha - now an established social media influencer with 124K followers on Instagram - was introduced to several others who were going through the same and wanted to make a positive change. Hence, she launched her fitness consultancy after getting certified in nutrition and personal training.

She began with four clients and in just under three years, she has trained more than 600 individuals across the globe. Her company works on the simple motto of customisation and flexibility through small and doable acts in everyday life.

Her bootstrapped startup offers three programmes. One is a three-month program for anyone who wants to lose weight or gain muscle called #LETSLIFTWITHDIKSHA; a post pregnancy weight loss #FITTERME plan that caters to mothers who are four months post delivery or above postpartum and helps in post-delivery healing and regaining of strength. The third one is a shorter three week introductory plan for beginners to fitness - #TRANSFORMATION21.

Diksha has not only overcome social and physical barriers but has shattered stereotypes along the way.

Weightlifting was considered a “manly” activity. When she started, people believed the myth that women who lift weights start looking like men. Often, she was told that she had started looking masculine or “not lady like” because she was strong and not lean.

“I think the bubble has broken now. I see many women trying this form of exercise just like men and it is no more a taboo,” says Diksha.

In 2017, she participated in Mrs India Earth beauty pageant with little professional knowledge and training. She competed at the national level competition with 45 other finalists and secured the second runner up position and was the winner in the Fitness category. Weightlifting for women was new and it was rare to see a beauty pageant winner smashing heavy weights in the gym.

For other women who are going through similar challenges due to health issues and want to take up an active lifestyle or weightlifting, Diksha advises,

“Don’t do it for your husband or boyfriend. Don’t do it because you need to get married or because there is a family function coming up. Do it for yourself and your body. You owe this to yourself. You are totally worth it.”