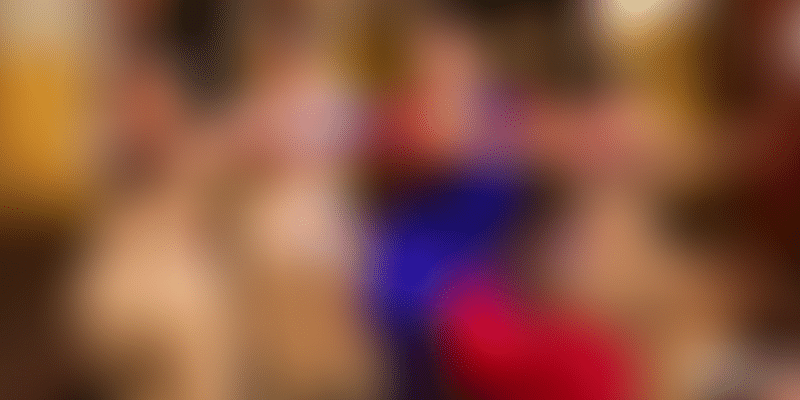 Savitha Sastry gave up a career in neuroscience to take up dancing full time. Today, she’s working with her husband to popularise Bharatnatyam through the digital medium.

In the mid-2000s, Savitha Sastry gave up a career in the corporate world and turned to dancing full time.

The neuroscientist thought it was the perfect time to return to what she always wanted to be: a dancer. Two decades of work gave the family a safety net in terms of money and would let her focus on her passion, Bharatnatyam.

However, she had never really taken a break from being a dancer, having been initiated into Bharatnatyam at the age of five, an art she held close to her heart through various stages of her life and career.

Born in Hyderabad to a Tamil family, and raised in Mumbai and subsequently Chennai, Savitha relocated to the US where she completed her master’s course in neuroscience. She went on to live and work in the Bay Area.

“I always enjoyed the research side and my work was mainly in the domain of neuro-degenerative diseases such as Alzheimer’s, Parkinson’s, Huntington’s etc. After I graduated, I was employed with a major pharmaceutical firm in the US in their R&D department,” she says.

Shall we dance: Here’s how Astad Deboo conquers boundaries with his choreographed moves

“Dance continued to be in my life – I was teaching dance to children of the Indian diaspora, though it was mainly to sustain my meagre scholarship income! When I was working, dance was a weekend occupation – my productions from those days are Purushartha and Sacrifice. It was in the second half of the 2000s that I became a full-time professional dancer,” she adds.

Looking back, Savitha categorises her life in the arts into three parts. The first was doing traditional repertoires, from her teens all the way through mid 2000s.

From 2008 onwards she stopped doing traditional pieces (margams, as they are called), and instead started performing dance theatre productions based on her husband and writer AK Srikanth’s stories, and notable for being novel storylines not based on mythology or religion. The third phase is the one she has been in since 2018 – making dance films for the digital media.

Her aim is one: to evangelise Bharatnatyam through the power of the digital medium.

“In 2018, we decided to digitise all our productions. The idea had always been to evangelise Bharatnatyam; the move to the digital medium was an obvious decision because of the overpowering reach that the digital medium offers. I think stage performances carry massive logistical challenges that are not always justified by the numbers that watch it. At best, a stage performance can get a few hundred in the audience – you would get that in minutes online,” she explains.

The duo first filmed some of Savitha’s previous productions (Yudh, Chains, and Prophet) as full-length productions.

The turning point, Savitha avers, came in 2019, when Srikanth met a young millennial who asked him if he could narrate a story in five minutes.

“Srikanth was amused at first, but the challenge led to the making of Descent – our first made-for-digital film. The success has us pursuing more in this direction – thus came Awakening, Aparajita, and the Colors Trilogy, which we are working on now. These are all short films – 15 minutes or less - that tell a story through Bharatnatyam.”

The duo also started Inner Circle, which they claim is the largest free online community of Bharatnatyam learners (1,800 and counting). It’s designed for students and connoisseurs of Bharatanatyam to hone their techniques and learn the correct fitness methods required to sustain long years of dancing. It offers a number of categorised and catalogued videos so any member can easily access the part s/he would like to study.

Savitha has also performed 100 live shows across five continents, and narrates one experience that will always remain a memorable one.

“During my early days in the thematic stage tour days – this was when we were performing Soul Cages in Kolkata – a woman from the audience met me after the show. She told me that she was a cancer survivor, but in that one hour she forgot about her pain, the chemotherapy, and the stress. That moment alone is worth every minute I have put into this art form since I started,” she says.

Taking the art out of traditional chains

The husband-wife partnership forms the core strength of all their initiatives. According to Savitha, Srikanth has little interest in Bharatnatyam per se.

“To him, traditional performances were too codified and repetitive; he found them boring, and still does. What he believed in was the beauty of the dance form. It was his idea that we take Bharatnatyam out of its traditional chains, and use it as a vehicle to deliver a novel storyline.

“He is the writer, director, and producer of all the work that I have done in the last decade and a half – so I think the right way of looking at it is that he has chosen me as the lead dancer in all his projects. The music behind these productions, which has been so largely appreciated, also comes from his vision,” she says.

The duo’s biggest project is to guide more and more young dancers to be able to evangelise the beauty of Bharatnatyam to the uninitiated. They are doing that through the Inner Circle and the limited students she takes on for an immersive art experience in her Gurukul. The duo also plans to produce a dance series telling stories for very young children.

“A couple of years ago, I had the opportunity of attending a Kabuki performance in Tokyo. I was stunned to see the packed house on a working day for a mid-afternoon show. That is where I would like Bharatanatyam to be – and whatever I do would be in line with this vision,” she says.