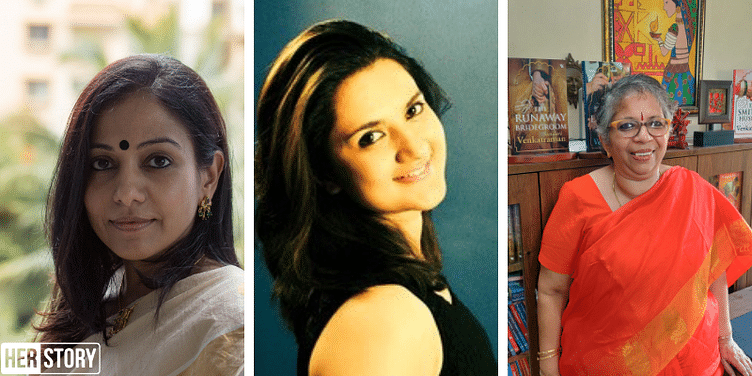 In 1928, feminist writer Virginia Woolf, wrote in an essay, “A woman must have money and a room of her own if she is to write fiction; and that, as you will see, leaves the great problem of the true nature of women and the true nature of fiction unsolved.”

A century later, women writers are claiming their space in the literary world, and rightly so. They are being published and read in great numbers and enjoy huge popularity as well.

While women always require a safe space to express their opinions, self-publishing has removed other barriers surrounding traditional publishing - such as the need for copious amounts of time and money, concerns surrounding ownership of one’s work, and the ability to reach readers on a global scale.

Self-publishing has enabled women to pursue writing as a career option, one which is flexible and can be managed on their own terms. It also provides them the opportunity to be creative, build an audience, and grow. And also make money in the process.

Leading the self-publishing space is Kindle Direct Publishing (KDP) that helps authors and publishers keep control and publish their ebooks across the world on Kindle.

Amol Gurwara, Country Manager, Kindle Content India, explains, “Women find publishing through KDP beneficial as it gives them flexibility and complete control over their time and work, i.e., they can write and publish at their own pace. They are able to publish for free and reach global audiences. With attractive royalties of up to 70 percent and Kindle Unlimited plans, they are able to earn a steady income while balancing their family lives and roles of being a homemaker. In addition to this, the processes on KDP are designed to be easy, convenient and transparent. From uploading a manuscript, publishing an eBook, marketing, tracking sales and royalties earned- there are multiple tools and services made available that make the journey of sharing one’s story seamless and enjoyable. They also retain all rights of their work which they can then leverage to earn beyond eBooks, like commissioning scripts for web-series, audiobooks etc."

This opportunity to self-publish via KDP has spawned many success stories. Authors like Sundari Venkatraman, Sashi Murali, and Saiswaroopa Iyer have leveraged the success they received on KDP to transition from being homemakers to fulltime writers. Sudha Nair and MV Kasi are professionals who went on to pursue writing as a career, as their success on KDP has enabled them to earn a livelihood from their passion.

HerStory features three popular women authors who are using KDP to publish their works and also earn an income.

Sundari Venkatraman grew up in Chennai and shifted to Mumbai when she got married 36 years ago. She was content as a homemaker, raising her two children. However, as a voracious reader, she always wanted to write.

“I was almost 40 when I began to write my first book, The Malhotra Bride. The stories suddenly burst forth from me as if a dam was broken and I couldn’t stop writing until I finished three novels in the span of six months. Until then, I hadn’t given a thought to getting them published. This was way back in 2001 and I wrote to several publishers around the world at that point. All I have to show for my efforts are rejection letters and emails,” she recalls.

In 2014, a friend of Sundari’s pointed her in the direction of KDP.

“At first, I thought I might find it difficult to self-publish my books. After all, I was 53-years-old at that time. But as I didn’t have anything to lose, I went ahead and published my first novel on February 11, 2014. Today, I have fifty books on Amazon; a few of them have also been published as paperbacks by traditional publishing houses,” she says.

Later, after becoming a bestseller, Sundari was approached by traditional publishers.

“I accepted a couple and rejected a few. But the point is that I don’t want to ever give up my eBook rights. As a KDP author, I earn really big money for one thing. As for another, I can write and publish at the pace I want. There’s no one to tell me that I should pace out my books; bring only one title in a whole year and more conditions along those lines,” she says.

She has published a few series, The Bansal Legacy, The Thakore Royals, Written in the Stars series, The Groom Series, Marriages Made in India series - each consisting of three or more books. Her Romantic Fantasy and a Historical Romance (#1 Bestseller on Amazon.in for two months).

On November 14, she released her 50th book, Taurus Temptation, the third book in the six book series, Written in the Stars.

She received her first income of Rs 400 on April 1, 2014, from KDP. With 49 books (she had to pull down a few of her eBooks as she signed them up for traditional publishing; her 50th book was published only in November) by October 2020, she has made Rs 40 lakh after paying tax.

Sundari is currently writing a standalone romance Once Bitten, Twice Lucky and another historical romance The Rebel Princess.

“All I can say is that Amazon KDP has placed the reins of my author life in my hands and I am truly grateful for that,” she says.

Nandini Kumar’s first story was published in the Women’s Era when she was 16. Since then, she has made writing a constant endeavour in her life. As her writing started taking shape, she says, she knew she wanted to tell stories not just in English but in Hindi as well. Her first book, Baaki ki Baat, was published in 2017 by Hindyugm, and in 2019 she wrote Neeli, which went on to win the Kindle Direct Publishing Award.

“After my first book Baaki ki Baat was published, I wanted to write more and reach more people. The Hindi Publishing industry’s reach is not as wide as it is with English. I wanted to have a fair ground and Kindle Direct Publishing gave me that. It went beyond my expectation as people from across the globe started writing in, tagging my book on social media, telling me how refreshing it is to read Hindi on a screen,” she says.

Her Hindi Novel Neeli on Kindle Direct Publishing is the story of a young woman who has just moved to a hill station in search of happiness after the end of a relationship.

Nandini believes that to really earn from writing, one has to be not just productive but innovative about selling their work too.

“Receiving the prize money of Rs 5 lakh was a big boost for me and gave me the courage to invest time and energy in self-publishing. When it comes to royalties, KDP is very fair. It lets you choose your royalty, which is then paid to you every month. You can track your sales as well as royalties earned by logging into your account. You can even see how many copies of your book are being sold and track your graph over a period of time. Everything is transparent.”

Nandini is already onto her next project – writing for children and young adults.

After working as a software engineer for eight years, Sudha Nair took a break when she had children. Later, she stumbled upon a freelance writer position for an online technical magazine. After a few years, she gave up technical writing to pursue her real passion, which was creative writing.

“When I finished my first novel and sent it to a few traditional publishers and did not hear back from them, I decided to self-publish. It was received very well by the readers and it won the KDP Pen-to-Publish Contest award,” she recalls.

Since then, there has been no looking back. Sudha has published nine books on KDP and is now a successful author.

“The strengths of KDP are its ease of use, the thousands of readers already on Kindle, and the royalties paid to writers. I think it’s a much better deal than traditional publishers,” she says.

In the future, Sudha wants to write more books and try out different genres “because publishing on KDP gives me the freedom to pursue my varied interests in writing. I hope to build my readership over the years and have many more book deals under my belt”.