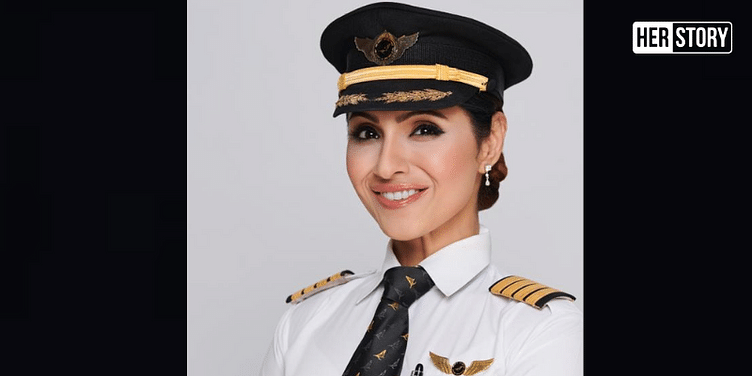 Air India’s Captain Zoya Agarwal has scripted history as the first woman to fly the Boeing-777 and more recently, the longest commercial flight in the world.

Air India commander Zoya Aggarwal and her all-woman cockpit crew recently scripted history by operating the world’s longest commercial flight that crossed the North Pole at 34,000 feet in the sky. With 250 passengers on board, the crew of four women captains in the cockpit had the world tracking their every movement in the sky.

Every person Zoya knew was tracking the flight since its take-off in San Francisco until it landed in Bengaluru where the team was greeted by members of the press and others – all huddled and armed with cameras to capture the moment. “The buzz hasn’t died down yet and it is best that such a celebratory atmosphere remains for as long as it can amidst the pandemic,” Zoya says, over a phone call with HerStory.

Flying the world’s longest direct flight came with a long checklist to tick off – from ensuring the equipment is in place to polar suits for any diversion in faraway airplanes, training the crew, and hoping the weather would be aligned with the mission.

While it may have been a tedious preparation for the past year-and-a-half, for Zoya the dream of becoming a pilot started early on, when she was just eight.

The dream to fly

Zoya was fond of stargazing and spent most of her time on the terrace of her house. As a child, she did not fancy toys or watching television but when she wanted a telescope, eight-year-old Zoya asked her parents to save up for it by doing away with birthday parties for a couple of years.

After she got the telescope, her parents would worry that she was not like the other children in the neighborhood.

“I used to just look at the sky, stargazing and spot the jumbo jets flying all over the place. I used to be very fascinated by the little flying objects and would be glued to their condensation trails and wonder if I will be able to fly one of them,” she recalls.

As the only child in a middle-class family with a conservative mindset in the 90s, when Zoya expressed her desire of becoming a pilot, her mother started to cry.

“My mother always wanted me to get married, have children, and look after the family and that's where the buck stopped. However, I was not one of those conventional girls or one to stop dreaming because the society around me told me not to do so,” she says.

After completing high school, Zoya pursued two full-time studies for three years. From 6 am to 3.30 pm, she would focus on her course at St Stephen’s College and then dedicate the latter half of the day until 9.30 pm to aviation classes.

“At times when there was no electricity, I would finish my assignments under lampposts till about midnight and make the routine work, no matter what.”

Her hard work paid off and also won over her parents who even took a loan to fund her studies and aviation exams.

In April 2004 when there was little job scope for pilots and Air India was the only airline flying international routes, Zoya cleared the entrance exams and earned one of the 10 vacancies for pilots at Air India – around 3,000 had their eyes set on these spots.

Since then, the aviation industry saw several milestones in gender equality world over, thanks to the fact that Zoya never lost sight of her dreams. In 2013, she became the world’s first female pilot to fly a Boeing-777.

She also led the Government of India’s Vande Bharat Mission in the wake of the COVID-19 outbreak that brought back over 14,000 Indians who were stranded abroad.

All for women’s empowerment

Women’s empowerment is very close to Zoya’s heart. She says, “Pretty much everywhere in the world women are not treated equally – there is discrimination against women regarding salaries and positions with no explicable reason.”

However, starting off at Air India gave her an equal footing professionally. “It is an equal opportunity employer in practice. Where else in the world can I become a triple seven commander and have the honour of being part of an all-women team making history by operating the longest commercial flight in the world?”

She emphasises that the pilot's seat doesn't know any gender. “From the beginning, you are trained as a pilot, not as a lady pilot,” she adds.

Today, young girls look up to her as an inspiration. Zoya is not one to take this lightly and considers it as a responsibility to empower young girls to “dream and work meticulously towards achieving it because the view is best from the top of the north pole”.

A spiritual person, Zoya says that with every achievement, she is grateful to her parents and the Almighty. She is happy that in nearly two decades of dreaming to become a pilot and then realising it, she has been able to turn her mother’s tears of fear into those of joy.