Meet Rama NS, one of the first women engineers from Karnataka who put Electronic City on the global map 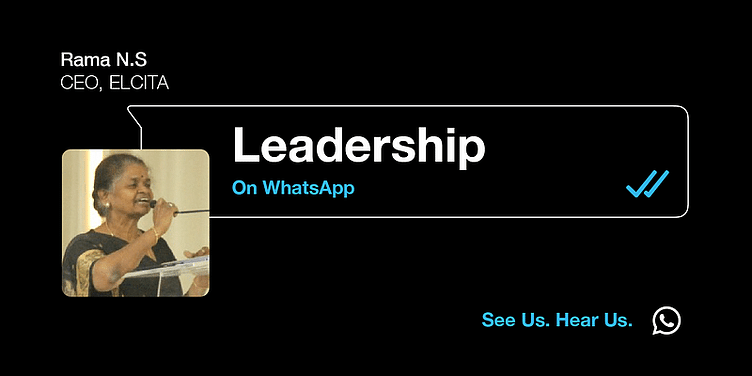 One of Karnataka’s first women engineers, Rama NS traces 50 years of her career at corporates like ITI, Infosys and now ELCITA. She dons multiple hats as a mentor, women’s rights supporter, and teacher.

Fifty years ago, Rama NS became one of the first women in Karnataka to graduate from an engineering college.

In the last five decades, the adviser of Electronics City Industrial Township Area (ELCITA), a first-of-its-kind self-governed municipality in India, tread several paths, battled many stereotypes, took on challenges head-on in diverse fields to become the formidable leader she is today.

In a conversation with HerStory, Rama traces the different aspects of her career — her engineering college experiences, her path-breaking work with NEC and ﻿Infosys Foundation﻿, changing technology or her initiatives against sexual harassment — not with pride, but with a lot of empathy and understanding of the times she lived in, and how they are changing.

At the outset, Rama believes one has to go beyond one’s comfort zones and keep learning on the job. She adds by saying that managing our ego is very important without compromising on self-respect and networking is an essential tool to get ahead in one’s career and life.

“I have always felt networking for women is a challenge considering they have so much to do. I have gone through days where there were no emails to keep in touch either personally or professionally. Now, private messaging platforms like WhatsApp are very useful in staying connected to relevant groups, especially for women,” she says.

While women’s groups on WhatsApp are inspirational and a medium to learn from one another, Rama cautions that the objective of these groups should be clear so they only create positive energy. When it comes to mentoring, one-on-one interactions online, like on ﻿WhatsApp﻿works better.

From electrical engineering to telecom

After completing her electrical engineering course in 1970 with a gold medal, Rama joined Indian Telephone Industries.

“In 1971, I was among the first women to be sent to IIT-Kharagpur to learn about microwave systems. Those days, girls were not sent anywhere and I appreciate my immediate boss for this opportunity. This was my first trip outside Karnataka that my parents let me go on,” recalls Rama.

In 1995, Rama moved to Infosys after seeing that things were not moving in ITI. Around the time, the IT boom was just waiting to happen.

She was 45 and her team was made up of boys and girls in their early 20s.

“I don’t know how they felt but I have always felt that being with young people makes you feel young,” she says with a laugh. She had no qualms in asking for information, and approaching young people to learn, and this, she says, made a huge difference in how she was perceived.

At Infosys, she became the delivery head for a large team of 4,500 people and a location head for Bangalore DC with 22,000 people. She also started mentoring women and became involved in various community activities.

Rama is currently Co-chairperson of anti-sexual harassment initiative in Infosys. Rama has trained members for conducting effective investigation. She believes in reformative approach and was responsible for redressing many cases and bringing justice to women during her tenure.

“Many women in the company used to come to me for advice especially when they wanted to quit after having a child. I used to tell them both are important and it may be difficult to come back after a long break and work at the same level. You have to build a support system around you so that you can manage both,” she says.

In 2009, Rama retired at the age of 60. At the time, she wanted to settle down to a normal life with her family. But that was not to be.

“As CEO of ELCITA, my responsibility was to take Bengaluru’s Electronics City to the next level and improve the quality of life of the people living there,” explains Rama.

With a focus on sustainable development of the industrial estate, she supervised all municipal functions including security, road maintenance, waste management, and providing companies a common platform and facilities centre.

This facility is established to aid MSME augment their product, conduct R&D activities, prototype, and test and build skilled manpower.

Currently, Rama serves as an adviser to ELCITA.

She believes though women have come a long way from when she first started 50 years ago, they still have to live up to expectations of handling both family and work efficiently.

“I think a lot of women doubt that they can do it. At every company I worked for, even while climbing on microwave antenna towers, I never felt I was a woman doing it nor did I ask for special privileges because I am one. I don't think that I'm a woman doing a task and that makes a big difference,” she says.

This story is part of a series spotlighting extraordinary, inspiring women from different walks of life for the See Us, Hear Us campaign powered by ﻿WhatsApp﻿for International Women’s Day. You can read more such stories from the month-long campaign here.