On a continuous learning path: The life and work of business leader Neelam Dhawan 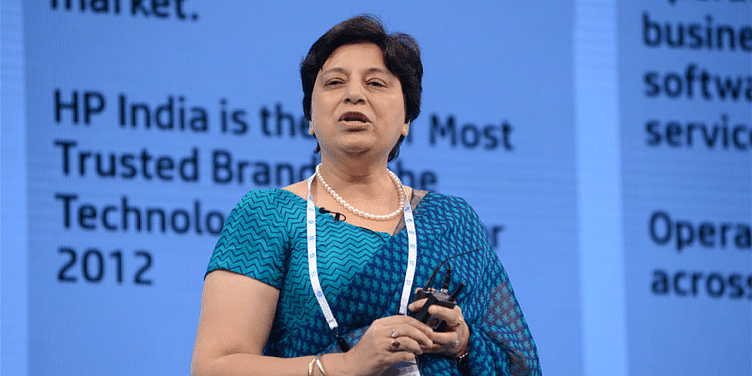 Neelam Dhawan, former Managing Director, HP, is now on the board of several startups and corporations. In a conversation with HerStory, she talks about her journey in the world of tech, when the industry was less than Rs 100 crore.

In 1982, a Delhi University MBA graduate Neelam Dhawan found it difficult to find a proper job. The reason was simple — companies that came in to hire for marketing roles didn’t believe a woman could fill the position.

She was advised to apply for a banking job. However, “It didn’t sit right with me. I had learnt about the then-new technology and programming languages like Fortran, and I had specialised in marketing. However, soon I got an offer from HCL,” says Neelam.

Today, after 38 years, she is touted as one of the most powerful women leaders in the technology world and has been instrumental in shaping the Indian IT industry.

Neelam has held leadership and core roles at HP, Microsoft, and IBM. She is also a supervisory board member at Philips, a non-executive director at Skylo Technologies, ICICI Bank, Capita PLC, and Yatra.

She says, “I will be advising the board on how to think of business, growth strategy, raising capital, and the overall growth for the company. When you look at Make in India, it is a simple thesis where we want to do manufacturing in India. This creates jobs and has a huge market. But the supply chain has massive challenges, and Moglix is in a unique area, and we have a huge opportunity in us as Make in India takes off.”

Neelam says most of her decisions were influenced by her parents and adds that it all started at a young stage.

“My mother always said girls have to be economically independent. She always said to me, do whatever you feel like, but you must have a life of your own and be economically independent. That influenced me a lot. My father, too, was a big believer that girls are equal to boys. He always insisted that my education wouldn’t be any less than my brother's. He was an advocate of girls having equal opportunities. That influenced me a lot to think about a career from a younger age.”

However, in the early ‘80s, a woman’s role was either to be a teacher or a caregiver. And many advised Neelam the same.

“I can't teach, I hate it. One day, my elder brother told me if you are serious about making a career, you must do a Masters and an MBA. That is how I did my MBA,” Neelam shares.

Thus, started Neelam’s journey into technology. In 1982, computers were a new, small industry of less than Rs 100 crore. She says in new fields, you learn as you grow.

For her, the high points were when she received external recognitions. Her association with NASSCOM also helped her during her formative years as she understood how government policies impact industries. In turn, she also worked with the crème de la crème of industries.

Can a woman take up responsibility?

“You feel people should look beyond that and look at you as a professional and what you are delivering, rather than just look at you as a woman. However, as you grow in your career, you outgrow it. I find many young women struggling, and as a society, I feel we haven’t transformed to recognise women and give them the right opportunities and stop doubting their capabilities. That sometimes pulls me down. I feel we can do more to transform the thinking,” says Neelam.

Starting with sales and marketing, Neelam also learned product marketing, how to run a business, and picked up technology as she moved up the ladder. But she always met resistance on the way.

“It was an issue in the ‘80s. Everyone would ask, ‘how can a woman tell us what we can do with computers?’ It is worse when you are younger. One of the things I started doing was changing what I wore. I started wearing sarees because I thought when I wore a saree, people would think I was much more senior than what I was and wouldn’t doubt me. People don’t expect you to know tech and the hard aspects of business because you are a woman, and they keep doubting you,” Neelam says.

However, Neelam never stopped putting her hand up for newer roles.

“If there is one thing I learnt in life, it is put up your hand and say this is what I want to do. The worst case would be that people will say you aren’t ready for it, and you just have to ask what do I need to learn to do it,” says Neelam.

The changing world of technology

Technology gets outdated very easily. Whether it is software or other areas such as biotechnology or healthcare, you get obsolete very quickly.

“Now, ironically, once you leave college, there is no place where you can go and learn. If in your organisation you turned around and said I don't know what we are talking about in AI, most men will say, 'she doesn't know?’ Then you start getting discounted. So you can't say that you don't know. And there are no schools where you can pick it up. Hence, your self-learning is very critical — how do you pick up what you do? How do you engage with people and get the right conversations?” Neelam explains.

Technology has transformed from selling single computers to mainframes. And, it isn’t over yet; it keeps changing.

“In the 80s, we had to sell by saying, you need to buy a computer because it can help you with financial accounting better. If you went to an office and say, “I want to talk to somebody about computers,” there's no one to talk to you about it. Most people didn’t believe in computers. I quickly realised it has to be the CEO; it cannot be anyone down the line because companies are not thinking about automation at all. We would have sessions to explain what computers can do for you,” she shares.

When the PCs came, it was about bits and bytes, and things started getting more efficient with Intel. The computer moved away from a large air-conditioned data centre to people’s desks, which led to a push of ERP.

“In 2000, programmers were writing code, and when they would write when should the program end, they would put 000. In 1996, people realised that in the year 2000, all the programs will stop working as 000 was put. It was a big change. It got recognition for the industry, and the growth was phenomenal because everybody said ‘code change, let us give India to do it,’ and we emerged as a tech industry,” says Neelam.

The outsourcing of transaction processing or BPO to India was the next big milestone, which created opportunities for using technology to do businesses differently. Today, everything is driven by AI and Cloud.

Neelam says large corporations can learn how to speed up from startups. From thinking of an idea to its execution, large companies take too much time to get approvals, understanding how to invest, and so on.

“They have more money, but they take very long to make decisions. On the other hand, startups are nimble-footed — when they have an idea, they make an opportunity out of it. The speed is high. Large companies must learn that if they don't adopt the changing speed of innovation, perhaps, they will not be there in the next five or seven years,” says Neelam.

Startups, on the other hand, need to think about how they can make it big, streamline, and make it process-oriented, so the company exists for many more years.

“Everybody thinks it's okay to burn cash. Nobody thinks of ‘When will you make money?’ So, one has to start thinking as to when will you see profit in the books,” says Neelam.

For example, in the 80s, when Microsoft started with its DoS, it was a startup. If it didn't think about having a long life and creating a company, it wouldn’t have existed today.

The balancing act: What a year of the pandemic has meant for women entrepreneurs

“Focus on one or two things yourself, and have people around you who can do other things. Select what you will do, and hire people that have the strengths to do the rest. You can't do everything, or the startup would not take off as it should,” she adds.

While today, the world is a lot more forgiving as people are willing to try out different versions of the app, soon, it will not be, so focus on the quality of your service and product to the customers because once customers go away, getting them back is not easy.

Advising women entrepreneurs, Neelam says, “I believe women have the strength to run businesses very efficiently. And, we are by nature are good at multitasking; it's in our DNA. Women normally have great ideas, but they keep questioning and doubting themselves. My advice is don't doubt yourself. You know what you want to do, so just do it. Listen to opinions, definitely think things through, but do what your heart tells you to do. As women, we tend to hold back.”

Keep learning, Neelam says, adding, “We give up on it. We don't keep ourselves current, and as a result, whether it's a man or a woman, we start losing out in the industry.”