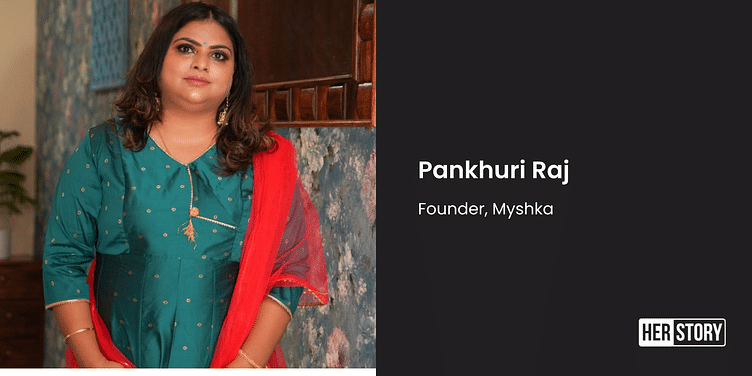 In 2016, when Pankhuri Raj’s daughter was one-and-a-half years old, she started looking at a different career option so that she could spend more time with her.

Pankhuri had put in more than 15 years in the banking sector, with stints at IndusInd Bank and HDFC Bank. There was another reason - she also wanted to start a business that would generate employment for others, especially women.

A fashion enthusiast, Pankhuri posted that small towns like Dehra Dun and Ranchi would often travel to Delhi and Kolkata to purchase clothes.

“In those days, few stylish options were available in small towns, and ecommerce had not taken off in a big way yet,” she says.

Cashing in on the ecommerce boom

In 2008, when she began shopping from ecommerce platforms, she understood the convenience and power of the medium. This also prompted her to research an ecommerce business focusing on women’s wear. The idea took root slowly but steadily.

She travelled to Delhi, Jaipur, and Surat often to meet manufacturers to source the clothes and worked out of a warehouse in Delhi. Beginning in a small way on Flipkart in 2017, her brand Myshka slowly started gaining in popularity. She also quit her job to turn to business full-time.

People around her wondered why she would leave a cushy job to become a first-generation entrepreneur. Despite the naysayers, she continued with the dream.

Pankhuri was consistent in her research. She visited malls and asked women what they wanted in terms of workwear. Designing the pieces herself, she focused on comfort and affordability and started with kurtas and tops priced around Rs 500.

“People did not trust online brands much in the beginning and always wanted cheaper options,” she recalls.

In 2019, she presented 50 news samples to Myntra and Jabong and got an immediate entry. She also expanded her operations, opening a manufacturing unit in Noida Industrial Area with a team of 10 that included tailors, patternmakers, and embroiderers, most of them women. In just four days, she received more than 3,500 orders.

Currently, she provides direct employment to 100 people and indirectly to many more.

“Most of my staff are from the villages nearby, and some of them have not even left home to work until they came to Myshka. Now, they earn an income of around 10,000-12,000 easily. They are open to all kinds of jobs – from packing, cutting thread, tailoring, etc.,” she says.

Starting with 50 products on Flipkart, the Myshka range now has over 700 SKUs for women’s wear and are available on major ecommerce sites like Amazon, Myntra, and Ajio. Recently, Pankhuri tied up with Shopper’s Stop to showcase the brand at their physical stores.

“When I left my banking job, my salary was around 90,000. Coming from a middle-class background, it’s a moment of pride to realise that I can generate jobs for others,” she adds.

When the company was completely shut for two months during the pandemic, Pankhuri did not let the staff go. Instead, she made sure she paid them enough to keep their households going.

“This ensured that they stayed back with me, and when things returned to normal, work started in full swing,” she says.

In June 2021, when the factory reopened, Pankhuri also realised that online shopping behaviour had changed. Some new customers were looking for trendy styles and quality products with the best pricing.

The Myshka range is priced between Rs 300-Rs 3,000 and includes both ethnic and fusion wear for women. They also supply to boutiques in Dubai and Malaysia. Pankhuri claims that orders are consistent – and they never go below 1,000 in a day.

In August 2021, two Myshka physical stores were also opened through a franchise model in Noida. Pankhuri also aims to have an utterly women-led stitching unit soon.

“It’s not easy being a woman entrepreneur; people don’t trust you that easily or take you seriously. But it gets better over time. I believe women are born to multi-task, and that works in our favour. I am also looking to partner with celebrities to celebrities if the opportunity arises,” Pankhuri says.