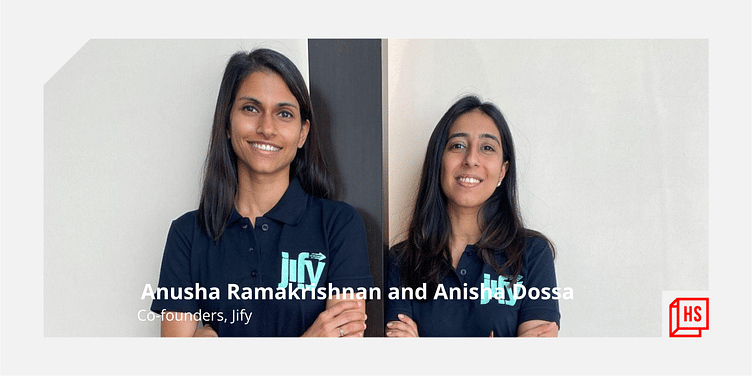 Entrepreneurs Anisha Dossa and Anusha Ramakrishnan founded Jify with the belief that access to earned income is a fundamental human right. In less than a year, the Mumbai startup claims that about 50,000 employees in India are not waiting for payday in times of emergency.

The rise of fintech startups is changing the way Indians work with money, but most innovations are focussed on enabling digital payments and transactions.

As people across India made a total of 2.8 billion digital payment transactions worth over Rs 5 trillion in June 2021, entrepreneurs Anisha Dossa and Anusha Ramakrishnan were hard at work in Mumbai with the mission to help Indians build financial resilience and wellness through their startup, ﻿Jify﻿ which was incorporated in July this year.

With most Indians living from paycheck to paycheck, the duo noted the first step to achieve financial wellness would be to ensure access to liquidity by ensuring earned wage access (EWA) without having to wait for payday.

In fact, as much as 81 percent of Indian employees have faced a financial shortfall between pay periods and nearly 72 percent have resorted to alternate finance options during emergencies and to cover unplanned expenses, according to a report titled Earned Wage Access in India: The final frontier of employee wellbeing. This resulted in mental stress and affected their performance at work as well.

Top trends that defined fintech in 2021

Anusha is a graduate from the Indian School of Business (ISB) and Anisha graduated from the London Business School. The duo brings together over two decades of experience in the financial services industry.

They noted that most people within the annual income segment of Rs 2 lakh and Rs 8 Lakh do not necessarily have the financial maturity or the guidance to save and build wealth for future financial goals.

“However, a lot of people were either losing money between paychecks either by paying over three percent interest on monthly loans or having to borrow from friends and family or loan sharks,” Anisha tells HerStory.

But before getting to savings, they saw that the bigger problem to solve was access to liquid cash. “Only when you solve access can you walk the journey with the consumers towards saving,” they say.

Mumbai-based Jify operates only on the B2B2C model and caters to about 50,000 employees.

The startup’s three key services in focus include Access, which ensures easy access to earned wages; Spend, which facilitates the user with a Jify pre-paid card for cash withdrawals, instant payments, rewards and cashbacks; Build, which will be launched as a platform to engage with users and educate them on savings, investments at micro level, and wealth creation, among others.

After a corporate company is signed on as a client, employees who become direct users can download the Jify app and get automated access to a prepaid Spend card.

Once registered on the app, users can start tracking their earnings and update KYC information if they want to withdraw any amount.

“We kept a simple, three-step KYC process that can be done in 30 seconds because that could be a point of drop-off,” Anisha shares.

A Sequoia Spark Fellow, the startup works with a banking and financing partner who disburses the funds directly to the employees and the employer company pays the lumpsum amount at the time of crediting salary.

India is fairly new to the idea of earned wage access and hence corporates with traditional human resources function have been resistant to the idea.

However, the entrepreneurs say employers have realised the importance of not only mental and physical wellness but also financial wellness during the pandemic. Most corporates have been open to partner with

Jify as they can provide support to employees at zero cost and zero risk.

Anusha says, “Financial wellness has always been a grey area for corporates, not really knowing how to address it although they realise it is a need.”

Started with their savings, Jify has raised an undisclosed amount of pre-seed funding. Tapping the Indian fintech market that is expected to grow at a CAGR of 12 percent between 2021 and 2026, the duo believes India is only warming up to the concept of earned wage access, which can comfortably accommodate at least five to seven players. Other startups operating in the similar space include Bengaluru-based ﻿Refyne﻿.

For Jify, Anisha says, simplicity is the key. “We don't want to sell 100 different products because that is where the confusion starts.”

With the goal to turn every borrower in the country into a saver, it will offer educational content to nudge its users into saving based on their financial capacity.

Amid the information overload, choosing the source for financial advice and data can be the first time entrants into grey and white collar workers.

Targeting the audience that may not have the appetite to trade stocks and make major investments, Anisha says, “Employees are more likely to trust a platform associated with their employer as was the case for most Indians buying insurance and we will keep the content simple and bite sized to achieve micro-savings goals and reward them for good financial behaviour.”

Their entrepreneurial journey has not been on gender stereotypes and faced questions related to marital status or whether they have children.

"Having said that, the fintech community so far has been extremely welcoming and has given our work experiences and backgrounds their due respect. We would tell women entrepreneurs to not get discouraged or disheartened by stereotypes, ultimately its the idea and execution which matters," Anusha advises.