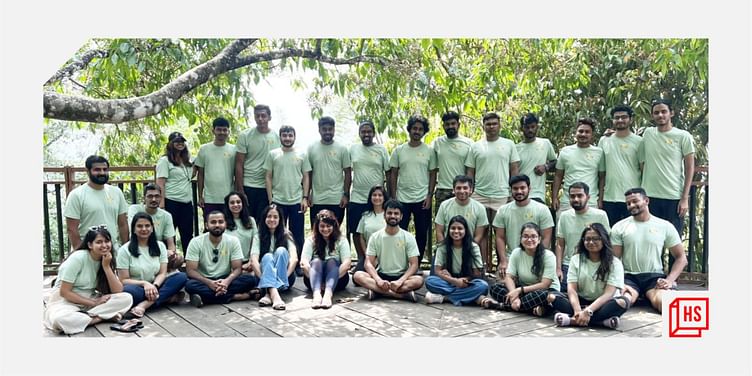 Does a street food vendor or a candymaker at the corner of a street earn enough to sustain themselves? What if they are looking to sell their products online but have no idea how to go about it?

These thoughts crossed Kausambi Manjita’s mind before she decided to democratise the retail ecosystem of India.

With the help of her former colleague from ﻿Myntra﻿, Barada Sahu, Kausambi established ﻿Mason﻿ — a no-code automated platform that helps retailers run their businesses online in auto-pilot mode — in 2020.

Struck by an epiphany

Born in Guwahati, Assam, Kausambi’s family kept moving around the country when she was a kid. At the time, she had multiple interactions with small retailers who played a major role in developing her interest in the sector.

After graduating from ISB, Hyderabad, Kausambi worked with Paytm and Myntra, where she had an epiphany one day.

“I realised I was helping in the growth of the big one percent of retailers. But what about the other 99 percent who need the same technology to start a business online?” Kausambi says.

The Ghee Roast Girl: how this chef is putting Mangalurean cuisine on the culinary map

Mason began by onboarding 100 retailers on its platform. It took the Ontario, Canada-headquartered startup, with an office in Bengaluru, six months to expand its userbase to 1,000 retailers.

While the retail automation market size is projected to reach $23.58 billion by 2026 — growing at a CAGR of 9.6 percent from 2019 to 2026 — small retailers find themselves competing with giants, including Amazon and Flipkart, who have deep pockets to run automated stores.

Kausambi feels most technology solutions — ﻿Shopify﻿, ﻿WooCommerce﻿, ﻿SAP﻿— are tailored only for large enterprises or are targeted at fragmented use-cases.

And in the face of fierce competition, small retailers are left with only one option —to merge with bigger companies. But with Mason, Kausambi wanted to democratise the retail space.

“One of the most common requests we received from retailers was they wanted their business to be automated to compete with the bigger players. These are small teams that cannot operate everything all the time. So, we evolved as a product by paying attention to the changes and demands of the market,” she says.

In the beginning, self-doubt was one of the biggest hurdles for Kausambi. Despite working on an automation product and employing a team of tech graduates, she wondered if she was making enough impact without a BTech background.

“As a woman, growing up in a small town in India, some things hold you back. I used to ask myself, “Will I, a non-techie, be able to provide any valuable inputs?” she tells HerStory.

She also faced the inherent bias against women co-founders — They are successful only if their co-founders are either their husbands or some male family member.

“When I used to meet companies for collaborations and investments, I often had to clarify that Barada and I are not related. The thought that a woman can only succeed as an entrepreneur if their husbands are their co-founders is a bias every female entrepreneur has to face at some point,” says Kausambi, co-founder of Mason.

However, Kausambi draws inspiration from individuals like Falguni Nayyar, who began her entrepreneurial journey much later in her life and built a billion-dollar business like Nykaa.

The conversation about gender identity

Bringing gender identity — which began with a message on the communication channel Slack — has played a pivotal role in the growth of Mason’s team, Kausambi says.

“Last year, we had an employee who wrote “Hey guys…” in a Slack channel. One of the women engineers pointed out, “Hey, there are girls in the team.” It made us realise how often we use terms like ‘guys’ to denote both men and women,” she says.

She continues, “We began a conversation about using gender-neutral terms like ‘folks’ instead of ‘guys’, which morphed into another conversation, where one of our employees pointed out she preferred to be addressed as ‘they/their’. We were surprised how it never occurred to us how a person wanted to be spoken to.”

Soon, Mason made it necessary to ask collaborators, team members, and clients to specify their pronouns and how they wanted to be addressed. And this active step helps the startup’s team respect individuals and their gender identities.

“We have almost 50:50 male to female workforce ratio. Unfortunately, there is still a dearth of women in the tech department because we don’t get too many profiles of women from STEM. But, we are trying our best to improve the ratio,” says Kausambi.

Women in tech: Why it’s time for companies to try a new gender-equality playbook

Aiming to grow its number of women leaders to at least 50 percent of the total team strength, Mason wants to hire more women to join it across product, sales, and marketing functions for its North America team.

The automated retail platform space is dominated by companies such as Shopify, Dukaan, Bolt, and Shopgate. Swiggy, too, recently explored the space by collaborating with small street food vendors under the PMSVANidhi scheme.

However, Mason stands out as it provides no-code automation at the retailers’ fingertips. By 2022-end, Mason aims to power 100,000 global stores.

“We want to help teams become independent without having to focus too much on operating numerous applications to run an online store. We help you put that store on autopilot,’ says Kausambi.

In 2021, Mason started offering a freemium subscription to its clients, where they can join for free, and based on their usage, pay a small subscription fee.

Today, it hosts around 50,000 retail stores on its website, of which 1,200 of them are paid subscribers. Some of these brands include Skechers, Him.Her., Eme-te, Smith & Jones, and more.

Over the past 10 months, Kausambi says, the startup is witnessing a monthly growth of 20 percent. In fact, Mason is rated a high score of 4.9 by over 480 customers on Shopify.

10 moments of culture shock for an Indian in Germany