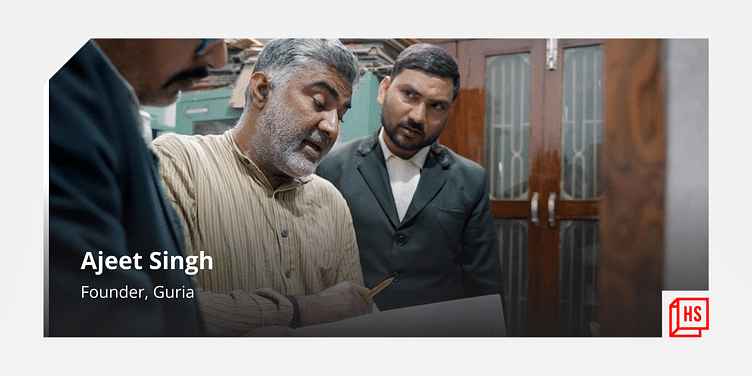 In 1988, when Ajeet Singh was just 17 years old, he attended a relative’s wedding where he saw a woman dancing. He later came to know she was a sex worker. Moved by the plight of the family, he adopted the woman’s three children, ending the next generation taking to prostitution. The children stayed with him for a few years, but later returned to their mother.

But Ajeet didn’t lose hope. He had by then, started working in the red-light area of Varanasi to understand the problems of sex workers.

This laid the foundation for ﻿Guria India﻿, a non-profit organisation that is dedicated to fighting child prostitution, second-generation prostitution, and sex trafficking in North India.

“I was exposed to incidences of girls/women in commercial sex and was aware of their exploitation by pimps and brothel keepers. The first experience of rescue came in 1999 from rescuing three children and victims of sexual abuse from Banda, Uttar Pradesh, where the father of the victims was the culprit himself,” Ajeet tells HerStory.

After this, the first big rescue came in 2005 in the Varanasi red-light area when Ajeet realised that only education/charity work was not enough to prevent sex-trafficking and child prostitution, and that he must take the structural roots of prostitution head-on. This first rescue was successful in freeing forty-nine women and girls, including minors, from different brothels in the red-light area of Varanasi.

“Guria continued to pursue this case and got seven prominent brothel-keepers convicted till 2016 and trial of remaining accused is still pending after 17 years. This head-on collision with the criminal nexus along with the continuing education/compassionate services being provided in the Varanasi red-light area as part of our holistic end-to-end strategy made it the first child-prostitution free red-light area in India,” says Ajeet.

Ramala, a Nepali woman from the Varanasi red-light area, is one of the women rescued from trafficking. She says, “Sirji has continuously been fighting for us and now we are much safer from the tyranny of the police, pimps, traffickers, brothel-keepers, criminals, and others. We were brought as small girls in this hell, but thankfully now there are no younger girls in the flesh trade”.

Rescue and rehabilitation in India is a complex process, admits Ajeet.

“Initially, the police mostly deny the crime, delay rescue and avoid registering the complaints. Many times, for rescue, we have to approach the higher authorities or file applications in court or apply pressure through public support. Also, especially for rescue in brothels, we have to conduct recce operations and collect spy camera evidence of minor girls being present in brothels.”

After being rescued, the victim is enrolled temporarily in a shelter home and her medical statement is taken before a magistrate. Ultimately, the child is handed over to her family or enrolled in a shelter home based on the availability of guardians and the consent of the child.

“However, we do not stop at this juncture of restoration and further provide the victim with free legal aid, witness protection, and livelihood support to ensure that the victim gets justice, and a precedent is set. To successfully win the case, we must also oppose bails of traffickers from the District Court to the High Court and Supreme Court, oppose fake custody, conduct mock trials, get brothels seized, put ourselves forward as witness, challenge fake protection orders/acquittals, fight cross-cases against victims or Guria, face threats and attacks, etc,” he adds.

Sometimes, upon the directions of the state, Guria even conducts home verification and counselling of the rescued survivors restored in the government shelter homes.

According to a study by Guria, about 94 percent of the missing children belong to lower castes/minority groups, and 53 percent of the families of these missing children had monthly income less than Rs 2,000. They come from the marginalised and vulnerable rural backgrounds with generally hand-to-mouth conditions, and their trafficking is fuelled by their economic and social impoverishment.

The girls are trapped through abduction, threat, or use of force, coercion, fraud, deception, abuse of power, etc. Uttar Pradesh has one of the highest rates of outward migration, which gets subtly converted into sex trafficking, and therefore the state is a source/transit/destination state for human trafficking.

Till date, Guria has rescued and rehabilitated 5,185 persons from slavery, including commercial sexual exploitation in brothels and bonded labour.

Guria faces a number of challenges during pre-rescue, rescue, and rehabilitation.

In spite of the provisions in the law, guidelines, and directions of the Supreme Court, Neha, Education Centre Coordinator, Guria, points out that the police refuses to file the complaints in cases related to rape and sex trafficking, and hence the complainant is forced to get a complaint filed through court orders – but the erring police officers go scot-free.

Also, despite the information given by victim/Guria/victims’ parents about confinement of other minor girls in brothels, authorities responsible for the rescue of such victims neglect the recovery of the same and are abusive or aggressive.

Almost negligible action was taken by the police in the matter of attack on human rights defenders. There are 24 reported attacks on the Guria India team, especially on Ajeet. These are just a few among many other challenges during rescue and rehabilitation.

Despite these, Guria has been involved/nominated in important government committees, including member of the Central Nodal Agency to combat trafficking – Government of India; the State Advisory Board, Government of Uttar Pradesh, on effective implementation, evaluation, and advice on the Juvenile Justice (Care and Protection of Children) Act, 2000 and Protection of Children from Sexual Offences Act, 2012; the inter-ministerial committee, Government of India, for preparing comprehensive legislation on various aspects of human trafficking, and others.

She also calls attention to the fact that Guria still struggles with the authorities/police at the ground during implementation due to the widespread corruption and impunity.

Neha explains that most of the girls have gone back to their families despite the social stigma that arises during rehabilitation and reintegration.

“The girls are happier since they have been rescued from slavery. Wherever possible, looking at the condition of the family, we have also provided livelihood support, which has supported the victim families existing business (goatery, animal husbandry, poultry, tea shop, general store, egg, and vegetable vendor) or helped them to set up small new businesses or take up government/private jobs/self-employed (army, navy, government teacher, custom officer, lawyer, manager, social worker, florist, train ticket examiner, accountant) and vocational training and we have also helped the victim family to apply for government compensation,” she says.

Karni, who received livelihood and witness protection support from Guria, says, “It is now safe with shifting of my residence and fortifying my doors and windows. I am no more scared and I will certainly fight in the court for all that I have suffered and my parents were beaten.”

The sustained efforts of Guria has resulted in many interventions and changes. A few of them include - India’s first sustainable child prostitution free area in red light area at Varanasi – ratified by International Mother Teresa Award for Social Justice in 2019.

It has also created India’s first ever cultural group of 30 women in prostitution who perform traditional music and dance as a means of awareness and dignity, including income generation for the performers. They have performed in prestigious venues across India including World Social Forum

Guria, in collaboration with GiveIndia, is currently raising funds to free women and children from the sex trade.

“While most of the support by GiveIndia till now has been towards legal work and nutrition of the children of the red-light area education centre, Give India has also helped us with ration distribution, education in villages, and livelihood support. Overall, we are happy that this form of crowdfunding efforts would extend our reach in the community and foster sustainability, which would maintain Guria’s stand to raise difficult questions to the state, which is responsible for prevention of sex trafficking and child prostitution,” says Ajeet.

Talking about the fundraiser, Priyanka Prakash, Director, Head - Online Giving & Marketing, GiveIndia, says, “GiveIndia stands for the rights of the vulnerable, and we are glad to join Guria in its noble cause. GiveIndia's fundraiser is an effort to increase Guria's capacity to work with greater vigour. We can all do our bit by donating generously to the fundraiser.”

“The only benchmark that we follow and which needs to percolate down is “lives must change”,” he says.