From a fan to a friend! 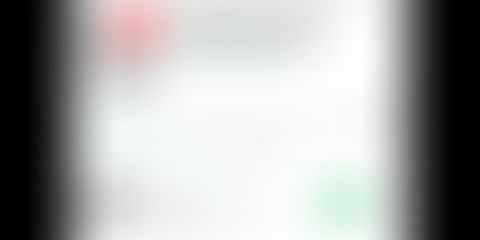 A Yuvraj Singh fan who did possibly everything to meet him which resulted in a job and ended up becoming a friend to visiting his house quite often.

Everyone knows about my craziness for Yuvraj Singh.

But do you know the story behind how I became his fan? How I met him? How am I so close to him?

It all started way back in 2005 when entire country saw the mighty big sixes of MS Dhoni against Pakistan but I became a fan of Yuvraj Singh because of his splendid performance by delivering 3 tons in 5 ODI's and was awarded as Man of the series.

This continued for next two series as well against England & South Africa and he made a record by taking a hat-trick of Man of the series awards.

A day every Indian remembers.

Yes, I am talking about Yuvraj Singh taking Stuart Broad on fire and hitting six sixes in an over.

I still remember I had a Maths exam next day, being so poor in Maths I didn't study anything and slept around 9'o clock. I again woke up at 10:30 to drink water, by the time everyone had slept. I thought of checking the score of the ongoing match between India and England. I switched on the TV and thought I will see just one over and then go back to sleep.

And!! That one over I decided to watch was the one of Stuart Broad.

My craziness for Yuvi was growing by every passing match and I was turning a big fan of elegant off-drives and mighty sixes.

Seeing every day on news channels what Yuvraj Singh has tweeted or what other celebrities have tweeted made me create an account on Twitter.

I joined Twitter on 3rd of December, 2010 and just 4 hours later I had my first follower.

The person for whom I joined Twitter known as @yuvsingh09 those days Yuvraj Singh was my 1st follower on twitter. I just sent him a simple tweet saying: "I don't have any followers yet how awesome will it be if you are my 1st follower"

Getting a follow back from your idol is the biggest thing that can happen on Twitter. Yuvi later started to know me and we used to have conversations. I always updated him with the timings of Manchester United matches and I was amongst the stand out Yuvraj Singh fans on social media. Here are a few replies he has done to me till date. 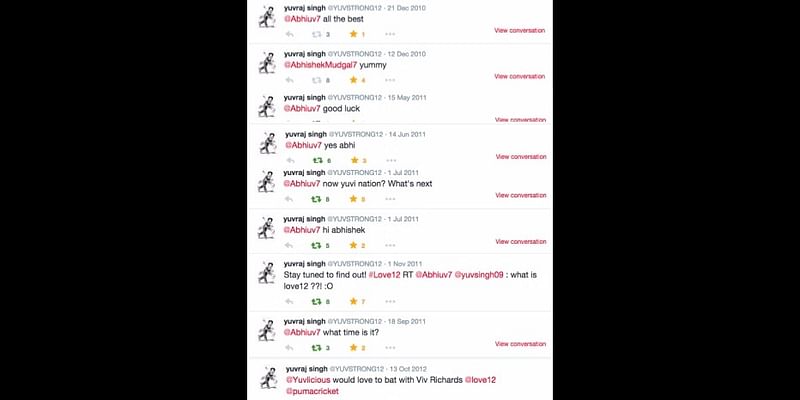 I always tried to sneak a chance to meet him, while trying I came across few of his friends who were his neighbors, close friends & his manager. I used to have casual talks with them on Facebook & Twitter. I decided to create a fan club for him by the name @Yuvination where all fans can connect with each other. Yuvi noticed that as well and followed it!

Winning World Cup for India & Sachin can be marked as the best thing in Yuvi's life but good things have to end one day and he was diagnosed with Cancer and went to the USA for his treatment Meanwhile in India me and few other friends used to show the support and love towards him to keep him motivated through our fan clubs. When he successfully defeated cancer and boarded his flight back home, I came to know when he will be touching down in Delhi through one of his friends and decided to go to the Airport! I met all of his friends who were there to receive him. That was the first time I saw Yuvraj Singh in real. I gave 15-16 interviews to Media showing my support and I was captured by the biggest Photo website Getty Images. 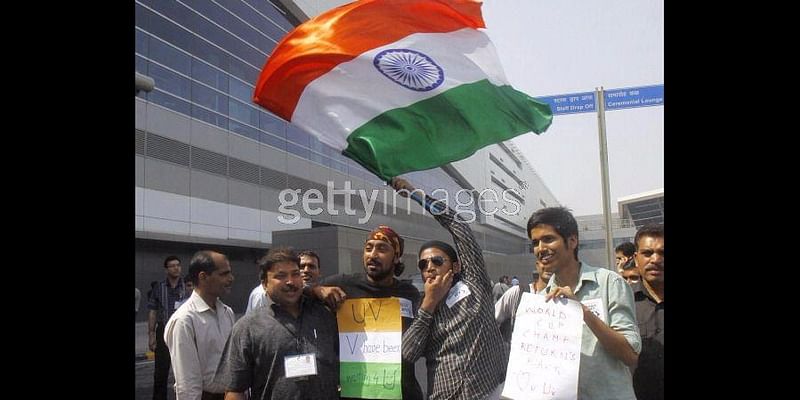 Meeting his friends completely changed my life and one of them later suggested my name for a sports company. I managed sports icons like Unmukt Chand, Mithali Raj, Manan Vohra and few others. It didn't work out and I left the company after 3 months.

Meanwhile, I kept trying to meet Yuvi and one of my friend (Devanshi Madhiyar) told me about a Twitter contest. The winners of the contest would get a chance to meet Yuvraj Singh. I won it and was on top of the world to meet in person with my hero.

A freezing and rainy day in Delhi and I was suffering from fever but that was not enough to stop me from meeting Yuvraj Singh. The event was supposed to happen at Crowne Plaza in Gurgaon which was about 40kms away from my place. My mom didn't want me to go in that rainy weather but I still went. Yuvraj Singh was there for a launch of a new brand (GoodChime) which was getting collaborated with his cricket academy. Before Yuvraj came to the venue I met Aneesh Gautam (Yuvi's friend) We had a friendly conversation. Yuvraj entered the hall and all the winners of the contest were awarded a personally signed mug. Later Yuvraj got busy giving interviews.

Aneesh asked me : "Do you have a picture with Yuvi?"

He introduced me to Yuvi saying "He's Abhishek" I shook hand with Yuvi and told myself that I manage @Yuvination. 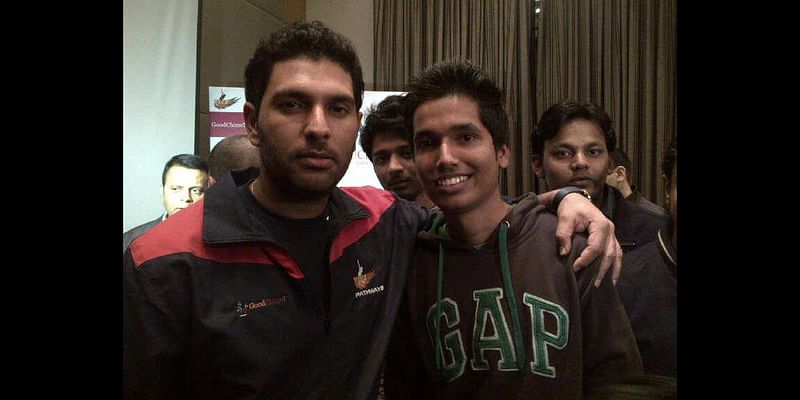 I again met him in Roshanara cricket club in Dec'13. He was there to practice with Punjab Ranji team, I stood on the boundary line and waited for him to finish off practice. He along with Bhajji were coming towards the boundary line I went to Yuvi and asked If he remembers me? He replied: "Oye, Yuvination tu yahan bhi aagaya" and He left me speechless again, then I asked him for a picture and few autographs.

From seeing him at the airport to visiting his house last month, I have traveled a long from where I started my journey. And surely that's not the end of my fairy tale fan story there's a lot to watch out for! 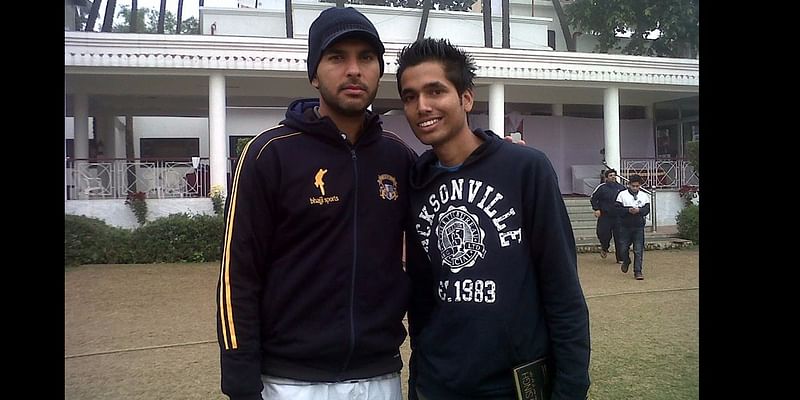 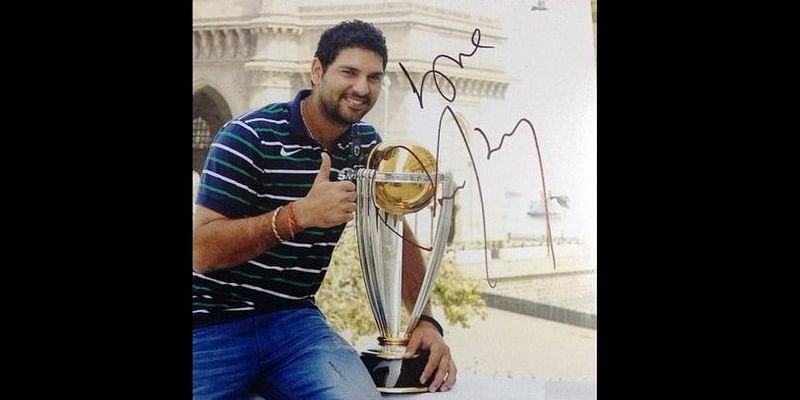 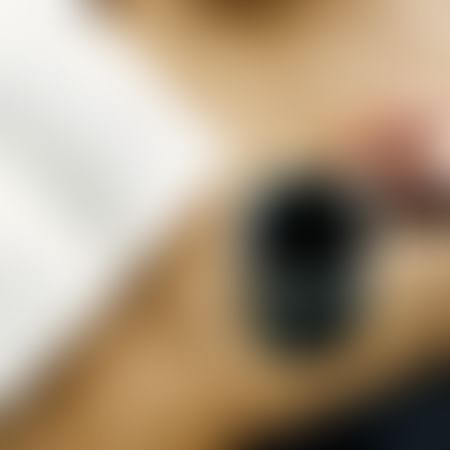