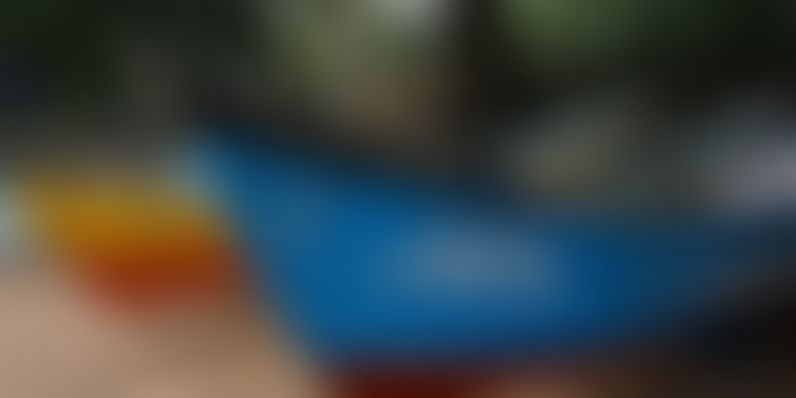 Getting to Gokarna involved a journey full of sensory changes. I said bye to the rainy, green, and cold Heggodu to enter the dry, beachy, warm climate of the coastal area of Gokarna.

The trip was long. A distance of 152 km separated the cities of Heggodu and Gokarna, with bus changes in Honavar and Kumpta.

The route from Heggodu to Honavar went through the middle of the mountains, with virgin forest, waterfalls, and many curves on the road. Green and rain were my faithful traveling companions.

At one point on the trip, the bus stopped behind a long line of vehicles. Something had happened farther up the road.

Passengers began to get off the bus and walk towards the obstacle that prevented vehicles from advancing: a large branch had fallen across the road. In a remarkable display of teamwork, a group of people joined forces in an attempt to move it, but it was not enough. Then appeared a man with a chainsaw. Wow, he was well equipped! He provided the solution for all of us on both lanes of the street.

Little by little my coat began to bother me; the umbrella under my seat became unnecessary, and the high temperature of the coast indicated that I had arrived in Gokarna.

I got there at night. The cool breeze brushed my face, and from my room in Zostel I could hear the sound of waves hitting the shore.

I stayed in a mixed dormitory where I met Krisha and Yash, an engaged couple who told me about their struggle to defend their relationship from the religious pressure of their parents, owing to the fact that she was Hindu and her fiancé, Muslim. They had met in college and now, as engineers, had decided to go on vacation to Gokarna and Goa.

The next day I had breakfast with them, and as I had to check out that morning, they told me about their plans and gave me many suggestions of places I could visit in the area. 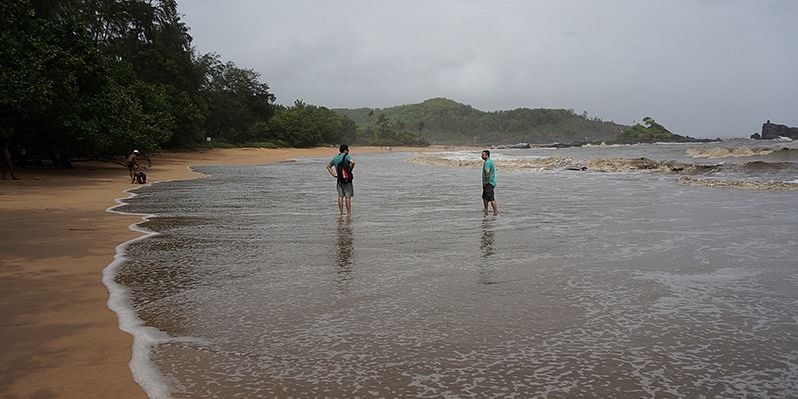 AAO Hostels, along with my new friends, highlighted the beauty of Om Beach, so I wanted to go there to contemplate what the locals had told me about with such affection. At a simpler level, I also just wanted to walk on the sand and put my feet in the waters of the Arabian Sea.

Everything seemed so cozy and quiet. I watched a family play together in the sand; it reminded me of the many times in my childhood that I built sand castles over and over again.

It is interesting that, regardless of our origins, the sea always leads us to create temporary works of art. It always generates good vibes. 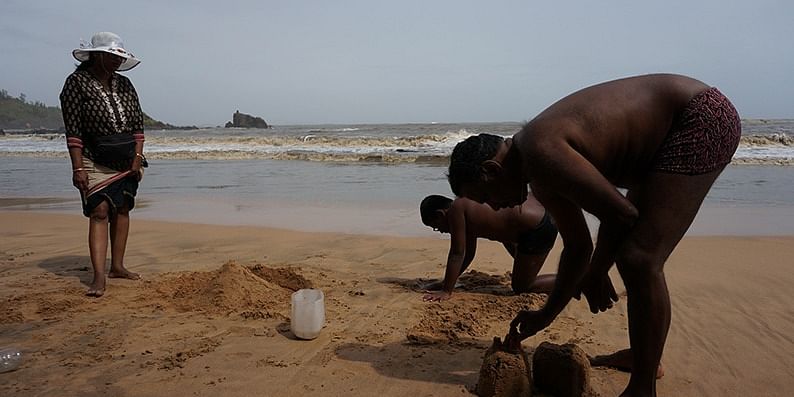 Gokarna beach was different from other beaches I’d been to in that it was closer to the public street and there were cows. That entertained me a lot; it is not usual to contemplate cows on the beach.

And, like me, there were other people walking on the seashore watching the sunset.

It was getting late, and I had to be at the train station at 5:00 p.m. for my trip to Goa. Krisha and Yash had offered to let me stay with them, as they were also going to Goa.

The train station was simple, but still allowed me to see scenes full of everyday life in Gokarna. While waiting for the train to arrive, my eyes watched special moments unfold.

I traveled in a window seat, where I had a view of the beach in the distance. I crossed wide rivers, saw many rice plantations, and many villages full of beautiful people.

Saying bye to Gokarna between the isolated train routes and in the company of my new friends filled my journey with light.