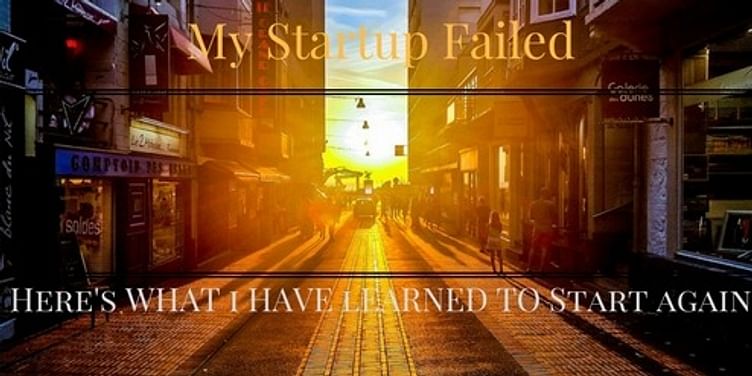 Startup is easy to start, but difficult to manage.  It needs patience & efforts to making  your business successful.

I always had an interest in running my own business. I grew up and started up my little work which did not go in an expected way. 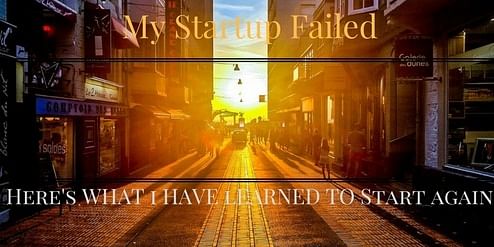 Facing a business failure is probably the worst part of your life. It brings you a massive amount of financial and emotional stress besides losing respect in the market. Despite the positive response from various people, the business did not perpetuate due to various reasons. I admit that I was at fault many times. Being an inexperienced and unseasoned professional, failure did not give me a setback. Instead, it instilled a hope within me to stand again and to fight back.

Although it was quite strenuous for me to restart everything from the beginning, but the positivity in me kept everything alive. I pacified myself saying that “failures are a part of life, and that’s how an entrepreneur grows, Right?”

Here are my personal experiences that I’d like to share with you people if you are a beginner or suffering from a recent startup failure:

Get into the root of the entire problem. Analyze the past in a very critical way. Figure out what made it happen. Do not just sugarcoat everything and blame it upon the destiny. Ask yourself the following few questions:

• Was the marketing strategy correct?

• Did I possibility convey the message?

• Did I commit flaws?

• What made the people reluctant to participate in my business?

• Did I have some feedback from the customers?

• Did I initiate ample research?

Just answer these questions to yourself and things could be different than what you imagine it to be. Take a pen and paper and respond in a more descriptive way so that things can clearly come out. Sometimes, writing brings up more angles about a problematic situation.

Just like everyone, I also estimated the current expenses and managed to arrange the finances for it. Also, I allotted quite a hefty amount for the unforeseen expenses. However, that was not enough. There was a need to walk an extra mile. The marketing attempts should have been more precise and clear-cut. Furthermore, there was a need for more consolidated network chain.

• The messaging was unclear: the message communicated to the audiences was not understood by a maximum of the people. Such a situation gave birth to a dilemma and apprehension in buying the product. The business startups establish itself online for a better approach. The web marketing gives a global coverage to the business owners. I recently launched a website that is doing quite well. And, I suggest the same to other business owners as well.

• Launching the product at one shot: now, that’s what most of the business owners do, right? Of course, the bulk production has been done to sell commodities in the market. But, then you have to know that whether the generated product matches with the choices of the general public or not. Go for “test marketing” concept. Launch the product in a particular part of the country which is accessible by you. Grab the reviews about the people before initiating a full-scale marketing strategy.

• Market survey: You are developing a product because you know that it is lucrative. But, how does that ensure success? Are you sure people are going to like the product, and they are in need of it? Make sure that the product is the need of the hour. You cannot randomly launch something and expect high profile sales to take place. Initiate Delphi technique, sale force technique and other ways of market research to know what people actually desire.

Just focus on these three questions:

• For who to produce

The failure of a product does not mean that it is not needed by people at all. Maybe it needs remodeling or some amendments to captivate people. For instance; a car company launched a plain white colored hatchback for the audiences. The model was a complete failure. However, the same model was re-launched in different colors which resulted in its hardcore success. So, the main point that needs to be conveyed here is that the product must not be discarded if it failed once. Try to eliminate the drawbacks it had, and remarket it in an entirely new way.

Set up measurable and realistic goals

So, you decided to hike up the sales revenue like one of the leading market competitors. Do you think it was worthwhile? Success does not come overnight. It takes the time to have that exponential growth and reach the success pinnacle. Give it some time and set up some easy goals for the first few years. Aim at simply covering up your expenses instead of making massive profits put off your startup.

• Without petty goals, you will never be able to analyze your success rate. You will keep on counting the failures.

Ii knows that restarting a business is a freaky tough task. The incremental success and that long-term goal appear just like a long forgotten dream. However, that’s must not keep you back from taking the initiative again. Outline the problems and take up smaller goals.

Ensure that you are offering what they want

This has been mentioned above, but let’s talks a little more about it.

Try to assess the problems that are faced by people and offer them something they really want. Talk to people you meet and start conversations through the email subscriptions. Focus on what the readers have to say and value their response. Just behave as if you are primarily working to serve them instead of making money- not to mention, you will make money if they feel impressed.

The more you talk with people, the more deeply you'll get to know what they want. So it’s pretty simple uh? So get restarted today!