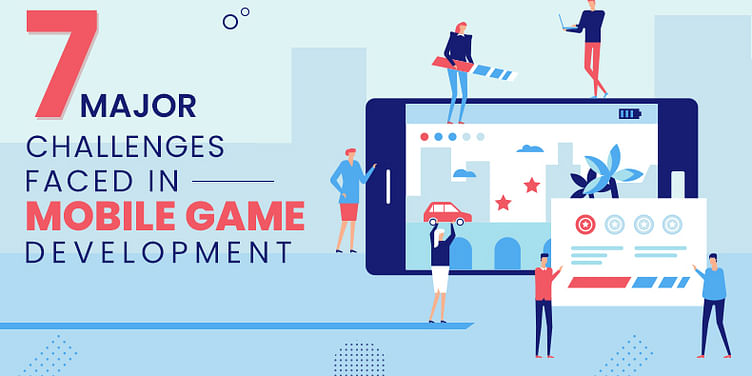 Building a gaming app is one of the most profitable ventures in 2019 and the years beyond. If we consider the statistics presented by Flurry, users spend 86% of their phone time on apps out of which 32% of the app time is spent on game apps only.

With the availabilities of advance technologies like Artificial Intelligence, AR and VR, the expectations of app owners seem to increase. This increases the existing challenges in front of mobile game developers. We need to understand that the game development process is a difficult one and consists of many challenges that occur from time to time.

Being one of the best mobile app development company in UK, we present you with the top challenges that emerge in the mobile game development process.

It is often seen that developers start off with an idea in mind that is the crux of the actual game. But most of the times, they end up making a complicated game that does not truly fulfill its motive. In such a scenario, it is preferable to adopt an iterative approach where you built the core functionalities first and move as you go. Moreover, beta release can help you get the right feedback.

As a game developer, it is difficult to do the research and analysis task but without it you might end up making a game that does not have enough users. For instance, if you want to build an action game, you need to make storylines, research the age group behavior of that particular country you are planning to launch your game in. For this, you can use online surveys like Survey Monkey or Google trends as well.

3. Getting the Game Noticed

As a top mobile app development company in UK, we understand that getting the game noticed is one of the most difficult tasks that developers face. In fact, good games sometimes do not get noticed while the bad ones collect the higher number of downloads.

It all boils down to who has implemented the right marketing strategies. For this you can follow these tips:

• Make the app free, at least for the initial few months

• Launch it on third-party app stores like Amazon, GetJar as well

• Get it listed on bigger portals or blogs

• React out to influencers on various social media platforms

There are a lot of operating systems that are coming up every now and then. Moreover, all of them have their own set of rules and SDK. So does it mean that you need to design the game as per these operating systems separately?

With cross-platform tools like Unity, MOSync and PhoneGap, it is easy to streamline the code and make it available to be used for other Operating systems.

Most of the apps that are built require users to provide their information from time to time. Thus ensuring the security of that information and data is the responsibility of the mobile app development company. For this, encrypted methods can greatly help in making sure if any unauthorized access is taking place or not. Thus it will ensure the security of users’ information in case the device is lost or damaged.

There are a lot of marketing practices that could be employed. Often game developers find it difficult to decide the best model for their app. These revenue generation techniques are the best-suited ones for gaming apps.

Based on your targeted audience, and game type, the monetization model could be framed. Many top mobile app development companies consider in-app purchase and CPI models to be the best one’s for iOS platform while advertisements remain to be the best-earning source for android apps.

The gaming application that you built needs periodic maintenance activities whether it is bug fixing, or launching new upgrades or improving its load time. Moreover, an app requires time and money to launch these new and improved versions.

Thus an ideal solution to it would be to take the help of a mobile app development agency. It will save your time and money and prevent you from the time to time problems.

Game development is a daunting task and requires a lot of time, money and patience. The support of a reliable app development team whether it is for marketing purpose of bug fixing purpose can greatly improve your stagnant gaming app.

Looking to hire unity 3D game developers for your game idea? Let Fluper know about it and we will help you in the best possible way.

Things to consider when buying a water pump