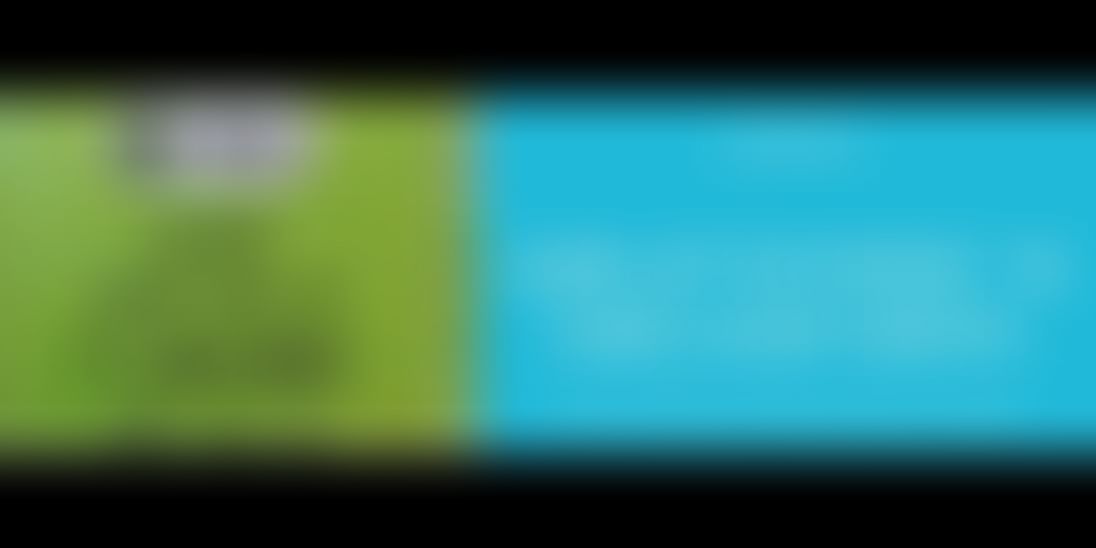 What is that one thing which influenced or influencing many people to invest their hard-earned money and become an Ola or Uber partner, and sign-up to drive for 18hrs/day in a traffic-choked city like Bangalore? It is due to the clever marketing campaigns that taxi aggregators adopt. Below is the snapshot of the real advertising campaign done by Ola & Uber. 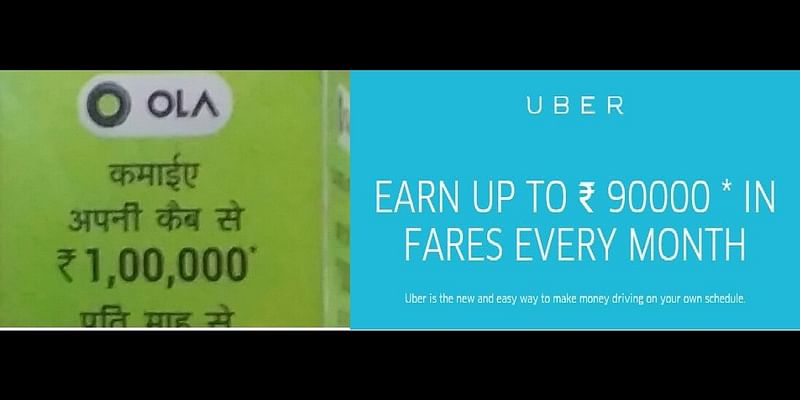 Uber even goes to the extent of saying in their SMS messages that one can make up to ₹7000/day by becoming Uber partner. This is direct marketing giving clear specifics. Earn up to ₹100000 p.m! What else anyone wants? For someone who struggles to make ₹10000 to ₹15000 every month in the factory or driving for the call center,delivery boy, owners who want to buy and rent the car, the  chance to "Earn up to ₹100000" or cliche ads like "Be your own Boss", "Set your own Hours" is too much luring.

But the reality is, is it misleading! Marketing is directed such that every driver who joins the aggregator can earn up to ₹100000, and fine prints are missing. A taxi owner thinks with simple logic that Uber promises ₹7000/day. If not every day at least if I make 50% time, I will earn ₹100000. This what leads to greater fool theory where every driver thinks same and odds of making incentives continue to drop.

Now, we can say, Ola, Uber is not forcing anyone to join. But, repeated advertising of these numbers is so luring, that many people fall prey. Now the other challenge, not many drivers want to analyze what the investment needed in terms of money, time & effort they have to put, what will be the free cash generated at the end of the month even if they end up earning ₹100000 per month.

This kind of marketing is not specific to India. Recently Uber was fined 20 million USD for misleading drivers income.

During my rides in both Ola, Uber, I have asked countless drivers if they know clearly their monthly profit? How much they take home consistently. What are your real per/km income and per/km expense? Everyone is made to believe that a simple equation like spend ₹700 on diesel and make ₹3000 incentive per day. Calculation, as shown below, illustrates, a driver if at all happen to earn ₹100000/month by driving for up to 225KM/day and working for 30 days/month. He will take the home maximum of ₹25,000.

Remaining ₹75,000 goes out for the commission, fixed expense and vehicle maintenance. Now, with billing rates of just ₹8/km, the driver is not making money on direct customer billing but rely on incentives. This is highly variable and in the control of aggregators ever changing flip-flop policies. Frustration comes from the fact that driver is serving customers but at rates far below his expense. He is at mercy of aggregators to give incentives. Whenever he doesn't get incentives, he loses money. Drivers have told, just because they missed making 1 trip, they ended up losing up to ₹800Rs. On that day he served customers losing his own money!

Driver take home based on his earnings

Now, instead of misleading drivers by marketing as earn up to ₹100000 p.m., what if Ola, Uber market campaign like any company who wants hire temp workers? 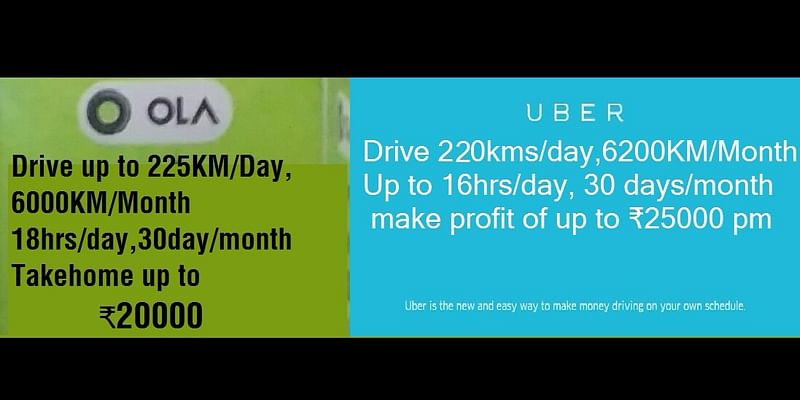 What if Ola, Uber starts advertising like others do?

Though numbers are real, will such an advertisement, lure someone to invest their money in a new car and drive for the taxi aggregators? To drive this point, I had a casual talk with one of the Ola driver during my recent ride. The driver name is Ramesh (married with 2 kids) and just 6 months back he had joined Ola buying a Swift Dzire2 car. The conversation went something as below (translated from Kannada),

What was your earlier job?

Ramesh: I was working in the factory in a factory in Peenya (Bangalore) for last 9 years

How much were you earning there?

Ok, how many hours you were working?

So, how much you think you can make in Ola?

Ramesh: Not sure, it is not very regular. I am working hard to make more.

Any idea, how many hours you are working and how many kilometers you drive?

You think this job is easier

Ramesh: No sir, this is very tough. I go home only to sleep and don’t have time to spend time with family.

What made you join Ola?

Ramesh: Saw Ola advertising that up to ₹100000 you can make. Even Uber is telling ₹7000/day. Also, talked to few friends and joined.

Ramesh: Not clear sir! It is difficult as I just track my diesel expense and daily incentives.

What if I said, you can take home only maximum ₹25K even if you are able to earn ₹100000 per month? I showed him how I calculate the income after all expenses. Also, he understood, if his earning goes down, his profit will take a maximum hit as vehicle expenses are fixed.

Then asked him, if Ola had told you, you must buy the new car on loan, drive for 18 hours/day, 30 days/month, drive up to 225km/day in Bangalore traffic and finally you can take home up to ₹25000, would you be joining?

Ramesh: Oh, right! Sir, I never thought that way. Everyone said we can make ₹100000/month but no one said, how many hours we have to drive and how much expenses we have to incur !!

Ok, I said that is what is marketing!!

The taxi aggregators have brought in the technology to make a positive difference to commuting for the taxi user, but some of the methods used by them to lure individuals to join them are questionable & cause distress in the long run. As customer’s, everyone should ask themselves, how safe is it to sit behind the wheels of drivers who hasn't slept for 16 hours and only worried about the incentives and last thing in his mind is giving good service to customers? Would you be willing to take a cab if you knew the driver is frustrated, on road for almost 20 hours? Raising awareness of the ground reality among the taxi owners/drivers & the end users is the need of the hour!