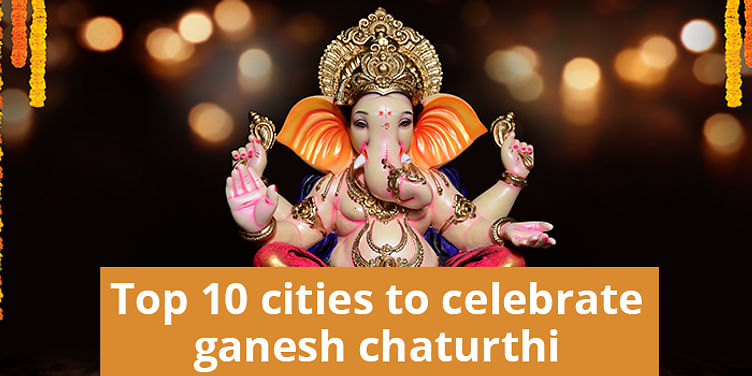 Ganesha Chaturthi is celebrated in many cities across India, but here are the top 10 cities for the best Ganesh Chaturthi celebrations

Ganesh Chaturthi is a hugely popular Hindu festival celebrated to honor Ganesha, the elephant-headed deity, who is the offspring of Shiva and Parvati. It is celebrated in the Hindu month Bhadrapada (August -September). The festival is a 10-day extravaganza and comes to a close on the fourteenth day of Anant Chaturdashi.

Ganesh Chaturthi is celebrated all over India with great fervor. Lord Ganesha is one of the most loved and popular deities of the Hindu pantheon. Moreover, he has the power to remove obstacles, bless new ventures with success, and remove sins. Hence, he has large numbers of devotees. People celebrate the festival at home as well as in public places, where huge pandals are erected on which decorated Ganesha idols, made of clay, are installed for group worship. The festival ends with the ritual of ‘Ganesh Visarjan’, where the idols are taken in procession to a waterbody or the sea and immersed in the water. Millions of people take part in the procession, accompanying the idol, singing, and dancing. Lots of people from all over the world visit India to witness the colorful festival of Ganesh Chaturthi.

Ganesha Chaturthi is celebrated in many cities across India, but some cities go all out to make it a grand celebration, accompanied by much fanfare. It is indeed a soul-stirring experience to witness and take part in the Ganesh Chaturthi celebrations in these cities. Ganesha is seen as an important deity in the Hindu pantheon, and hence people spare no effort to make the festival a spectacle that will be remembered for days to come.

Now, let us see which are the top 10 cities for the best Ganesh Chaturthi celebrations.

Ganesha is seen as the patron deity of Maharashtra, which explains the importance of the festival here. More than 6000 idols are commissioned every year in Mumbai for the festival, which is celebrated with the most grandeur in Mumbai and all over Maharashtra. The celebration was promoted by the great Maratha ruler, Chhatrapati Shivaji Maharaj, and it was also promoted by the renowned freedom fighter, Lokmanya Tilak.

On this occasion, decorated idols of Ganesha are installed in homes and Sarvajanik Ganesh Pandals. Some of the famous pandals are Lalbaugcha Raja, Siddivinayak Temple, Mumbaicha Raja, and KhetwadiGanraj. The festival lasts from seven to ten days. On day one, the idol is placed on a podium that represents a throne and is worshipped. The festival concludes with the ‘Ganesh Visarjan’, where the idols are immersed in the sea or a waterbody. Chowpatti Beach is where the most important immersion occurs. A huge crowd gathers here to witness the spectacle. The processions begin early in the morning, and it is midnight when the final rite is performed.

Pune in Maharashtra has one of the best Ganesh Chaturthi celebrations in India. Ganesh worship supposedly became widespread here during the reign of the Peshwas, who considered Ganesha as their patron deity. It is the most joyful event in the religious, cultural, and social life of Pune today. The festival lasts for ten days.

Kasba Ganpati, Ganpati Tulsi Baug Ganpati, Guruji Talim, Tambdi Jogeshwari, and the Kesariwada Ganpati are the top 5 Ganesh idols in the city. Yet another well-known Mandal is the Dagdusheth Halwai Ganpati.

Hyderabad is an ideal place to witness the Ganesh Chaturthi festivities. Ganapathi Navaratri utsavams in Hyderabad begin on Vinayaka Chavithi and end on Anantha Chaturdashi day with the immersion of Ganesha idols. Hyderabad has more than 75,000 Ganesh pandals. Khairatabad, Kamalanagar Balapur, Chaitanyapuri, Durgam Cheruvu, New Nagole, and Old City (Gowlipura) are among the well-known places where Ganesha idols are erected.

One of the largest Ganesh idols in the country is hosted by Khairatabad in HyderabadGowlipura Ganesh Pandal is one of the oldest and most popular Ganesh utsav Samithi in the Old City of Hyderabad. Ganesha idols are immersed in the Hussain Sagar Lake in Hyderabad.

The Ganesh festival enjoys a special place in the hearts of Goans. It provides an occasion for fun and frolic and also facilitates the reunion of family and friends.

Idols of the deity in different shapes and sizes are decorated and installed in well-decorated pandals by various groups and merchant associations. The festival has a special significance in Mapusa, which has the famous temples at Ganeshpuri and Khandola. One of the villages where it is celebrated the most is Marcela, which has several Hindu temples. The village artisans display great creativity in making the Ganesh idols. Idols made of arecanut, cane, coconut, and bamboo are made by them. Hordes of devotees, even those professing different faiths, flock to these temples to worship the much-loved God of Wisdom.

Ganpatipule is a small town in Ratnagiri on the Konkan coast of Maharashtra. The Swayambhu Ganpati Temple, located on the Ganapatipule beach, is 400 years old and attracts many tourists and devotees. This temple is known for its unique Ganesha idol built on pule or white sand. Supposedly, it originated by itself. One among the Ashta Ganapati temples, it is also known as Paschim Dwar Dewata. The idol is made of copper and depicts the deity sitting astride a lion. It is kept in the sanctum sanctorum. At sunrise and sunset, it is seen that a shaft of golden light penetrates the sanctum and illuminates the idol.

This temple is the center of all activities during the 10-day celebrations. The villagers carry on their shoulders a taller idol, kept in a palanquin, through the village. A priest and a drummer accompany them. Colorful celebrations, prayers, and feasting mark the event.

Kanipakam village lies in Chittoor district of Andhra Pradesh. This place is renowned for the Varasiddhi Vinayaka Temple, also called Kanipakam Temple. The Vinayaka idol here is said to be growing in size over time. The temple was built by Chola king, Kulothunga Chola I in the 11th century. It was expanded in 1336 by the Vijayanagara Kings. The temple has a rare self-manifested idol of Ganesha.

The Annual Festival (Brahmotsavam) is held for 21 days, beginning on the day of Vinayaka Chavithi. The Utsava Moorthi or festive idol is taken out in procession on all days. It is colorfully decked and taken in different carriages or Vahanams. In a unique tradition, the deity is worshipped with various Pooja items each day. People from the nearby villages visit the temple and offer Abishekam to the God, with water from their village lakes and wells.

In East Fort, Thiruvananthapuram, there is a famous Ganapati temple, which attracts hordes of devotees who believe that the deity here can grant their wishes. The notable part of the celebration is the procession from this temple to the Shankumugham beach, where the idol is immersed. Singing and dancing by local artistes, with a variety of instruments, as they make their way to the temple, is a highlight of the Ganesh Chaturthi celebrations here. The idols are made in an eco-friendly manner with clay and milk.

Though not as grandiose as the celebrations in Mumbai, Chennai too celebrates Ganesha Chaturthi with zeal and fervor. Many religious and cultural organizations get into the act, putting up idols of the god in many places in the city. The idols are often based on specific themes. For instance, one may be based on the fishing community, with Ganesha as a fisherman. Other idols are made of items like bamboo and the panchamritham (a combination of ghee, liquid jaggery, milk, honey, and yogurt). Other ingredients include dates and traditional sweet dishes like chikki, laddoos, and Mysore pa. Idols made of eco-friendly paper-mache and natural colors are also used, reducing the impact on the environment and the coastal ecosystem.

During the ten days, there will be morning and evening prayers at homes. At Pandals, special songs will be broadcast. Sweets like Modaks or Modagams (also called Kozhukattais) will be made, along with Karinjis, (similar to Modaks but in the shape of a crescent moon).

Diveagar is a small village in Raigad, Maharashtra. The main festivals here are Janmashtami and Ganesha Chaturthi. The Suvarna Ganesha temple here used to have a Ganesha idol made of gold, weighing 1.5 kg. But in March 2012, it was stolen by thieves, who also murdered the two watchmen of the temple. A silver idol replaced the stolen one. The temple is 300 years old. The place is renowned for its Ganesh Chaturthi celebrations, and many people flock to witness it from other places.