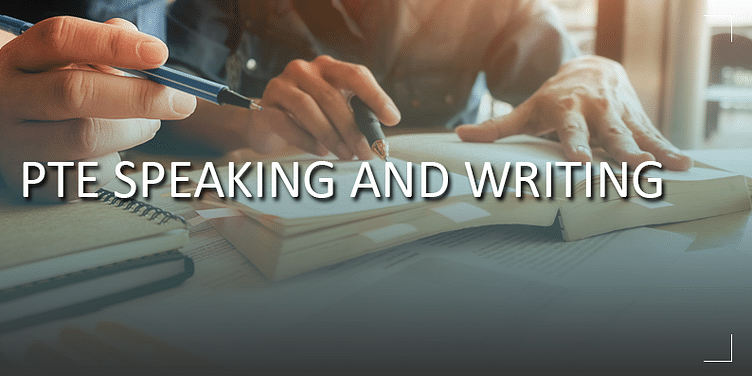 Unlike IELTS, PTE has merged speaking and writing modules. This uni-section is of 77-93 minutes long and contains 7 question types. Both the sections are attempted on the computer, for speaking every candidate is given a pair of headphones with the attached mic.

Unlike IELTS, PTE has merged speaking and writing modules. This uni-section is of 77-93 minutes long and contains 7 question types. Both the sections are attempted on computer, for speaking every candidate is given a pair of head phones with attached mic, both have to be checked before starting the test. Fortunately, PTE is quite aware about the importance of these instruments, hence there provision of mic and headphone testing at the beginning of the test.

Introduction is the first question after instrumental testing. There will be 5 general questions on computer screen which are usually about interest, future planning and reason of choosing PTE and the candidate is given 30 seconds to prepare a response and another 30 seconds to record the response with the help of microphone.

Then the speaking starts:

The candidate will listen to a sentence and later in the given time, the same sentence has to be repeated for computer in the mic. There will be 10-12 sentences.

An image which is usually a graph or a map is shown on screen and a preparation time of 25 seconds are given, after a response timer of 40 seconds starts during which the candidate has to describe the salient and striking features of the image in the mic. There will be 6-7 images.

The candidate will listen to a lecture, during listening jot down the important points or the points you've heard. Later a response timer of 40 seconds will start in which the candidate has to record the response which is based on the points he or she has listened in the lecture. It should be in the form of a central idea with beginning and a conclusion. There are usually 3 lectures of 1- 2 minutes of duration.

These are some general knowledge questions or some questions asked about a particular image or graph, which have to be answered in one to three words, usually one word. There are 10-12 such questions.

After above question type, the writing section starts:

It is usually a text of 100-150 words and the candidate has to write its summary or central idea in one sentence only. The words limit should be in between 5-75 words and the sentence structure should be complex to compound. There are 2-3 such tasks and for each task 10 minutes' of response timer is given. The response is to be types in the dialog box given below the text box.

The essay is also to be types in the given space. There may be 1-2 essays with 20 minutes as a response time for each. The word limit is 200-300 words.

Hope this insight into the first module of PTE would be fruitful and helpful for you during test preparation.

Why is ‘Horn OK Please’ painted on almost every truck in India?