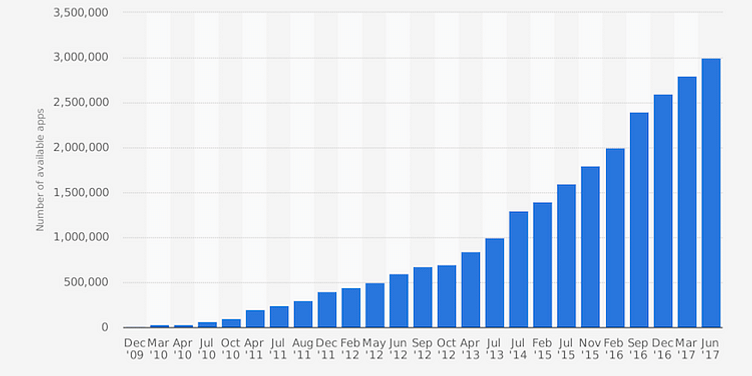 Do you think of developing an app and building a business around it? Well, that’s nothing new, people do it every day. But the vast majority of mobile apps don’t even get enough market share to survive as a business, while a few steals all the show and revenue.

Do you think of developing an app and building a business around it? Well, that’s nothing new, people do is everyday. But the vast majority of mobile apps don’t even get enough market share to survive as a business, while a few steals all the show and revenue.

According to an article by Forbes magazine, the success rate of a mobile app business is 0.01%. Truth is, most of the mobile apps don’t even manage to hit off with customers on creative and functional level. With the exponential growth in apps, app businesses, and mobile app development companies, this is something that is not likely to change.

Don’t you think, then what’s the point of building an app? Well, even though most mobile app startups fail, there are some ventures which join the league of successful applications. There must be something that they’ve been doing differently.

We have a list of reasons which makes the startups successful and help them become top mobile app development companies, and not keeping the reasons in mind makes most of the app startups fall short.

Most of the popular utilities and services are mainly accessed via mobile apps instead of browsers. Popular examples are Social Media, E-commerce, Banking, etc. Whatever you would like to do, there’s a mobile app for that.

Let’s look at some facts by Statista,

There are some apps on other marketplaces also, like Windows Store, Amazon App Store, Blueberry World, etc. that you need to compete with. All in all there are around 5 billion apps. Well you don’t have to fight them all , just the ones in your category. But, that’s still a tough journey.

In this case, you need to keep an eye on the campaigns, business offerings, strategies, updates, and social & web presence of your competitors, who are doing well in the market and make your plans and strategies accordingly.

As we know, even the niche categories in mobile apps have thousands of competitors, even the small mistakes in the design and development process matters a lot and it ruins the user experience. Some of the best app development companies understand this fact. Here are some mistakes that make the mobile app startups fail.

Large App Size: People are conscious about the space a mobile app is occupying in the phone, as more memory usage reduces the phone’s performance. While developing an app you need to keep the balance between amazing features and size of the app.

Compatibility: The mobile phone market is segregated by different OS users, majorly Android and iOS. The app startups who focus to cater to only on segment are bound to fail. You need to consider at least the major two segments while developing an app. Also, you need to make sure that the app should support phones of different sizes and resolutions.

Improper Testing: Developers can’t see their mistakes, only testers can. It is necessary to thoroughly test the app before the big launch, because it will ruin your first impression on the users. Every move, every development process must be backed by proper testing and feedback.

Poor UX/UI: Many startups think that if they launch a bug free app, their job is done. They can’t go nothing more wrong than that. The bug free code is the base of your app but users are not enthralled by it. They need an intuitive and simple experience. Your UI is the face of your app and that must be eye-catching.

If you don’t have enough resources and infrastructure for in-house development of apps, the best alternative is to outsource top mobile app development companies. They know their stuff very well.

Creating a flawless application is definitely not enough, you need to make it reach your desired customers. If you read stories of famous mobile apps, you will realise how smartly they marketed their products which made them winners in this ocean of mobile app startups. Here are some common mistakes that startups usually do in their marketing efforts.

Wrong KPIs: Tracking the correct metrics and working on them is what makes your business a success. Lifetime Value, Customer Acquisition Cost, Retention Rate, Churn Rate, are a few of them. You need to find out which key performance indicator defines your progress or regress.

Undefined Target Audience: When venturing to create a new mobile app you need to focus primarily on the target audience you are building your app for. You need to do some research on what kind of design and features they prefer? How they engage with the apps of your segment? Have a clear idea about your target audience. You should not be beating around the bush.

Branding And Positioning: Positioning your app is not what you are trying to create, it is the perception that has been made in the minds of the consumers. Importantly, initial perceptions matters and are difficult to change. You should be careful enough that your users perceive your product the way you want them too.

Poor Engagement: Your strategy doesn’t stop when you acquire new users. Those customers need to remain loyal to your app and to enjoy the entire process of using it. Not only that, they need to be convinced that your app worth to be recommended to all of their friends. It appears to be a lot of work but creating a relationship with your customers will prevent the failure of your startup.

Your app is of no use unless it reaches the customers. If you are inexperienced in the field of marketing, you are advised to hire some marketing professionals or some marketing firm to do your work.

As a startup, you need to broadly focus in two directions, the money you invest, and the money you earn. It is important to plan ahead and allocate money and time wisely. You don’t want the runway to end earlier the startup idea has time to reach its rising point. Some common financial mistakes that result in the demise of the app startups.

Improper Financial Planning: Many startups think that they’ll manage bagging the funds during the course of time, and keep investing in spite of falling short of required capital. This ends up in a fund crisis, leading to the standstill of all operations and ultimately to the shutdown.

Budgeting Mistakes: Not allocating enough money for your campaigns won’t bring you any good results. On the other hand throwing your budget on every technique that appears is also not a better solution. You just have to invest the right amount on well-designed strategies.

Poor Monetization: If you plan to convert you app into an income source, you need to come up with the right strategy for that. Selecting the correct price model, monetizing the correct set of features in the app, and choosing the correct time to monetize, are some tricky decisions that need to be made. Researching and analysing your competitors, customers and past trends, help.

In this case you definitely need the help of finance professionals, because it is the trickiest part and it involves monetary aspects.

The motive of this article is not to discourage you but to make you aware about the nuances of an app startup. These things alone can’t make your startup a success but without these, you can’t make your startup a success also. If you have some ideas that you think can bring-in some change and can solve some problems, go ahead with it. But, be cautious, well read, well researched, consult some finance, marketing, or app development companies, and plan things well along the way.