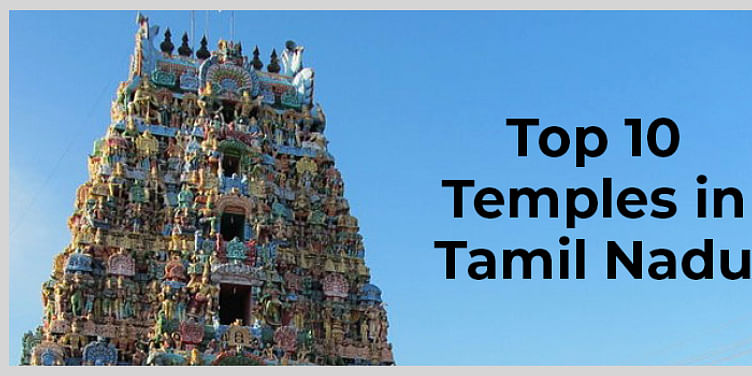 Here is a list of the top 10 temples of Tamil Nadu, their fascinating stories, and unique powers that will leave you awestruck

Tamil Nadu is famous for its ancient temples, which have a rich history, intricate architecture, and interesting stories associated with it. There are nearly 33000 temples all over Tamil Nadu, of which most of them are 800 to 5000 years old. They act as the monumental ambassadors of our rich cultural heritage and tradition. Most of them also are prominent landmarks and are visited by tourists from all over the world.

Here is a list of the top 10 temples of Tamil Nadu, their fascinating stories, and unique powers that will leave you awestruck.

Alangudi temple is a famous sacred spot for gaining the grace of Guru (Jupiter) as Dakshinamurthy. The presiding deity of the temple is Abathsahayeswarar, who is believed to be a Swayambhu (self-manifested) form of Shiva. There is no separate shrine for Jupiter here, whereas the planetary deity Dakshinamurthy is worshipped as Guru, especially on Jupiter transit days. Shiva here is also called ‘Aalangudiyaan,’ which means ‘the one who drank (kudi in Tamil) the Halahala poison (Aalam) spat by the snake Vasuki during the churning of the Milky Ocean. Worshipping here can reduce the adverse effects of snake planets, remove obstacles in weddings, and help achieve academic excellence.

Thiruvalanchuzhi temple is a 2000-year-old energy vortex and is famous for its Swetha Ganesha or Vellai Pillayar. According to the Powerspot legend, this form of Ganesha with a right-turned trunk, also known as White Ganesha, is said to be made from sea foam that emerged during the churning of the Milky Ocean. Propitiating Ganesha here can remove obstacles in relationships, marriage, and beauty. The presiding deities are Sadaimudinathar and Periyanayaki. The temple is also famous for the shrines of Ashta Buja Kali and Saneeswaran (Saturn). It is said that King Raja Raja Chozhan was an ardent devotee of this Kali and prayed to her always before waging war or making important decisions.

Vaitheeswaran temple is an important sacred spot where Lord Shiva graces as Vaitheeswaran or Vaithayanathaswamy – the God of medicine and healer of diseases. As per legend, this is the place where Shiva cured Mars or Angaraka of his leprosy curse. The Goddess is worshipped as Thayal Nayagi and Muruga as Selva Muthukumaraswamy. There is a holy Teertham (water body) opposite to the shrine of the Goddess called Siddhamruta Teertham. Mars was believed to have been cured of leprosy after taking a holy dip in this sacred water. This Teertham is also known as Gho Ksheera Teertham. ‘Gho’ means cow, and ‘Ksheera’ means milk. It is believed that the bovine Goddess, Kamadhenu’s milk flowed here when she performed Abishekam to the Goddess. There is a practice of offering salt and pepper opposite to Goddess shrine and silver-plated body organs to the Hundi as a prayer to being relief from illnesses. Performing Pooja to Mars here can reduce the adverse effects of Mars in the birth chart.

Thirukadaiyur temple is a famous temple associated with the interesting stories of Sage Markandeya and Tamil poet, Abhirami Pattar. The presiding deities are Amirthakadeswarar and Abhirami. As per temple legend, this is the sacred place where Shiva saved the life of Sage Markandeya from Yama, the God of death. This is also the place where Shiva blessed Markandeya to be a Chiranjeevi (immortal). Hence, devotees worship Shiva here for long and healthy life. This temple is mainly chosen for celebrating birthdays for the elderly couple when they attain the age of 60 called ‘Shashtiabdapoorthi,’ as a prayer for their long and happy life. Worshipping here can bring relief from adverse effects of planets and grant wedding and child boon, prosperity, and success in endeavors. People also pray for job opportunities and business profit.

This temple is exclusively dedicated to Saraswati, the Goddess of knowledge, wisdom, and arts. The Saraswati shrine here is said to have been erected by the Tamil poet, Ottakoothar, after celebrating Vijayadasami, the 10th day of victory following Navaratri, a 9-day festival in the Tamil month of Purattasi (mid-Sep to mid-Oct). It is believed that this place was gifted to Ottakoothar by King Raja Raja Chola 2; hence, this place is called Koothanur. The presiding deity, Saraswati, is adorned to white saree and sits in Padmasana (lotus pose) on a white lotus. Devotees bring their children on Full Moon day, and the word ‘Om’ is written on their tongues with a stick dipped in honey, for success in academics, arts, and poetry. Offering prayers here is also believed to unite estranged couples, grant business profit, and job promotion. Childless couples offer ghee at the Goddess’ feet seeking progeny boon.

Saneeswaran temple in Thirunallaru is a famous temple dedicated to Shani (Saturn) in Tamil Nadu. ‘Thiru’ means revered, and ‘Nala’ denotes King Nala, while ‘Aaru’ means healing in Tamil. Thus, Thirunallaru denotes the place where King Nala was healed. It is one of the Navagraha Sthalams, the temples that are devoted to the nine planets. The presiding deities of the temple are Shiva as Darbharanyeswaran and Goddess Parvati as Bhogamartha Poonmulai Amman. It is believed that the Shiva Lingam in this temple is Swayambhu (self-manifested). People worship Saturn here during Shani Peyarchi (Saturn transit) for relief from Saturn’s malefic effects and seek his blessings. It is recommended to visit this temple if you have a badly placed Saturn in the birth chart or are undergoing Saturn periods.

This is a 1000-year old Vishnu temple, where the presiding deities are Nityakalyana Perumal and Komalavallai Thayar. Out of the 108 Divya Desam temples of Vishnu, this is the only place where the wedding of Vishnu as Varaha and Lakshmi as Akhilavalli Thayar is celebrated all through the year. Hence, he is called Nitya Kalyana Perumal, the one who graced in wedded form every day. Vishnu graces as Varaha standing majestically with one foot on the ground and the other folded and placed on Adisesha’s head. The Goddess sits on his left lap. It is believed that Sage Markandeya worshipped Vishnu here. As per legend, Vishnu gave Darshan as Varaha to King Bali here. Offering prayers here is believed to relieve from Drishti Dosha (evil eye), marriage delays, and adverse effects of snake planets – Rahu and Ketu.

Thirumananjeri temple is the sacred spot where Parvati got married to Lord Shiva. It is a famous place where unmarried people offer prayers here to remove obstacles and get married to their life partners. Wedded couples return to this temple after the marriage and perform Pooja as a token of thanksgiving for the wedding boon. The presiding deity is also called Udhvaganathar, and the Goddess graces as Kokilambal. Dakshinamurthy is seen in a meditating or yogic pose. It is believed that this is the sacred place where Rathi requested Shiva to bring back her husband, Manmadhan, to life, who was burned to ashes when he tried to wake up Shiva from the trance. Lord Shiva and Goddess Parvati are seen in their wedded form and is believed to remove all hurdles in marriage. People also worship here for the unison of estranged couples and progeny boon.

This is a 1000-year old Powerspot and is one of the Navagraha Sthala and is dedicated to Suriyanar or Sun God. The temple also houses his consorts – Ushadevi and Chayadevi. This is one of the two temples dedicated to Sun God in India, with the other being Konark temple in the North. Sun God graces here facing west, holding lotus flowers in his hands, and have his two consorts on either side. Surya’s vehicle horse faces the main shrine. To cool down Sun's scorching heat, the presiding deity’s shrine has Guru’s (Jupiter) shrine opposite to it. This is the sacred spot where Sage Kalava Muni got relieved of his leprosy curse as per legend. Offering prayer here can bring relief from the adverse effects of the planets, especially Saturn. People also perform remedial Poojas during Sun Dasha/Bhukti (major/minor) periods in the birth charts.