What are the latest web development Trends For businesses In 2019? 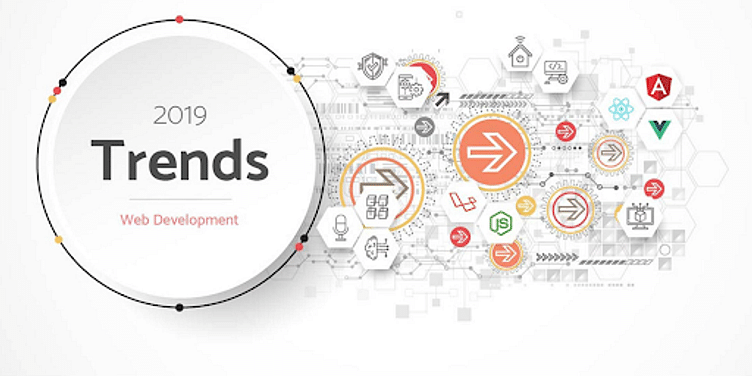 It’s impossible to go along with web development trends; because it is subject to change. Rarely, a week passes without any release of a new JS framework, complicated build tool or testing suite.

Such changes and newest web technologies create an atmosphere of excitement and confusion among those who are dependent on their website to survive in this digitally competitive era to run their business where all is available at the fingertips as the future of web designing and web development have a very wide scope.

Each and every one of them is praised enough to become compulsory to learn. In this article, some changes happened in 2018 are mentioned and the latest trend of web technologies in 2019 too.

It’s not necessary for any technology or framework to be brand new to be a part of our list. The only thing requires is its rapid growth and evolving interestingly.

Single Page Applications (SPAs) attained immense fame in 2018. It is a simple concept that was made possible by the power of modern Javascript.

Single Page Apps load a page once then don’t load it again or navigate to any other page. In place of this, Javascript is adopted to control the DOM and provide new layouts in the browser.

It is possible to send JSON data between the server and the client, but a page functions like a desktop application more than a conventional website.

It can render a much snappier experience to a user and really modify the site responsiveness, however, needs a sizeable chunk of code that is shipped to the browser.

This concept has remained famous for a short time. However, it witnessed so much engagement of developers in 2018.

Some other expected improvements to core web technologies also took place in 2018. It’s wise to say that when CSS and HTML were thought, both of them were not designed to control the modern web.

Therefore, CSS preprocessors and libraries are widespread due to providing a more comfortable, abstract interface to build and layout UIs.

Bootstrap, which is the most famous front-end library, has a grid system widely used to put content in a position for many years.

In 2018, a native CSS grid was adopted, which was supported by all main browsers. It’s a big thing for  convenient aligning.

Page load speed became an interesting topic last year. That’s why Google find it necessary to use it in its ranking algorithms for search.

Moreover, it’s open source AMP or Accelerated Mobile Pages is still popular. It is also controversial due to the control amount Google has over it.

ALSO READ: How AI & ML Will Impact The Future Of Mobile Apps?

It’s wise to discuss some backend/server-side changes that can be seen in 2019 before talking about front-end technologies.

These latest web technologies must be taken into account. Today, your backend requires a continuous environment. The purpose of this is to make the testing, development, and production smooth.

Containers also give a great deal of modularity. It makes both the development and maintenance very simple.

If you want separate containers for your application, database, Redis and compute workers? No issue; in fact, it’s encouraged.

It makes very easy to switch out different modules and change the size of your services as needed.

Serverless computing is deeply linked to containers, and that’s the biggest change taking place at the moment in terms of how an application and website are deployed.

Serverless computing makes possible for you to write and deploy code. And for that, you don’t need to touch the underlying infrastructure.

Anybody having deployed a website after manually setting up servers, load balancers and the like has an idea of how much time configuring infrastructure can consume apart from developing app/web time.

Serverless code is written in the form of a set of independent ‘functions’, these functions are event-driven. All these modules run only when they are triggered, spinning down when not being used.

The benefit of this is you only pay your serverless provider the computation happens. You will pay less in case your site experiences a quiet period.

In case, you have a sudden rush in demand, then it will be very simple to scale your service by adding thousands of more module instances quickly.

In the end, it allows to scale your provisioning by CPU, network use, or memory rather than units of ‘a new server’.

If you want something for technical efficiency and maintenance, then pick on-demand computing.

2019 is going to be a very exciting year for a new level of adoption. And, it is also a promising year for open source serverless technology like OpenFaas.

The following are the trends in the front-end expected in 2019:

Web apps will be more modular

The reason behind the popularity of front-end development frameworks like React and Angular is clear, and mostly, it comes down to modularity.

Writing a large, monolithic HTML and JS file makes for code which is hard to use again between pages, slow to re-factor, and bad to unit test.

In place of this, it’s better to use a framework to make components, each having its own scripting and styling, and defined outputs and inputs.

It not only makes very simple to use the same building blocks again, but the codebase has become much simpler to comprehend and plug into a test suite.

Why it is being mentioned is because there is a new framework on the block implementing the component model very well. Due to this, it reached its peak in 2018.

Vue’s striking recent success will keep continuing according to a recent web development news. It’s performed very well since it implements what a developer wants exactly, in a lightweight package. Having won the hearts of developers all over the world, it has established its own place in the world of latest web development trends. Its latest growth shows its journey very well.

If you are in quest of your front-end development skill improvement, and you have learnt Vue so far, it’s wise to do so in 2019.

Is server-side rendering moving to its end?

A decade ago, the widely accepted way to make a website was to render each of the files to server-side before it is sent to the browser by using PHP and ASP.NET technologies.

After that, Javascript libraries/frameworks used to start showing up, at the beginning slowly, then in a large number.

Most parts of web applications moved to client-side, until we reached today. Today, it standard to create a Single Page Application completely in the browser.

The above mentioned fact doesn’t mean that server-side rendering has been over today, far from it; a large number of new applications keep using it because it is as per their needs.

Server-side rendering is best for a largely static site and is great for the SEO.

Overall, making the decision between client-side and server-side rendering is a confusing and complex balance, which banks on network speed, the type of interactive/dynamic content on a site, and other factors.

In a nutshell, server-side rendering usage is still in demand.

There is a large number of stats on apps vs websites on mobile devices. Although mobile sites get around 12 times as many as visitors as applications, users spend around 20 times more on apps than mobile sites.

Now the question arises ‘is there any method to get the user engagement of an application without the tension of installing one’?

There is a term called PWA or Progressive Web App known for fulfilling a heap of requirements and best practices, mainly for mobile use.

Progressive Web App needs to load reliably and load fast, with snappy navigation and same feel to native apps. A PWA is designed to be added to the home screen of mobile devices and able to operate offline.

Progressive Web Apps have become Google’s favourite; Chrome will automatically ask a user to add a website to their mobile home screen if it fulfills the PWA standard.

An open source tool is also created by them called Lighthouse to audit your site to PWA criteria and integrate into CI workflows.

Web technologies trends in 2019, in the front-end part we discussed:

latest web development technologies given attention in this article are:

Although new technology in web development and the latest trend in web technologies in 2019 were discussed across the article, only having sufficient knowledge is not enough to survive in this digitally hectic era you need might need to hire expert for web development services.

You will definitely need to hire web app developer dedicated and proficient. Making apps for programmers become convenient if they have someone experienced behind them like ValueCoders.