Using cobots, this business is automating manufacturing for Indian SMBs 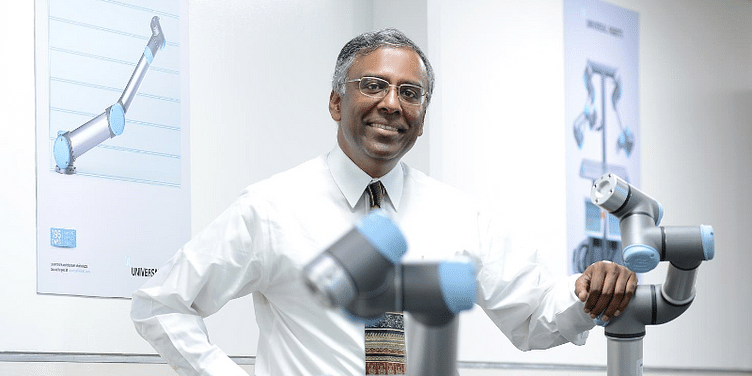 Aurolab, the manufacturing division of Aravind Eye Hospital, was looking for a solution to reduce the cost of manufacturing intraocular lenses (IOLs). A crucial component for vision restoration, the lenses were proving to be too expensive to import or manufacture locally.

Employees stood at machines for eight hours a day, loading and unloading parts. The non-profit manufacturing organisation realised its late night shifts, product variability, worker transitions, and ergonomic challenges faced by the staff were contributing factors to the high cost of its products.

Aurolab decided to tackle the challenge by deploying cobots (collaborative robots) made and supplied by Denmark-based Universal Robots.

“The cobots were assigned to do the heavy lifting. The employees would work alongside them, conducting quality checks and overseeing the smooth flow of the production line,” says Pradeep David, General Manager, South Asia, Universal Robots, in an interaction with SMBStory.

“The transition to cobots helped Aurolab’s workforce acquire new skills and gave them vital experience in robot handling. Today, with the help of seven cobots, Aurolab produces 10,000 lenses per day in a cost-efficient manner,” he adds.

Besides Aurolab, Universal Robots has worked with several large Indian manufacturing companies and SMBs to deploy affordable, lightweight, and flexible cobots. These cobots are used by companies in industries such as automotive, FMCG, electronics, education, healthcare, and pharmaceuticals.

Pradeep says Universal Robots is focussing on deploying cobots in the SMB segment as a way of “democratising automation.”

“This means automation solutions are no longer accessible only to manufacturing giants. Even SMBs can deploy cobots strategically to become as competitive as possible. Small and medium companies trying to grow into profitable enterprises are successfully employing cobots to Make in India to improve productivity and quality. Some are tripling their production rates and achieving ROI in less than a year,” he says.

Cobots are essentially robots that work on the principles of human-robot collaboration. When deployed on a factory floor or in a small manufacturing space, they share the workspace with human employees and work alongside them.

“Larger, more cumbersome industrial robots need a large amount of space to be caged away to protect people on the shop floor. Cobots are safe to deploy without any fencing (subject to application risk assessment), with a low footprint,” Pradeep says.

He adds that cobots also come with advanced protective stops, which are activated when an object blocks the path of a cobot, preventing risk of injury.

By changing the end-of-arm tooling, cobots can be deployed for a multitude of applications. Universal Robots has observed the most popular applications are machine tending, glueing and dispensing, screw driving, quality inspection, injection moulding, and pick-and-place.

“The robotic arms are easy to program, and can be deployed in nearly any environment that requires them to take over repetitive, high-precision tasks with payloads under 16 kgs,” he says.

Cobots are flexible and lightweight enough to even be mounted upside down, and require only a single-phase power supply whereas traditional robots need a three-phase power infrastructure. This further brings down the barriers associated with traditional automation.

Even though cobots give you several advantages when it comes to manufacturing, there is considerable paranoia associated with the rise of automation. And the most common fear is that robots are taking over people’s jobs, especially among SMBs.

“From Mahindra & Mahindra to L’Oreal, our cobots are used by some big players across industries. While they are slowly gaining popularity among smaller businesses, the concept of collaborative robots is new in India. The term robot still has many negative connotations in a country with such an abundance of labour,” Pradeep says.

In 2019, The International Federation of Robotics (IFR) found India averages just four robots per 10,000 employees in the manufacturing industry.

“This is a challenge Universal Robots has been trying to address by spreading awareness that deploying cobots allows people to be upskilled for more interesting work and tasks. We would like to shatter the misconceptions by continuing to evangelise the concept of human-robot collaboration so that SMBs are empowered to use the same technology industry leaders have deployed,” he adds.

Industrial robots are usually heavy, fixed installations. They can be expensive and cumbersome to automate and reprogram, and require the assistance of external engineers. SMBs run a tight ship and can only work with robots that can be deployed and programmed easily.

Pradeep maintains that Universal Robots’ cobots can be swiftly operated by employees of SMBs without needing any technical education or qualifications.

“We go the extra mile in ensuring existing employees can operate cobots and also redeploy the machines for a variety of functions themselves. This relieves the fear that most workers have whenever a new machine is brought in by the management, as they realise this technology is there to help and upskill them,” he says.

In Aurolab’s case, Pradeep explains that the factory floor workers are largely young women with basic high school education. And they were able to quickly pick up on how to use and oversee the cobots.

Pradeep claims first-time robot users can learn how to program the cobots for simple applications within one day.

The company’s products are priced based on the complexity of application. Requirements such as input/output conveyors or specialised end-of-arm tooling also have an impact on the cost.

“We sell through a system of authorised channel partners. The final cost of a cobot deployment is determined by them, based on the cobot model, additional accessories, programming, installation, and other factors required for the application,” he says.

Universal Robots was founded by Esben Østergaard, Kasper Stoy, and Kristian Kassow in 2005 in Denmark.

The trio came together as part of a research team at the University of Southern Denmark, and their work pioneered the cobot industry. In 2015, the company was acquired by US-based Teradyne Inc.

With 65 patents under its belt, Universal Robots has become a market leader for collaborative robots. Pradeep claims the firm has sold over 46,000 cobots, and holds approximately 50 percent of the global cobot market.

Some other global players in the cobots industry include Automata, Precise Automation, ABB, Productive Robotics, and relatively new entrants Franka Emika and Aubo Robotics. They are all vying for a larger piece of a global cobots market projected to grow from $981 million in 2020 to $7,972 million by 2026 at a CAGR of 41.8 percent, according to MarketsandMarkets data.

With South Asia emerging as an important geography for cobots players to venture into, Universal Robotics entered India in 2016. It set up its South Asia regional head office in Bengaluru.

“Today, the company is a profitable enterprise, with a revenue of over $248 million in 2019 and a team of 740 employees across 20 countries,” says Pradeep.

At present, several industries are looking to digitise India’s SMBs as the coronavirus pandemic takes over the world. With India looking to boost its manufacturing and become ‘aatmanirbhar’ or self-reliant, the role of automation is even more crucial than before.

However, traditional automation and industrial robots still remain out of reach for SMBs. This presents an opportunity for cobots to help these businesses meet production targets without worrying about the shortage of labour.

“In the current scenario, it is more vital than ever as businesses are operating with limited staff and may not be able to use traditional automation methods to meet the demands of quantity and quality. Using cobots can result in faster completion of tasks, higher efficiency, and better quality,” Pradeep says.

With social distancing and hygiene becoming a priority due to the COVID-19 outbreak, deploying cobots can reduce the need for contact between human workers in assembly lines and SME shop floors, where space is often a constraint.

An MIT study found a cooperative process between humans and robots can reduce idle time by 85 percent. Pradeep believes this increased efficiency can not only help in implementing social distancing norms but also limit the workforce from negatively impacting production.

“With COVID-19 cases increasing by the day, cobots can help SMB manufacturers meet demands and stay competitive without compromising on stringent hygiene measures to flatten the curve,” he says.

Pradeep believes the Make in India and Atmanirbhar Bharat initiatives are further driving the need for more advanced solutions in manufacturing. According to him, cobots on the factory floor will only help local manufacturers compete on a global scale.

“Cobots are making it possible for the businesses of our nation to reach a globally-competitive stature, and place India on the map as a world-class manufacturing hub,” he says.