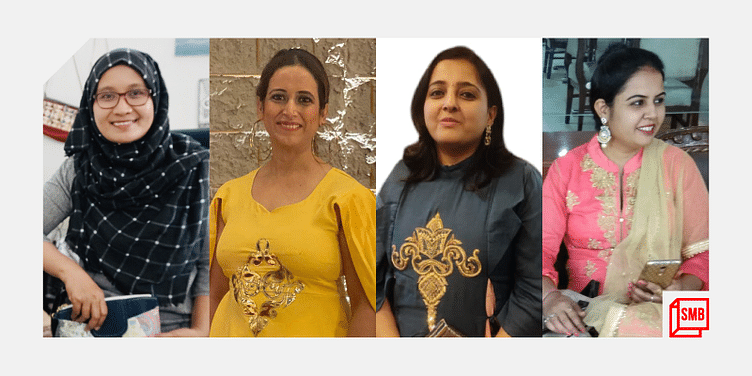 On the occasion of International Women’s Day, SMBStory spoke to women entrepreneurs right from urban cities to small towns to understand what entrepreneurship is to them.

More women than ever before are breaking conventions and joining the workforce to lead independent lives. According to IBEF, India has 432 million working-age women and 13.5 –15.7 million women-owned businesses, which provide a great impetus to the economy.

Though the data attributes to the trend of how women entrepreneurship is on the rise, a lot more needs to be done to change the mindset in Indian society.

On the occasion of International Women’s Day, SMBStory took a deep dig to talk to women entrepreneurs – not just from urban cities but from small towns as well – to understand their take on entrepreneurship, and how they are breaking barriers and becoming successful.

Not wife, daughter, but an entrepreneur

Kolkata-based Akanksha Lakhotia, Founder of Celebrity Club, a kids clothing brand, says that every woman should pursue her dreams. They should have their individual identity.

Prior to starting her own business, Akanksha was working in a corporate. However, after her wedding and kids, the responsibilities doubled and she had to quit her job. But that left a void in her life.

“I also wanted to make my own identity. So, I discussed my business idea with my husband and started a kids clothing business in 2017 on a very small scale,” she recalls.

Initially, Akanksha was just trading garments taken from wholesalers as she wasn’t in a position to invest a huge sum.

“In 2018, I listed the brand online on ﻿Meesho﻿ and other ecommerce platforms that garnered me a lot of recognition. Today, I receive 500-600 orders daily and we are making Rs 5 crore annual turnover. Now, my husband has also quit his job and joined the business.”

Started in a small, 100 sq ft room, Celebrity Club today runs in a 4,000 sq ft facility with around 25 employees. Akanksha has now successfully created her own identity.

After 16 years of marriage and coming from an established family business background, Nivea Kakkar decided to walk the path of entrepreneurship but not without inviting people’s scepticism.

“People used to ask me ‘why do you want to do such a small business’, or ‘you do not need to do this’. But I was not doing this just for money, but also for my own happiness,” Nivea says.

She followed up with the business’ success with her Ludhiana-based brand Rolling Frosty.

Nivea is a home chef and receives around 100 to 200 orders on an average per month. Rolling Frosty caters to various hotels and resorts located near and around Ludhiana. Nivea’s speciality is making wedding cakes.

For her, there’s no limit to what one can achieve if that makes them happy and she is also in pursuit of growing and scaling her small bakery business by also starting up baking classes.

An escape from suffering

Talking to SMBStory, Suman Kumar from Hisar, Haryana who started as a reseller for cosmetics, says she was undergoing tough financial circumstances when she started her business. Working as an accountant since the time she was unmarried, her two miscarriages took a toll on her physical health.

“I was suffering a lot and after two miscarriages, I was blessed with a son and that’s when I decide that I have to escape from my suffering and do something for my child’s and my well-being. This was when I started Keshav Fashions, named after my son,” Suman says.

Starting a business gave Suman a lot of courage. Today, she sells cosmetics online, primarily on Meesho and other ecommerce websites like ﻿Amazon﻿ and ﻿Flipkart﻿. She says she sells products worth Rs 1 lakh per month, and is on a growth trajectory.

“If you don’t start up, you will not know how far you can go. Don’t be afraid to fail or make mistakes, because only then can you learn to do better,” says Elvira, Founder of Guwahati-based Chezvies Patterns.

Chezvies Patterns is an online portal where Elvira shares tips and gives tutorials for those who want to start making bags. She has also established her online shop where she sells handmade wallets, mobile pouches, spectacles covers, drawstrings bags, home gifts, and a lot more.

Hailing from Guwahati, Elvira is a lawyer by profession but her love for sewing and creating her own version of everything made her start Chezvies Patterns. The brand currently generates Rs 1 to 1.25 lakh quarterly from Etsy alone. Elvira says that she is managing everything alone, and in the next few years, she hopes to have a team to help create better content that can benefit others.

“I just wanted to start and not think of anything else, and here I am with a motivation to do more,” Elvira acclaims.

It's perseverance and resilience that kept these women entrepreneurs high through thick and thin. They broke barriers, turned their adversities into strength and here they are in a zest to do more.

Fintech and MSMEs are together changing the face of digitalisation