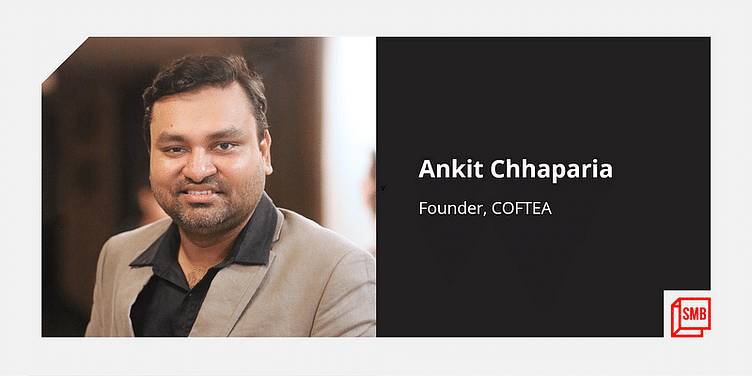 Ankit Chhaparia launched B2B venture COFTEA in 2014 initially to sell coffee and tea vending machines. He later explored, and found success, in selling premixes through both offline and online channels. The pandemic, which affected its core business, has further pushed it to innovate.

While India is one of the largest consumers of tea, accounting for about 30 percent of the world tea output, coffee has an equally enthusiastic fan base in the country. For Ankit Chhaparia, founder of ﻿COFTEA﻿, this love for beverages inspired him to start his venture.

A Chartered Accountant from Kolkata, Ankit had always dreamt of becoming an entrepreneur. After working for a few years in cities like Bengaluru and Hyderabad, he came back to Kolkata in 2013 to start a business.

“During those days when I was working, I observed how drinking tea or coffee from vending machines was a big trend,” he tells SMBStory. Recognising the massive opportunity in this space, he decided to start a vending machines trading business in September 2014.

He would outsource the vending machines from factories situated in the northern part of the country and would sell or rent them out to corporates such as Senco Gold, IRCTC, etc. The cost of these machines started at Rs 17,000 and went up to Rs 1.4 lakh.

So far, COFTEA has installed 100 coffee/tea vending machines across the country.

Getting the right mix

As the vending machines business began to pick steam, Ankit saw another gap in the market. “We got a lot of feedback that the premixes that were there in the market, especially of Nescafe, were not receiving a good response. They were too sugary and had quality problems as well,” the founder says.

This feedback became a turning point for Ankit and he decided to explore tea and coffee premixes business. He invested Rs 25 lakh to set up a factory and decided to start manufacturing in the year 2015.

The unit has a capacity of producing 500 tonnes of premixes per annum.

“Initial days were very challenging. I would question if I was investing the money in the right manner or not. But our customers really helped us in perfecting our product,” Ankit tells SMBStory.

He says that his customers would give feedback such as reducing the sugar content, and increasing the tea/coffee content. Distributors also gave COFTEA some points to improve. All these factors, he says, helped in making a product which tastes good as well as is healthy.

In FY20, the brand clocked Rs 82 lakh and in FY21, the revenue touched more than Rs 1 crore, claims Ankit.

Ankit says that he is competing with several brands in the market like Nestle, Blue Tokai, Tata, Starbucks, Cafe Coffee Day chains and more.

Ankit says that the company is focusing only on B2B (business-to-business) orders from corporates when it comes to the vending machines business.

As far as standing out in the premixes market is concerned, he says that the company is focusing on delivering “premium quality” to their customers.

The average selling price of COFTEA’s products is Rs 350 for one kilogram. It sells through Amazon and a network of more than 15 distributors in the eastern part of the country. In the next three months, Ankit plans to start selling through its own website as well.

The COVID-19 impact and the road ahead

COFTEA was hit very hard during the COVID-19 pandemic. “Our business was hit because offices and corporates were all closed,” he says. To mitigate the impact of the pandemic, the team launched an immunity booster protein which can be mixed with water or milk and helps in improving the immune system.

“I was only focusing on what we can do to keep the business going and introducing this kadha worked,” he adds.

Ankit adds that whenever a COVID-19 wave hits, sales of this product go up. When the cases start dipping, the demand for the immunity booster also decreases.

Going forward, Ankit has several plans for his business. His priority is to raise capital from a private equity fund, which he says, will be used to expand operations across other parts of the country. Ankit says that in the next 12-18 months, the company will also start exploring Saudi Arabia and Bangladesh markets to sell its products.