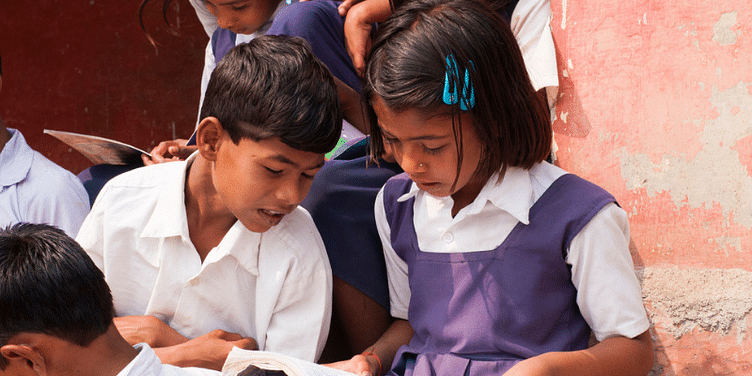 With an aim to provide quality education in government schools, and ensure that students are ‘saksham’, the State government revamped its education system by figuring out ways to engage its teachers more.

Class VII students of the government high school in Hisar II Block in Haryana are not your typical children. Why? They attend school even on Sundays! There is a renewed vigour in the air to learn, and learn well.

As her classmates rattle off multiplication tables in the background, 12-year-old Jyothi tells me,

“Earlier I knew nothing in maths. My knowledge was below that of an average seventh grader, and I had zero interest in studies. The classes weren’t fun either.”

Things are done a little different in this school now, with teachers ensuring no child is left without grasping concepts. In the past year, the class teachers have spent one hour every day revisiting old topics that were difficult for the children to understand. Further, they employ digital mediums using a tablet to make lessons more colourful and interesting as well.

Also read: What needs to be done to improve India's public education system?

Haryana is witnessing a massive rural education reform. The State government is heading a unique ‘Saksham Ghoshna’ programme to achieve 80-percent grade-level competence (a measure of a child exhibiting learning competencies appropriate to her grade) amongst government school students by the end of 2019.

This focus on school education sharpened in Haryana when the government took into the account the state’s dismal record on that count. Says Rakesh Gupta, Director General Secondary Education, Haryana,

“If we look at NCERT’s various National Achievement Survey (NAS) and ASER reports, the surveys point out that the quality of school education in the state has been going down for years. Government school teachers in Haryana are well-qualified but somehow the link is missing. Classroom studies have not being meaningful. This was the initiation point.”

In 2014, only 40 percent of all students in elementary in the government schools of Haryana were reported to be grade-level competent. The 2016 ASER report stated that in Haryana, the “learning outcomes are far below grade level for many children currently enrolled in school” across the country. As a remedial step, the Manohar Lal Khattar government initiated multiple reforms in the State Education department, which included teacher training programmes, taking into account teacher vacancy, and developing integrated data systems, among other steps.

Through multiple initiatives, the State government claims that over 65 percent students are now grade-level competent in Classes III, V, and VII, while 26 out of 81 blocks have been declared ‘Saksham’ (meaning capable), as assessed by third-party organisation Gray Matters.

Also read: A letter from Shaheen Mistri – capturing reflections from 10 years of Teach For India

A lesson on teachers

While the primary objective of school education is to ensure better learning outcomes for students, a majority of the students in the Indian education system remain below their grade-level competence.

While the reason for this worrying statistic is multi-layered, Deepak Kumar, Headmaster of Government Public School Kutail, in Gharaunda block, Karnal district, blames the lack of drive among teachers.

“Teachers were lazy and had zero motivation to teach. And this attitude was then reflected on students as well who were absent from school very often. At times teachers were not even aware of which chapter they were supposed to teach.”

Teachers are also not trained well enough to perform their primary duty of teaching. Since training was only provided once every year, it was also limited in its scope and the curriculum it could cover. Teacher learning materials— textbooks, workbooks, planning diaries— usually didn’t reach schools before the start of the academic year, leading to a loss of two to three months of teacher preparation time, and even teaching.

Further, teachers are burdened with administrative and non-academic tasks. In September 2018, a report by the National University of Educational and Administration (NUEPA), highlighted that less than a fifth of a teacher’s annual school hours (19.1 percent) was spent on teaching activities. Teachers spend the rest of their time thus: 42.6 percent in non-teaching core activities, 31.8 percent in non-teaching school-related activities, and 6.5 percent on other department activities.

Thus, there was a need for immediate intervention in Haryana’s school education system. Adds Deepak,

“Saksham was necessary to ensure that all the teachers become active participants in the education system. Once the teacher starts to show interest in classrooms, the students will naturally become active and this will make their parents also involved.”

The state started systemic reforms in education in 2014 and converted it into the Saksham Haryana movement in 2017 with support from Samagra. Michael and Susan Dell Foundation has been supporting the state since 2014 in these efforts. The programme carried out a detailed analysis and diagnosis to identify problem areas in the education system. Rakesh says,

“By 2017 we had understood the problem and we felt that our focus should be to enhance a student’s learning outcome. We decided that there should be ‘gamification’ among schools. We held discussions with the teaching community to figure out ways to incorporate change and ensure that each block has at least 80 percent grade-competent students.”

To drive momentum on-ground, young professionals were hired under the Chief Minister Good Governance Associates (CMGGA) to act as catalysts for systemic reform. They also coordinated education initiatives in each district, and reported directly to the CM’s office.

Also read: With 14 crore children in primary schools why Indian education needs to be democratised

The government initially started a Learning Enhancement Programme (LEP) where teachers were told to spend the first hour of each day bridging past learning gaps. LEP manuals were distributed to all 40,000 teachers in 119 blocks of Haryana. To further support teachers, ‘DigiLEP’, a course shared to teachers on a WhatsApp group, was developed to train teachers on remedial teaching though an interactive audio-visual medium. To ensure that teachers are following the programme, these videos are tracked by the government to keep track of the number of downloads, number and duration of views, in order to understand the efficacy of the content.

Till date, over 77 percent of elementary schools have dedicated over 30,000 hours in training.

Saksham Adhyapak,  a dashboard based on competency-linked assessment was developed for teachers, to conduct student assessments six times in a year. The dashboard showed student performance in various subjects and highlighted the concepts that students were unable to comprehend, thereby informing the teacher about the child’s weak areas. Rakesh says that every government school in the state gets an inspection visit at least once every two months.

“We got government officials to conduct random school inspections for academic monitoring. Earlier, inspection was limited only to monitoring the utilisation of funds and school infrastructure.We created an academic monitoring ‘pro forma,’ which they need to fill for recording learning levels by randomly selecting some students to answer some questions.”

And the efforts pay off

Education department officials in Haryana were given the freedom to nominate their block for third-party assessment. To create competition among the blocks and motivate teachers and students alike to participate in this initiative, the Chief Minister would recognise the block officials and would organise a “large scale show-and-tell event in their honour.”

Further, when all blocks in a district are declared ‘Saksham’, the entire district is also accorded the ‘Saksham’ status. Says Rakesh,

“Within one year of the campaign’s launch, 26 out of 81 blocks assessed have been declared ‘Saksham’, with 18 other blocks missing the target just by a whisker.”

Till date, six rounds of assessments have been done and a seventh round of assessment in government schools is due later this month. The Haryana government now prepares to announce Saksham Ghoshna across its 119 blocks, and Rakesh is confident that this feat can be achieved within the coming few years.

“We now look forward to extending this programme to other grades like Class IV, VI, and VIII students. Our aim is to achieve excellence in education where each child who writes their board exam within the next three to four years is at par with their peers in private schools.”