Swachh Bharat: Akshay Kumar says he has got the plot for ‘Toilet’ part 2

The actor stumbled upon the plot for the film in Delhi this weekend, quite serendipitously.

Bollywood actor Akshay Kumar on Saturday said he has got the plot for Toilet - Ek Prem Katha 2. The actor was in a panel discussion in Delhi during the book launch of HarperCollins’ ‘The Swachh Bharat Revolution: Four Pillars of India’s Behavioural Transformation,’ when he made the remark.

During the course of the discussion, Unicef Representative in India, Dr Yasmin Ali Haque, mentioned how in a demographic shift, women have taken on the role of constructing toilets in India as Rani Mistris (Raj Mistri is a common term to describe someone with construction expertise and is a male dominated profession). She went on to narrate that last year, about 2,000 women in Jharkhand’s Simdega district managed to build 7,000 toilets in just five days. Reacting to this Akshay said, “Yasmin has given me the plot for Toilet - Ek Prem Katha 2”.

In June last year, the actor had tweeted that he will soon be coming out with Toilet 2. “Time to get ready for the next Blockbuster — Mission #Toilet2! Iss baar badlega poora desh (The whole country will change this time)! Coming soon,” Akshay had tweeted.

Akshay also shared a short video in which he said: “Toilet toh bana liya, par katha abhi bhi baaki hai. Main aa raha hun leke ‘Toilet’ part 2 bahut jald. (We made toilet, but the story is not over. I am coming soon with ‘Toilet’ part 2.” This led to the speculation about a sequel. However, Akshay later clarified that he had been appointed as the brand ambassador for a toilet cleaning product, and the teaser was a part of that campaign.

The PM Modi-led movement that was launched in 2014 with a promise to make India open defecation free (ODF) by 2019, has helped break taboos, according to Yasmin. “Earlier, people would not talk about toilets and defecation, and that has changed,” she said.

The October 2, 2019 deadline, which is Mahatma Gandhi’s 150th birth anniversary, to make India ODF, will be met by the government, said Parameswaran Iyer, Secretary, Ministry of Drinking Water and Sanitation, who is also the editor of the book.

The book aims to provide a wide range of perspectives on PM Modi’s Swachh Bharat Mission. The foreword has been written by the Prime Minister himself.

Speaking on Narendra Modi’s leadership and his role in the initiative, Akshay said, it is important to listen to what the “leader of the country” is saying. “If he is taking us in the right direction, everyone will be willing to follow...and that is what has happened with Swachh Bharat,” he said. He also added that he was motivated by Parameswaran Iyer to make the first ‘Toilet’ movie.

According to Parameswaran, who took up the role in the ministry in March 2016, it was a “little bit of business as usual” when he came on board. He went on to elaborate, “I realised we needed some disruption in the ministry. We got in youngsters, I started hanging out with Amitabh Kant who brought about great change with Niti Aayog. Then, we started doing grassroots trips and programmes to spread the word. We had PM Modi, our communicator-in-chief, and then we had Akshay with his movie Toilet, which was transformational. We did things that were different that created a buzz.”

Gajendra Singh Shekhawat, Union Minister for Jal Shakti, who was also present at the event, said that social taboos can only be broken by opinion makers like the media and Akshay. The government alone cannot do it without the participation of such influencers and people’s participation, he added.

Amitabh Kant concurred and said community participation is essential, otherwise such programmes cannot succeed. The Niti Aayog CEO went on to add that the most successful and revolutionary move by the Narendra Modi government has been the ‘Swachh Bharat Mission’. “And mind you, there have been GST, demonetisation, and several other crucial initiatives by this government,” he added.

According to the government, over the past five years, nearly 10 crore toilets have been built under the SBM-Grameen programme, and rural sanitation coverage has increased from 39 percent in 2014 to 99 percent in June 2019. 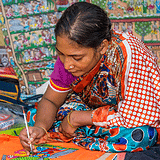 How to empower more people in rural India? These organisations show the way