How these 5 children are making the world a better place 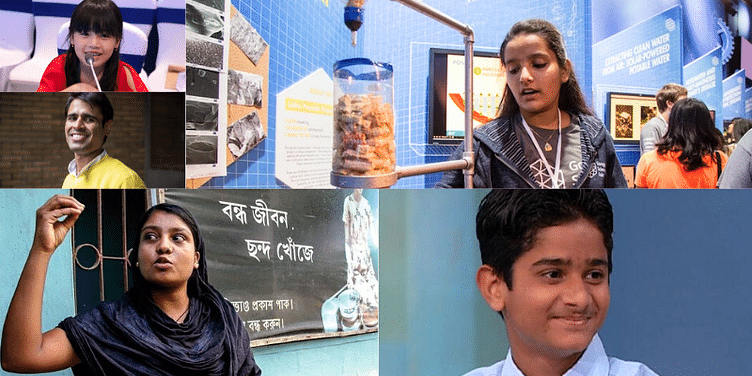 Be it 17-year-old Lalita Prasida in Odisha, who uses corn cobs to clean and effectively manage wastewater, or Om Prakash Gurjar, who is enforcing birth registration in Rajasthan's villages, these children believe change begins with them.

According to a study carried out by Sciencedirect, children and youth are the new changemakers when it comes to the environment, human health, safety, and education, and youth between the age group of 15 and 24 years can create maximum social change.

One usually associates childhood as a time for school, play, friendships, and being care-free, but there are some children who are striving to make a difference.

We at SocialStory, bring you the stories of five children who are making society a better place to live in.

Anoyara Khatun, a 21-year-old girl from West Bengal, had a challenging upbringing; she was trafficked as a child. Life was not easy, but she took that experience in her stride and has tried to ensure that other children do not undergo the same ordeal. An international child rights crusader, Anoyara today fights for the betterment of children in society. Her efforts have made a significant impact as she addresses issues like child labor, child marriage, and human trafficking. She frequently carries out informative sessions and awareness drives in her village on how to address and overcome these perils.

She was invited twice to speak at the United Nations, where she met Ban Ki-moon, the eighth Secretary-General of the United Nations, and Melinda Gates, who were inspired by her work. She even contributed to the ‘Every Woman Every Child’ movement launched by Ban Ki-moon in 2010, which aims to improve the health of children, adolescents, and women across the world by putting an end to all preventable deaths.

Through collaboration with ‘Save the Children’, she has been able to successfully prevent 35 child marriages, helped in providing education to over 200 children, and reunited 180 victims of trafficking with their families, reports Women of Courage.

“I want to advocate for children’s rights. The major problem is trafficking in the name of labour and marriage... I myself have been trafficked and I know how painful it is,” Anoyara told the Independent in an interview.

Seven-year-old Licipriya Kangujam is an inspiration for many.  A Class 2 student from Manipur, Licipriya is crusading for the prevention and management of natural calamities. Currently, she is working as a Child Disaster Risks Reduction Advocate in the International Youth Committee (IYC), New Delhi.

On the disaster management issue, she said, "I get scared when I see people suffering and dying because of earthquakes, floods, and tsunami on television. I cry when I see children losing their parents or people becoming homeless due to the dangers of disasters. I urge everyone to join their hands, minds, and passions to create a better world for all of us," reports Indian Women Blog.

She was invited in 2018 to the Mongolian capital, Ulaanbaatar, for the Asian Ministerial Conference on Disaster Risks Reduction. In early 2019, the United Nations asked her to attend the sixth session of the Global Platform for Disaster Risk Reduction in Geneva, Switzerland. The conference had over 3,000 delegates and participants from over 140 countries, reports Think Change India.

The 17-year-old from Odisha has developed a cost-effective method to clean wastewater using corn cobs. In 2015, Lalita won the ‘Community Impact Award’ at the Google Science Fair in Mountain View, California. Her purifier cleans wastewater by flowing through different layers of corncobs. This is a cost-effective and simple technique, which is useful to tackle contaminants in ponds, reservoirs, and water tanks. She was awarded $10,000 as prize money and is mentored by Google to build the project.

As part of the project, Lalita used waste corn cobs to purify water from domestic and industrial waste by applying the principle of adsorption. In her experiment, Lalita found that corn cobs are able to absorb contaminants like salt oxides, detergent, suspended particles, coloured dyes, oil, grease, and even some heavy metals.

“I like to visit the nearby villages and observe their lifestyle. Villagers’ lifestyles revolve around agriculture amd cultivating many varieties of crops. This developed an interest in me to focus on science and develop something new,” Lalita told NDTV.

From an Indian-origin professor developing 3D-printed living skin to a Mumbai startup cleaning ...

At the age of five, Rajasthan-born Om Prakash Gurjar was taken away from his family and made to work as a child labourer in fields. After being rescued by activists of Bachpan Bachao Andolan, he set up a network of child-friendly villages, Bal Mitra Grams, where child labour is banned completely.

The 27-year-old was awarded an international peace prize for his efforts towards children’s safety and welfare, preventing them from forced slavery, human trafficking, and forced child marriage.

Apart from this, Om Prakash has been constantly advocating birth registration in villages. He informs families about the importance of registration, as he did not want a single child to suffer on account of this. He shares with children and their parents stories of what he went through to inspire them to make a change.

Despite the obstacles Om Prakash faced, he continuously works towards enabling children in villages to have a good future, by encouraging them to pursue education. The social activist feels that this is the first step towards being better informed about the world.

Akrit Jaswal is the world’s youngest surgical doctor. The now 26-year-old performed his first surgery at the age of seven. The first surgery he performed was on an eight-year-old child whose fingers were fused together.

Akrit, who hails from Punjab, had a reputation of being a medical prodigy in his village and the girl’s family had heard about him. They approached him and he carried out the surgery on the child, for free.

The girl had suffered massive third-degree burns, and Akrit successfully separated two of her fingers and improved her quality of life for better, reports Medmaster.

He was acknowledged worldwide as a child genius following this procedure and was even a part of the Oprah Winfrey show.

At the age of 11, he was the youngest person in India to secure a position at Punjab University, where he aimed to pursue his medical journey and find solutions for cancer patients.He was invited by the prestigious Imperial College London to talk about his achievements, reports Mambee.