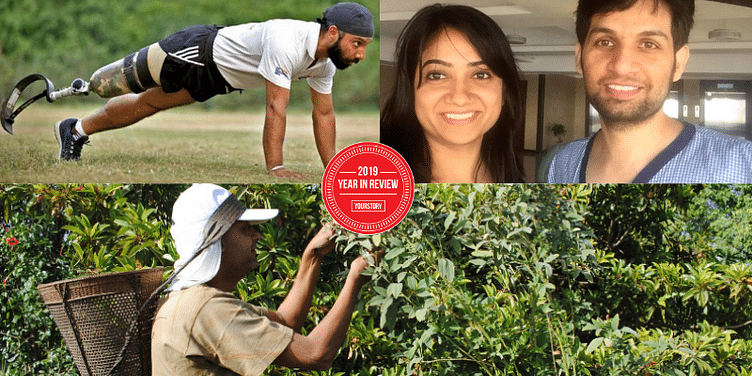 It’s easy to want change, not so easy to create it. In our Monday Motivation series, we bring you stories that will inspire you to work towards creating change, one step at a time.

It’s important to strive to be the change we wish to see in this world. These 10 individuals are spearheading change in their own unique ways. Sheer will and determination have helped them overcome hurdles, and their acts of courage and selflessness have inspired others to seize the day and conquer life in their own way.

From Dimple Parmar who launched ‘Love Heals Cancer’ to raise awareness about the disease after she lost her husband, to acid attack survivor Lakshmi Agarwal whose story of strength and perseverance has inspired the nation, SocialStory brings you our top 10 picks from our Monday Motivation series of 2019.

Meet the Chennai teacher whose lessons are not just on accounting, but life as well

Vijay Kumar, 49, has many a feather in his hat. He is the Chief Financial Officer at Sify Technologies, Council Member of the Institute of Chartered Accountants of India, and Member of SEBI Committee on Disclosures in Accounting.

With a natural inclination towards teaching, and an aim of giving back to the profession, Vijay believes CA has changed his life. Read how he is today helping the youth pursue their dreams by tutoring them in accounting and finance law.

After losing her husband to cancer, this IIM alumnus is spreading his message: Love Heals Cancer

Nitesh Prajapat and Dimple Parmar got married after they discovered that he had Stage 4 colorectal cancer.

They launched Love Heals Cancer in January 2018 to provide support, information, and services to help people in their battle against cancer.

The organisation was founded with a clear objective of increasing awareness about cancer and its prevention, along with helping patients get through the journey with someone always by their side.

Nitesh’s last wish was to give hope to everyone around him, especially the countless people diagnosed with cancer he witnessed through his own battle with the disease.

When Ruhi Danish Ashraf learnt of the requirement for a physics teacher in the government schools of upper Subansiri district in Arunachal Pradesh, she promptly decided to take on the responsibility.

There were only three government schools in the district, which were understaffed most of the time, and led to a drop in academic performance among the students. This gave her the motivation to take up teaching. Today, Ruhi has taught 94 students, and helped over 80 students pass the subject.

Back to the roots: how this techie-turned-farmer helped villagers embrace organic farming in Maharashtra

It's not easy for anyone to leave a high-paying corporate job and decide to do something noble for the welfare of society. Venkat Iyer, earlier a Project Manager at International Business Management (IBM), left his job in Mumbai in 2003 to do just that.

Venkat went to Peth, a village in Palghar district of Maharashtra, to learn to farm before setting out to help other farmers. For this, he started reading books about organic farming and learning farming techniques from the Internet.

After carrying out organic farming for five years, he gained the confidence to train other farmers in the nearby district of Vikramgad. He started training four Adivasi farmers, and now the number stands at 70.

Punit Batra, Aditya Ruia, Anuj Ruia, and Akshay Varma used to participate in beach cleanups in Chowpatti and Juhu in Mumbai. And they were shocked to see the amount of waste accumulated on the beaches, which inspired them to come up with eco-friendly products.

In 2017, they started Beco, which uses bamboo pulp and cornstarch-derived polymers to manufacture kitchen towels, trash bags, and tissue rolls. The bamboo kitchen towel can be washed and used up to 100 times, unlike a generic microfiber cloth, which is non-biodegradable.

Registered in 2018, the company states that it has so far contributed to removing 120 tonnes of plastic waste effectively from the garbage dumps.

Manish Gurwani, 27, was just like any other lad when he was at school and college, eyes brimming with enthusiasm and heart overflowing with passion. However, an aspect that set him apart was his conviction to contribute to the welfare of society.

Born and brought up in the small town of Nohar, Rajasthan, he had big dreams. His aim of bringing about a positive change in the society led him to achieve an all-India rank of 18 in the 2017 UPSC exam.

Manish had faced many challenges along the way, including his mother’s ill health and the fact that he had to learn English from scratch because he had no choice but to study in a Hindi-speaking school until Class 10. Through all that, he never gave up on his dreams.

Manish told SocialStory, “Just like any other IAS aspirant, I worked really hard. I used to study for six hours every day, and then gradually scaled it up to 10. But the only thing that kept me going through all my rough patches was the faith I had in myself.”

Chhapaak, the much-anticipated Bollywood movie starring Deepika Padukone, may give Laxmi Agarwal and her cause more visibility, but her inspiring crusade has brought hope to acid attack survivors, time and again, for a while now.

The movie is inspired by 28-year-old Laxmi Agarwal, a survivor of a brutal hate crime and acid attack, which has shaped her life’s mission - to help acid attack survivors find jobs, and lead independent and dignified lives.

In a conversation with SocialStory with her, we unfold the life of Laxmi and the moments that helped her beat the odds.

How Let's Feed Bengaluru is tackling hunger and starvation, one homecooked meal at a time

Harshil believes distributing food to those in need gives him an opportunity to serve people who are lesser privileged than him, and gives him a sense of self-satisfaction. Recognising his contribution, he was conferred with the title of Rising Star at the Namma Bengaluru Awards in 2017.

July 26, 1999. The date shall never be forgotten. Twenty years on Kargil Vijay Diwas, India celebrates the victory and sacrifice of its armed forces who fought back bravely against Pakistan to recapture its territories.

However, this victory came with a heavy price, as the country lost a large number of soldiers during the Kargil war. And one of our brave soldiers, India’s first blade runner, former Major Devender Pal Singh, lost a leg and part of his intestines in the Kargil war.

Only 25 years old when he was hit by mortar fire on a Himalayan battlefield, Major Singh was initially declared dead by the army surgeon at the field hospital, but was later revived. He was told his infected leg had to be amputated.

He served in the Army for 10 years, joining the 7th battalion in 1997. Upon retiring after his injury, he did not give up and started playing sports to train himself. Now he is India’s first amputee marathon runner and holds multiple Limca Records. Read more about the brave heroes from the Kargil War

Pulwama terror attack: Here’s how you can help the families of the CRPF martyrs

As India reels in the aftermath of the February 14 Pulwama attack, which claimed the lives of 44 Central Reserve Police Force (CRPF) personnel, citizens have come forward to help the grieving families through financial support, and assistance for the education of the martyrs’ children.

Organisations such a Life Insurance Corporation have processed the insurance money to the families without putting them through the hassles of paperwork, while Vistara airline has reached out to the Indian Air Force and offered travel assistance for all the family members of the martyrs.

At a time when India stands united in the face of terror, we highlight the organisations that are collecting donations and doing crowdfunding drives to assist the grieving families and help them in this tough time.