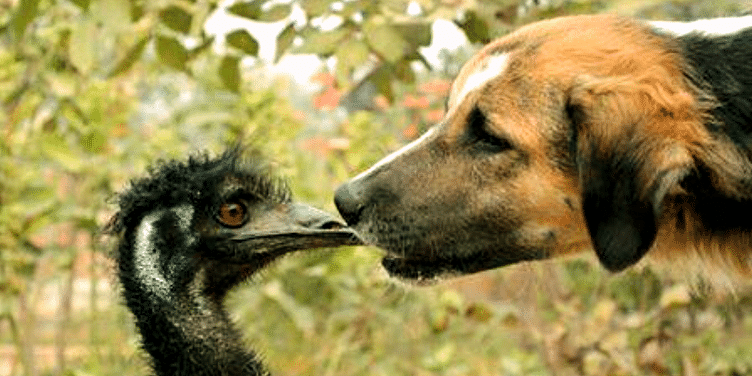 Haryana-based All Creatures Great and Small houses over 700 sick and disabled animals and gives them a second chance at life.

Nestled amid the lush green Silkhari village in Faridabad district, Haryana, is a 2.5-acre spread that is home to over 700 animals. It is a veritable barnyard ⁠— small-sized creatures such as rabbits, emus, and cats and bigger species of dogs, pigs, donkeys, and horses can all be found here.

Founded in 2012 by animal lover and activist Anjali Gopalan, NGO All Creatures Great and Small (ACGS) aims to give animals a place where they are protected and free from the cruelties of the world. It provides sick and disabled animals a safe sanctuary for a lifetime. Some of the animals even get adopted after being rehabilitated by the NGO.

Anjali’s work and efforts have been greatly noticed and appreciated.  Over the years, she has made her mark in animal rights activism as well as in other fields. She was acknowledged by Time magazine as one of the world’s 100 most influential people for her pioneering work on HIV/AIDs and LGBT rights in India.

She established the Naz Foundation (India) Trust, a HIV/AIDS service organisation that focusses on prevention and care, in 1994 and Delhi’s first HIV clinic in 1996.

She was also honoured as a Woman Achiever by India’s Ministry of Women and Child Development in 2007 as well as awarded the Chevalier de la Legion d’Honneur in 2013, which is the highest award from France for her work in the sphere of animal activism.

“My main goal through ACGS is to create an environment in which animals in distress can lead a life where they are nurtured, loved, and cared for. That’s what we want. It can be pet dogs that are abandoned, or accident cases, and animals that are blind or so old that they just can’t manage and have nobody to take care of them.”

The spark behind the shelter

Since her childhood days, Anjali was always surrounded by animals. Her grandfather, who she never met, was a veterinarian at the Madras Veterinary College, and her father who was in the navy always supported the cause of earth’s creatures. So, this care would seem inbuilt in her genes.

After her undergraduate studies from LSR in Delhi and postgraduate diploma in journalism and mass communications from the Indian Institute of Mass Communication, New Delhi, Anjali went on to pursue her master’s in intercultural management at Brattleboro, Vermont.

Growing up, Anjali would always have her father tell her, “Children who are not brought up with animals are less humane.”

Now, having worked with HIV children through the Naz Foundation for over twenty years, she has come to realise that, like humans, animals too need a place where they can heal and thrive. She always believed them to be man's equal, and it pained her to see the way they were treated in many circumstances.

The turning point came about for Anjali while she was volunteering for a year at a reputed animal shelter in New Delhi.  She was appalled at the way the animals were being treated, “as if the human beings in charge of their care were doing them a favour”.

“They were not fed properly due to the fact that they might excrete too much, and they were also not being walked or exercised regularly,” recalls Anjali.

To address this issue, which she realised was quite rampant, she started her NGO with the sole aim of providing quality care and making sure that no animal would crave for freedom. “I wanted to show that quality care of animals was possible,” she says.

She initially bootstrapped the NGO with about Rs 3 to 4 lakhs of her savings and an investment from her father.

Today, ACGS has garnered the attention of a number of donors. Sunil Kalra is one of the patrons on board; other supporters are the DLF Foundation and CGS Hospital. It has also partnered with ‘Paws for a Cause’ for animal adoption.

“Something I look for is a number of small donors with a large donor base, as they are usually into long-term commitments,” says Anjali.

With a 22-strong staff today, the NGO, named after the famous book by James Herriot, is making sure that animals are leading the life they truly deserve.

ACGS has established a process and a number of quality checks to ensure that all the animals are well looked after. It offers a number of different services for the animals.

The sanctuary: Animals are usually brought to ACGS, either by individuals who have found them or police officers who have witnessed accident cases firsthand. Once in a while, the NGO’s staff is called upon to collect them.

“Recently, there was a case where a Rottweiler was thrown out of a moving Mercedes Benz in Gurgaon, and I went to rescue the dog,” says Anjali.

The animals that ACGS takes in have either been abandoned by their owners, have been abused, are pet dogs castaway onto the streets, or are elderly and sick animals without a home.

Stating that there are a number of reasons behind animals getting abandoned, Anjali explains, “Often, people on realising that the animal needs care just abandon them. Other reasons include ‘we are moving away’ or ‘I have now got a child and I cannot look after both of them’.”

The clinic: ACGS has its own clinic where animals are treated and given immediate medical attention. They have vets on board who are consulted on a regular basis. They have also partnered with an ambulance service for animals in Haryana.

The clinic is well-equipped with facilities for minor surgeries, amputations, dressings, vaccinations, etc.

Through the clinic, animals at the sanctuary are provided regular check-ups. The clinic also provides care for animals in the surrounding villages. Regular de-worming, de-ticking, spaying, and neutering are provided to the animals in care.

Pointing out that all state governments are required to carry out an animal birth control programme, Anjali says that it is not happening at the desired level. “We decided to go ahead on our own steam and with our own resources to adopt the four villages around us. We have helped over 500 dogs till now. It’s an ongoing programme I feel very strongly about because there is no other way to deal with the dog-human conflict, other than to ensure that we control the dog population and that they are vaccinated on a regular basis,” she adds.

Food and nutrition: Providing animals at the sanctuary with a balanced diet is of utmost importance to Anjali. Food, she feels, is what keeps the animals nourished and happy. Organic farming is practiced on the property, and vegetables are provided to the animals.

Malnourished cats and dogs are provided with a diet that helps them regain their healthy weight. Each animal at the sanctuary has a well-tailored food plan, which the team adheres to.

For example, dogs are given rice, meats, vegetables, and eggs. Horses, goats, buffaloes, and donkeys are given fodder, vegetables, chickpeas, and chapatti, while birds like the emus are given millets, greens, and certain fruits.

Talking about the impact that ACGS has created for the benefit of the many animal species, Anjali says,

“I think that the biggest impact we have made so far in the lives of animals is the type of space we have provided for them.”

The NGO claims to have touched the lives of over 10,000 animals to date. Currently, ACGS houses about 460 dogs and about 100 large animals including cows, buffaloes, donkeys, and horses in the sanctuary. The team is also taking care of 15 emus and a number of other birds, fish, and turtles. Around 150 cats, 25 goats, and five pigs are also given care.

Being on the Animal Welfare Board of India, Anjali has focussed on bringing about an overarching change — not just for animals, but for humans too. She says,

“When someone gets infected with rabies, they die a horrible death because there is no cure for this and it is irreversible. So, we activists have been asking the high court to look at euthanasia as an option for human beings or a directive from the court asking doctors or healthcare professionals to provide care and sedation. I try to look at issues through a lens that considers every point of view as far as possible.”

Speaking of ACGS’s future plans, the founder shares that, though the NGO does not have any immediate plans, it is looking to expand in terms of the land space to take in more animals into the sanctuary.