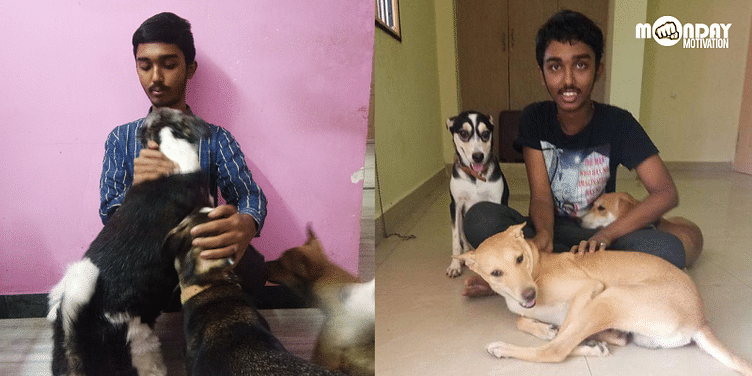 After rescuing numerous animals over the last couple of years, 18-year-old Sai Vignesh is now on a new mission: to give sick and abandoned animals a second chance at life by opening a shelter they can call home.

Seeing a stray animal may tug at our hearts a little, but few go the extra mile to give them a better life. Eighteen-year-old Sai Vignesh from Chennai has been a friend to hundreds of animals since he was a child, and is now building one of the biggest shelters in the city, across two acres of donated land.

So far, Vignesh has rescued over 300 animals, including dogs, cats, birds and cows. He has had over 900 dogs vaccinated and sterilised, and found loving homes for over 200 stray puppies and kittens.

Vignesh has also adopted 15 dogs that he cares for along with his parents. Over the years, he has also filed five legal cases against animal abuse, including an FIR against a dog poisoning incident at Cooum and a PIL (still ongoing) against abuse at a dog pound.

Speaking to SocialStory, Vignesh shares why and how he dedicates his time towards saving strays.

Vignesh’s love for animals came early in life, as he grew up with Bhairava, the family dog. He was heartbroken when his pet passed away just a few years into his childhood. To cope with the loss, he began feeding stray dogs around his house, and his compassion towards animals gradually increased.

As he grew older, Vignesh began helping more animals. In 2015, he started rescuing them on a large scale. Despite initial hesitation from family and friends who were worried that activism as a teenager might hinder his studies and social life, Vignesh put his love for animals above everything else.

In 2017, he started Almighty Animal Care Trust, an organisation that conducts rescues in a more organised manner, and is operated by like-minded volunteers.

Vignesh decided to build a shelter for distressed animals in March this year, after doing his own research.

“I have always dreamed of building a shelter for animals, but I didn’t want to start the project without experience. I analysed the process for a year, and gained experience through various rescue operations before beginning. We are now building separate enclosures for dogs, cats, farm animals, and birds. We will also be building an isolation ward where animals with contagious diseases can recover, because there aren’t many hospitals or shelters who take them in. We will also have a medical dispensary that stocks medicines free of cost,” Vignesh explains.

He adds that he has consulted a few veterinarians who are willing to help out. Vignesh’s family is also in the process of selling their ancestral home in Tirunelveli; some of the money will be used to fund the construction and other needs of the shelter.

Vignesh says he realised the dire situation of animals when Chennai was hit by Cyclone Vardah in 2016. While people were panicking about their own lives, Vignesh, then aged 16, rushed to rescue two helpless puppies that were left to drown.

Recalling the experience, Vignesh says: “I got a call in the middle of the night that two puppies were drowning. When I reached I could see the puppies yelping for help, but people were just watching. This was when I realised I had to do whatever I could to save stray animals.”

All in a day's work

As a student-activist Vignesh leads an intensely busy life.

“I wake up at 6am every day to feed my 15 dogs, and then I clean the house with my mother for the next three hours. The rest of the day, I take animals to veterinary clinics to be treated, and check on the animals I have already rescued to make sure they are being taken care of. If I get an emergency rescue call, I cancel all other appointments to go and help the animal,” he says.

At the end of such an exhausting day, one would expect him to hit the sack, but Vignesh only finds time to study between 10pm and 2am. Barely getting a wink of sleep, Vignesh does it all over again the next day. He also works as a part-time website developer, and funds his missions with the money he earns.

On what keeps him going despite the mental and physical toll his routine takes, Vignesh says,

“It might be tiring, but at the end of the day, I have made a difference in the lives of these animals. I have to be there for them because they don’t have a voice in our society.”

He adds that his parents have been incredibly supportive of his choices, and his father, a scientist, donates some of his earnings towards the cause as well.

Not a smooth ride

Although Vignesh’s love for animals breaks all barriers, not everyone understands it. His family has been forced to shift out of eight houses in just a few years, because the neighbours complained that the dogs caused a nuisance. Vignesh says a few of them even attempted to kill his dogs with poisoned food.

However, things improved after lodging complaints with the police, he says.

Although activism isn’t for everyone, Vignesh says everyone can help animals.

“You can do something simple like feeding them and keeping a bowl of water outside. You can also offer your compound as shelter when it rains or it’s very hot. It doesn’t take a lot to care for animals."

Vignesh thinks the first thing that should change when it comes to animal rights is the way cases of animal abuse are treated, because perpetrators are usually let off with a warning, or at penalties as low as Rs 50. He feels that the Prevention of Cruelty to Animals Act 1960 needs to be strengthened and amended.

To equip himself better, Vignesh also plans to pursue law in college. “It will give me more power to fight against animal abuse,” he says.

To those who frown at the idea of being kind to animals, Vignesh says:

“Being compassionate is not wrong. Although we are humans, we are not the superior species. We do have a responsibility to help other lives.”

On what can be done to improve existing mindsets, Vignesh strongly believes that there need to be more awareness programmes, especially for children, because they tend to be more compassionate towards animals.

“I ultimately aim to change people's mindsets about animals, make a difference in the lives of as many animals as possible, and strengthen laws concerning their rights,” Vignesh says.

The student hopes to gain support from the public to construct the animal shelter, and is running a fundraiser to raise at least Rs 10 lakh. If you feel strongly for the cause, donate here.

How women ragpickers from Ghazipur have turned into local artisans