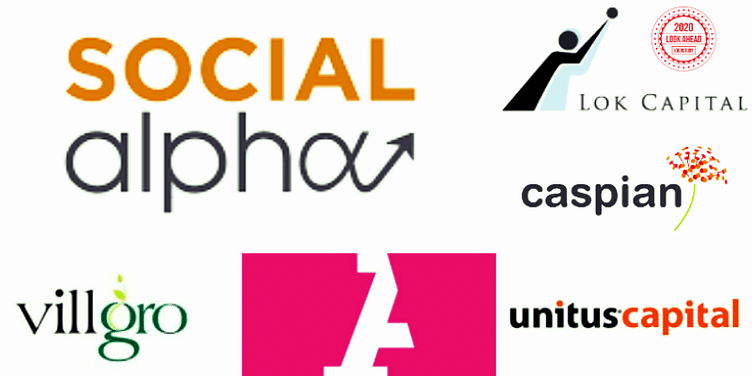 Unitus Capital is helping businesses by giving them access to capital to scale, innovate, and deliver deep social and environmental impact, while Villgro is helping some of India’s poorest sections of society.

Investing in the social sector is no easy task, but one that is the need of the hour.

Understanding the crucial nature of this space, companies and individuals are coming together to back important and relevant causes that need funds and added support.

From helping individuals start up in the spaces like clean energy, agriculture, healthcare, education, and financial inclusivity, venture capitals are becoming the new superheroes – saving the world one day at a time, and their efforts have not gone unnoticed.

SocialStory brings you seven social impact VC’s doing meaningful work over the last few years, and will continue to do so in 2020.

Based out of Hyderabad, and founded by S Viswanatha Prasad, ﻿Caspian﻿ is a certified B-Corp, investing in enterprises that address problems of access and efficiency in business ecosystems with positive social and environmental impact.

According to the firm’s website, its vision is "to utilise our understanding of early-stage enterprises that operate in this sphere and bring our capital and expertise to improving the outreach and viability of their businesses”.

Being one of the early entrants and leaders in the social space since 2005, they focus on areas like financial inclusion, food and agriculture, affordable housing, healthcare, and clean energy.

They have received a 5-star impact rating from the Global Impact Investing Rating System (GIIRS) and have a strong support network, having evaluated over 200 proposals in the past decade. Caspian has had three funds so far, and is in the process of closing its fourth.

Some of its investors and partners include USAID, Grassroots Capital Management, and Triodos Bank.

Founded in 2008 by Eric Savage, its primary headquarters are in Bangalore. Unitus Capital works in areas of affordable healthcare, renewable energy, education, women empowerment, and agriculture.

According to its website, “We are committed to mobilising capital for businesses that deliver sustainable, scalable social impact. We see what we do as having the ability to elevate the base of the economic pyramid and to eliminate the poverty penalty.”

Unitus Capital was ranked #1 investment bank by deal volume for the first half of 2019 by Venture Intelligence.

In the past, it has partnered with LeapFrog, Morgan Stanley, Gray Matters Capital, and First Light Ventures.

Founded in 2001 by Vineet Rai, Aavishkar is based out of Mumbai and is an early-stage investing company.

Its vision is to catalyse the development in the underserved regions of India.

“Aavishkar is driven by the belief that an ‘enterprise’ based development approach can enhance livelihoods and reduce vulnerabilities for the low income population."

It identifies competent entrepreneurs, provides them with capital, and helps them build a sustainable enterprise.

Aavishkar works with a number of sectors including agriculture, dairy, education, health, water and sanitation, handicrafts, and technology for development, microfinance, and financial inclusion.

The firm has invested in companies such as ﻿Milk Mantra﻿, ﻿Agrostar﻿, ﻿Ergos﻿, The ﻿Karadi Path﻿-Education Company, Water Life, Nepra, 3SIndia, Mandala Apparels, ﻿Mela Artisans﻿, ﻿Vaatsalya﻿ Healthcare, and MeraDoctor amongst others.

While 94 percent of its portfolio companies have rural and semi urban markets as their main focus, 21 have a strong presence of women board members.

One of India’s oldest social enterprise incubators, Chennai-based ﻿Villgro﻿ was founded by Paul Basil in 2001.

Speaking about Villgro’s vision on its website, the Founder writes, “The power of innovation combined with entrepreneurship, to impact the lives of people who are poor."

What stands out about Villgro is the fact that the firm doesn’t focus on the ‘traditional’ form of charity, taking a more sustainable approach instead where the poor and marginalised are stakeholders in their own growth.

Some of its portfolio companies include Raav TechLabs, ﻿Multibhashi﻿, Oorja Solutions, and Artoo. Villgro works with enterprises in sectors like health, education, agriculture, and energy.

Headquartered in Bengaluru and founded by Manoj Kumar in 2016, Social Alpha aims to bring about a positive change in the social sector through science and technology innovations and entrepreneurship.

It has incubated around 51 startups, invested in 30, with $275 million committed capital.

Social Alpha is a not-for-profit platform with sponsors including Tata Trusts, the Government of India, and a number of academic, philanthropic, and corporate partnerships.

Companies it has helped incubate in the past include Blee, ﻿Bionic Yantra﻿, FarmVeda, ﻿Sistema bio﻿, ﻿Battery Pool﻿, and ﻿Tactopus﻿ to name a few.

Lok Capital was co-founded in 2004 by Donald Peck, Venky Natarajan, and Vishal Mehta. As a venture capital firm, it has a strong on-ground presence and operational experience that allows them to make long-term equity investments and provide management support to partner investees.

Based out of Chennai, Lok Capital aims to provide inclusive growth while generating market returns.

It partners with companies across a wide range of backgrounds and disciplines that have proven execution ability, innovative ideas, and a strong commitment towards providing viable solutions.

It focusses on areas like agriculture and livelihoods, healthcare, and financial inclusion.

Acumen Ventures, founded by Jacqueline Novogratz in 2001, aims to address the issue of poverty across multiple regions, with offices in New York, San Francisco, East Africa, London, and India, to name a few.

Its vision “is a world based on dignity, where every human being has the same opportunity”.

For this reason, rather than giving just giving away money, it invests in companies and changemakers, which statistically have the greatest chance of lowering poverty.

Since 2016, its main focus are on clean energy, education, agriculture, and healthcare.

It has invested in organisations like Aarusha Homes, Asian Health Alliance, and Guardian.

The launch of the ‘lean data’ programme by Acumen has been extremely successful at understanding how the companies’ investments have been impacting the lives of low- income groups.

Here are some honourable mentions of venture capitalists and firms that are investing in companies working on creating deep social impact, including Baytree, Menterra, and Infuse Ventures.