How this organisation is helping farmers, tourists follow sustainable livelihood practices in the Himalayas 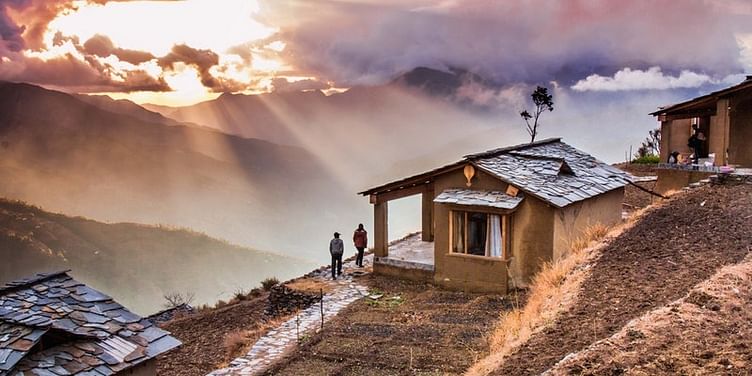 Uttarakhand-based Green People is working towards a new blend of agro-tourism, eco-tourism, and rural tourism, and is looking to bridge the gap between urban and rural India through initiatives like ‘Bakri Chhap’ and ‘The Goat Villages’

An unfortunate aspect of our development has been the growing rural-urban divide. This has resulted in young people leaving agriculture and migrating to cities for jobs and better income. While it is a vicious cycle, this continuing trend ultimately leads to forgetting our old traditions of farming and associated practices.

With an aim to revive old farming techniques and to let people of the hills take up occupations that are gradually becoming redundant and stay connected to their roots, Green People was founded by Roopesh Rai in 2016,in Garwhal district of Uttarakhand, a sub range of the Himalayas.

The organisation is working towards a new blend of agro-tourism, eco-tourism, and rural tourism, and aims to bridge the gap between urban and rural India with two new initiatives – Bakri Chhap and The Goat Village.

“We started with the purpose of ushering in sustainable social and environmental changes in India,” says Roopesh.

While ‘Bakri Chap’ is creating a brand for farmers in Himalayan villages by providing them a source of livelihood, ‘The Goat Villages’ is a chain of farm retreats and homestays promoting sustainable living practices among visitors.

In less than three years, from 1,200 trekkers/visitors per year, Green People has managed to get more than 54,000 visitors, resulting in the activation of many community-run homestays and getting free insurance and vaccination to 5,000 goats.

For its efforts, the organisation has bagged the Gold Award at the prestigious Indian Responsible Tourism Awards (IRTA) in 2019, and WhatsApp International shortlisted Green People among the few impact business organisations in the travel and tourism space.

Roopesh Rai is an alumnus of Sainik School, Lucknow; IHM Bhopal, and SP Jain Mumbai. He has been a part of the hospitality and tourism industry in the past, and has worked with intercontinental hotels like the Taj Group of hotels and Thomas Cook in senior sales and marketing roles.

It was in 2013 that he first went to Uttarakhand as a trade-observer to the disaster-stricken site of Kedarnath. It was one of the biggest calamities in India in terms of scale and magnitude that affected the entire Himalayan region. Here, Roopesh witnessed rotting dead bodies, crumbled buildings, and the damage was so huge that it affected him to an extent that he quit his well-paying job to do something about this.

“Bumping into a local person, an army officer, who was working for Kedarnath restoration, Roopesh realised that easy money had been making people lose the relationship with their soil. People were leaving their age-old professions to make lodges and hotels. They had began buying vehicles to cater to this unexpected tourism footfall in the name of pilgrimage. All this eventually led to a plan to create a model, which differed from the conventional tourism model with a farming flavour,” recalls co-founder, Mani Mahesh.

Mani was a radio jockey and worked previously with The Times of India, Delhi, as the multimedia head for their website. It was during a sabbatical period, a year of self-reflection and extensive travelling that he came across Nag Tibba, and decided to volunteer. He was amazed by the local farm practices, and it is here that he first met Roopesh, who encouraged him to come on board and co-found the Bakri Chhap vertical.

Roopesh bootstrapped $0.7 million (Rs 5,00,00,000) across all units. “The total investment had been either self-funded, personal borrowing from friends and family, and profits reinvested into the entity spread across various phases and stages of our evolution,” recalls Roopesh.

Some of the other partners include local sleeping partner Ret Col. Ajay Kothiyal at the corporate level and various other unit level/ profit centers partners including Jagmohinder Singh, Bandana Rai, Mukesh Gaba, and Gorki Chandola.

Growing at a rate of 25 pc Y-o-Y, India hosts more than 450 startups in Agritech sector: report

The co-founders discovered that farmers in the Himalayan region were leaving their agricultural lands as they were not getting good price for their produce. Many times, the farmers had to go through middlemen before it reached the consumer. To fix this, the organisation stepped in to provide an adequate solution.

They started Bakri Chhap, which is a health and social-impact driven FMCG brand striving to make traditional farming practices profitable for the marginalised farmers. It provides them with income as well as helps them sell their produce.

The organisation claims that farmers also no longer have to go through the middlemen. It has come up with collection centres, whereby items are provided directly to the farmers at their doorstep and the produce is collected from them directly.

The farmers have a sustainable approach and follow environmental-friendly methods to grow crops. They use all natural ingredients and have been trained by Green People on the importance of upcycling plastic.

A lot of pulses are now grown in the local farms using natural irrigation and traditional farming techniques.

“We work with nearly 120 farmers directly and over 500 farmers indirectly in over 35 villages. The portfolio comprises of almost extinct indigenous varieties of cereals, pulses, honey, and millets, predominately coming from mid Himalayan altitudes. Due to this newly found market linkage, the villagers are shifting from mono-cropping to diversified and traditional/ indigenous crops and horticulture, which are conducive to the landscape and the region’s micro-climate and biodiversity, and require least intervention with irrigation,” says Mani.

Apart from this, the guests coming to The Goat Villages are also buying the Bakri Chhap produce. It is also being vouched for by some well-known chefs and wellness experts.

The Goat Villages, started initially in Nag Tibba, a peak in Uttarakhand, is a chain of retreats and homestays managed by the Green People.

Started in early 2015, the Goat Village project took a year to become fully functional. Here, one can learn about goat farming as well as how to lead a more sustainable and environment-friendly life.

The Goat Village homestays are located in Nag Tibba, Dayara Bugyal, Kanatal, Pangot, Bastadi, Kumali, Thati Dhanari, and Urgam Valley of Uttarakhand. Here, all the sources of renewable energy are utilised. The food provided to the guests are cooked with vegetables grown by the local farmers, it makes use of solar energy to light up the space, and even hot water is availed through renewable means.

Speaking about some of the chefs and wellness experts who visited The Goat Village, Roopesh says, “They told us the indigenous millets and pulses being cultivated in these high altitude farmlands are largely based on permaculture, which is the new rage, and are being considered as super foods. The collective feedback from our travellers culminated into the birth of our FMCG vertical/ brand Bakri Chhap.”

Speaking about overcoming some of the initial challenges, Roopesh says: “We decided not to lose the sight of forest in counting the trees. We quickly realised that rather than preaching the communities, a robust business model providing market linkage to their farm produce and tourists in their homestays will be adopted quickly by the communities in no time and will become the foundation of our success.”

Since its inception, Green People claims to have provided free insurance and vaccination to over 5,000 goats, and is providing aid in breed improvisation of goats by gene pool evolution (Bakri Swayamvar).

It has also been instrumental to increase the footfall in a lesser known lower sub Himalayan trek of Nag Tibba, resulting in the activation of more than 109 community-run homestays.

Speaking about future plans, Roopesh says: “I am in the process of creating a core founding team for our two new ventures Hideouts and FAB through an ecosystem of volunteers by funneling down the right talent pool.”