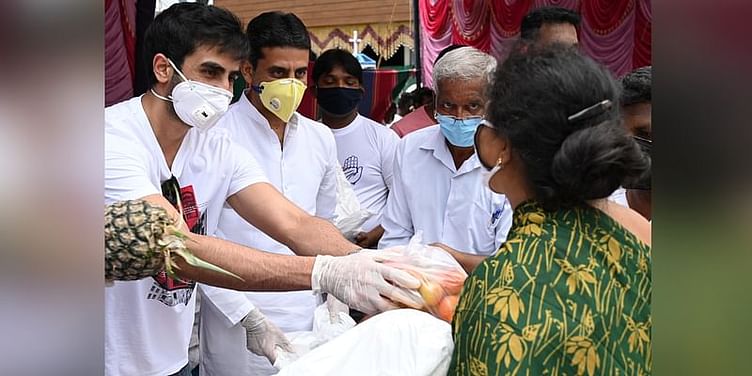 From pledging money to various relief funds, distributing PPEs and food, to working on the frontlines to help law enforcement agencies in the lockdown, India’s startup ecosystem has been stepping up to help out the government and citizens since the threat of COVID-19 escalated in the country.

Nikhil and Nithin Kamath, Co-founders, True Beacon and ﻿Zerodha﻿, are also doing their bit across the board — be it pledging funds, delivering meals or distributing PPEs. Together, the brothers have pledged Rs 25 crore across initiatives to fight COVID-19. This includes funds to the various relief funds, including those providing medical equipment for healthcare workers, supplying meals and ration to the poor, etc, as well as the Action COVID-19 Team (ACT) fund set up by the Government of India.

Chief among the initiatives is a meal supply drive in Bengaluru, in association with the city police.

“At present, we are providing 11,000 hot meals daily to the migrant workers and the poor, with a huge demand from the slums of Baiyappanahalli and Ulsoor. We reached out to the Bengaluru city police for help in identifying areas and delivering the food. And they have been phenomenal,” Nikhil tells SocialStory. Over the last few days, they have also expanded their delivery in the Bangalore South constituency and hope to increase the radius even further.

The food is freshly prepared in the kitchens of Smally’s Resto Bar — the restaurant chain the brothers have invested in. Each packet of food weighs 750 gm and contains hot food like dal-rice, pulav, sambar-rice, etc.

Unlike ration and other essentials, hot food comes with a short shelf life, making its timely delivery important. “The food gets cooked at the Smally’s Kitchens and is delivered to police stations of Baiyappanahalli and Ulsoor by the restaurant staff and delivery boys. The cops then distribute it in the slums,” says Nikhil.

Nikhil himself is often at the frontline of distributing the food packets in the slums, assisting the police personnel. “The demand for food is huge. If you go into one of these slums with say 5,000 packets of food, there are 15,000 people who are hungry and need it. What we are doing is probably not even enough for 1 percent of the people in need,” he says.

While the state government initiatives for free ration have helped a large number of people, migrant labourers and people without yellow ration cards are often left hungry. The meal delivery system aims to feed them, Nikhil explains.

The brothers also distribute ration and PPE kits. So far, they have sourced and distributed 1,500 PPE kits to health workers in BBMP hospitals. “The economics and quality of the equipment are important. Right now, it takes about Rs 1,000 per PPE kit. We are now in the process of sourcing some at a lower price but better quality,” says Nikhil. Two weeks ago, the brothers also organised a ration distribution camp in association with the MLA and local authorities in South East and North East constituencies of Bengaluru. The packets contain rice, dal, cooking oil, soap etc.

While the lockdown is slowly easing out for certain businesses, it’s going to take a long time for people who have been severely affected by the economic downturn to recover. Nikhil hopes to keep perfecting and scaling their current initiatives to allay their struggles.