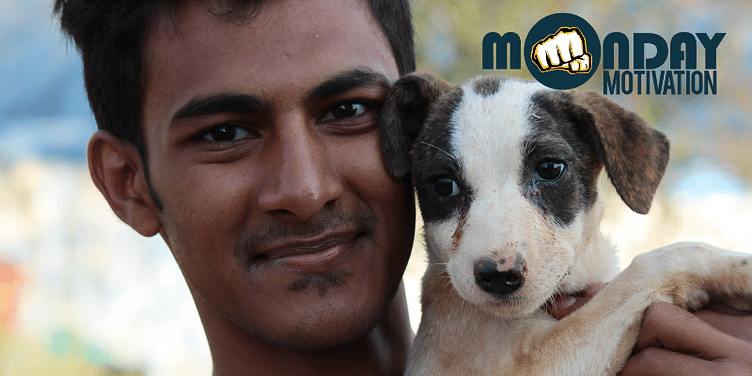 Haris Ali, a Bengaluru-based animal rescuer and entrepreneur, started Sarvoham Welfare Trust to rescue and rehabilitate injured dogs from across the city.

As a 12-year-old, Haris Ali loved taking care of a little family of dogs near his home – a mother with a litter of three puppies. With his daily pocket money of Rs 2, Haris would buy a small pack of biscuits and feed this canine family.

However, the boy witnessed a tragic incident, where one of the puppies was beaten to death by his neighbour. “The horrible event shook me hard, but as the years passed by, I began to forget about that incident,” Haris shares with SocialStory.

“On December 31, 2016, many years after that incident, I came across a dog that was foaming at the mouth, looking very ill. Despite the many calls to NGOs and hospitals, nobody turned up. After waiting for about an hour, I built up the courage to take him to the hospital myself,” he says.

He continues, the veterinarian revealed to him that the dog was suffering from canine distemper, which is contagious among the species. At that point, while he was concerned about where to take the dog for treatment and shelter, to his luck, two women stepped forward to take care of the dog and provided medication.

That night’s effort of reaching out to people culminated in Haris getting added to a WhatsApp group, where people would share information about injured or ill dogs that needed help.

He took it upon himself to rescue these dogs as and when the requests came. He would either admit them to the hospital or take them to the animal shelter CUPA (Compassion Unlimited Plus Action) in Bengaluru city.

“This was a real challenge for me as my entire day would be spent in travelling from south Bengaluru to north Bengaluru, through the city’s infamous traffic. I realised that this was not feasible, and things needed to be more timely when it came to such rescues,” he says.

Hence, in 2017, he started a shelter in a small room, and he saw about 20 dogs coming in on the first day itself. Once he got used to carrying out rescue operations successfully, he shifted the shelter to a bigger plot in J.P. Nagar to accommodate the rising number of dogs. Thus, Sarvoham Welfare Trust was born.

On a plot of about 12,000 sqft, Haris runs the Sarvoham shelter, which has about 25 kennels and a clinic that also performs surgeries and treatments. The trust also has a small staff quarter for the members to reside, a storage room, two administrative offices, and a puppy ward to house any surviving puppies.

It also runs two ambulances to rescue dogs from across the city. The trust also has a big open space for the dogs to play around, who have been part of this shelter for a long time.

At present, the shelter houses about 170 dogs. Every time Sarvoham rescues a dog, it ensures that they are neutered and spayed on time, given that they are healthy enough for the surgery.

“The shelter has several dogs with different kinds of diseases. Newborns are very susceptible to these diseases, reducing their chances of survival. In fact, we have rescued pregnant dogs where they’ve had a litter, but the puppies could not make it. Hence, the strict no breeding rule,” says Haris.

When a new dog joins the shelter, it is provided medication, treatment, rehabilitation, physiotherapy, and even bed/cage rest, depending on their situation. It also adds wheelchairs to their hind legs to support the paralysed ones. At present, it houses a 14-year-old dog who has been on bed rest for about two months and still hasn’t given up!

In many cases, the volunteers hand-feed the dogs who have hip fractures and are not in a state to eat by themselves.

Sarvoham primarily helps dogs that need immediate doctor’s attention — those suffering from accidents, diseased dogs, and abused dogs. When it comes to the abandoned dogs, Haris says, the major challenge is finding them a home.

“While we used to take in these dogs earlier, some of them are still here with us without a home. And, there are people who still abandon some of them at the gate. In such helpless situations, where it is no fault of the dog’s, we still take them in,” Haris claims.

To date, Haris and Sarvoham Welfare Trust have rescued over 2,000 dogs from across Bengaluru city.

Apart from being an animal rescuer, Haris is also an entrepreneur, and has founded a cybersecurity firm called ‘Orcaza Cybersecurity.’

Sarvoham had been getting its funds through this startup for the past three years. However, due to the COVID-19 pandemic, the office shut down temporarily and funds also stopped coming in. During the lockdown, most of the funds came through crowdfunding campaigns on ﻿Milaap﻿. Sarvoham was able to raise about Rs 10 lakh from these campaigns.

Moreover, it also received funds and machinery and infrastructural support from Infosys.

Haris says that being surrounded by these dogs is very uplifting as none of these inmates is depressed about their disabilities.

Choti, one of the dogs at Sarvoham, has about eight fractures in her body and has been fighting for her life for the last two years. However, she manages to stand at the forefront of any fight, loves to eat, and has a lot of love to share.

“Another dog, Kaalu (most of our black dogs are called Kaalu), had a nerve compression in the hip area and couldn’t keep his hind legs straight. I really thought he wouldn’t make it through, but he happily wobbles around the place,” Haris laughs.

Like these two, there have been dogs with even more severe injuries, including acid attacks. However, these furry friends are happy to stay with the family of Sarvoham and manage to stay positive and energised at all times.

The bumps in the road

According to Haris, one of the biggest challenges is the insensitivity of people towards these animals, who often face the brunt of their actions. What makes matters worse is people report such cases late, or completely ignore such ailing dogs.

“Another problem is, there is a group of animal haters who don’t want anything to do with stray animals. They often pick fights and create problems for us,” Haris shares.

Besides, the lack of animal care from the government’s end poses a big problem. Dogs are not timely vaccinated and sterilised, which puts the rescuers at risk. Moreover, whenever there is a case of animal cruelty, the fines are menial, making it easier for offenders to escape accountability.

In a first, sniffer dog ‘Ruby’ from Chhattisgarh awarded ‘cop of the month’

The coronavirus pandemic also gave its fair share of problems. Before the pandemic struck, Sarvoham had about nine staff members and about 20 volunteers. But with the lockdown, Haris was down to just three staffers, which resulted in minimum rescue operations.

From rescuing four to five dogs a day, Sarvohan was rescuing about 20 in a month. This was also because Haris didn’t want anybody to be at risk.

However, Haris has not lost hope. Talking about the way forward, he says, “In the next five years, we would expand our services for the welfare of other stray animals, including cows, buffaloes, and other cattle.

“We also hope to end cruelty, and conduct more awareness campaigns around the laws that exist for animals,” he signs off.