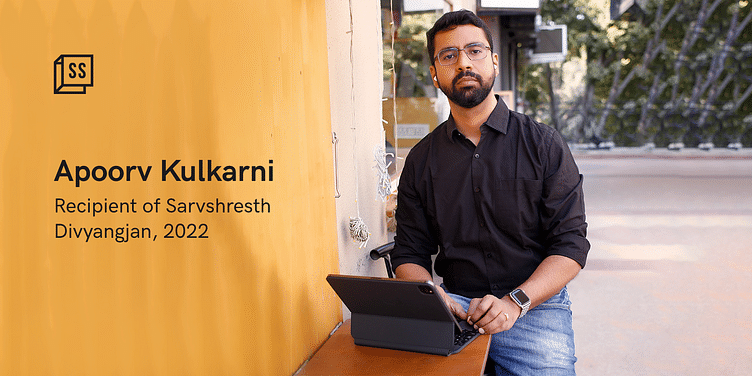 Apoorv Kulkarni is a recipient of this year’s Sarvshresth Divyangjan, the highest individual category under the National Awards for the Empowerment of Persons with Disabilities. This is his journey.

The decline happened gradually, and yet came as a surprise for the seven-year-old and his folks when they realised why he was slipping at school. Apoorv Kulkarni was progressively losing his vision, but that hadn’t been evident. He could still carry on with his routine, but struggled to make out words or numbers in his book or what his teachers were writing on the board. He was a kid. To grownups, it seemed like a bluff.

The eventual diagnosis, after multiple visits to doctors and ophthalmologists, was Stargardt disease. It is a genetic condition that affects the retina, not making people blind, but severely impairing vision. The loss is often gradual, and for several, begins in childhood or early adulthood.

Apoorv’s routine changed. He had to rely on others to read to him, write his exams, and even slow down for him. On the playground, as other kids began casting him aside, he gravitated towards climbing trees, rollerblading, and cycling.

“It was a lot to take as a kid,” he says over the phone from Delhi, barely betraying his excitement over the agenda set out for him for the next two days.

“But the ignorance and childish enthusiasm worked in my favour. Because you don’t process everything (at that age), you don’t understand the full magnitude of what life has to offer in the context of something like this.”

So, without much fuss, as with several kids forced into abrupt and restrictive lifestyle changes, Apoorv learned to cope, work ‘extra’ hard, and build new muscles. He soon encountered life-altering technology others take for granted. He, or his parents, would rip out and scan hundreds of pages from textbooks, and feed that into an optical character reader so a software could then read out the pages to him.

That freed him up, delivering some degree of independence. “I discovered that technology can help you multiply the impact of any effort,” he says.

Apoorv has since made a career of figuring ways to make everyday technology work for persons with disabilities, as well as coaxing policymakers to think inclusively.

Nearly 30 years since he realised he was losing vision, that obsession has brought him peak recognition. Apoorv Kulkarni, now 35, has been selected to receive the Sarvshresth Divyangjan from President Droupadi Murmu on December 3, the International Day of Disabled Persons.

Apoorv currently leads research and is also the head of the Centre of Inclusive Mobility at OMI Foundation, previously Ola Mobility Institute, a policy think-tank specialising in mobility and social innovation.

As part of the wider organisation, Apoorv has also contributed to making Ola’s ride-booking app more accessible and safer for persons with disabilities, while also working with the HR department on inclusive hiring.

Apoorv has also authored a report titled ‘On The Move’ on the travel experiences of persons with disabilities, peer-reviewed by experts from the World Bank.

“It was pioneering research and gave a lot of actionable insights to policymakers to make improvements. It gave recommendations not only on near-term fixes but also systemic fixes, right from data collection to establishing centres of excellence, and mainstreaming some of these things in their larger policy discourse.”

Another intervention Apoorv recalls has to do with ensuring access to travel concessions offered by various governments to specific beneficiaries. “You have travel concessions for the elderly and for the disabled. But the way it was administered was very strenuous because it breaks down at two levels. One, people who are beneficiaries have to negotiate (to avail the benefits). It’s a humiliating experience. And many people (who are beneficiaries) don’t know that they’re entitled for travel (concessions).”

The other issue is that departments that are to administer such schemes typically end up waiting ages for the government to transfer the money for it. So implementation suffers.

“We developed a technology solution using India Stack that digitalises this entire process,” says Apoorv. “On a per-ride basis, a traveller is able to pay for a ride in a dignified way. The subsidy transaction happens in the backend. The operator gets their money and there’s no financial burden on the beneficiary.”

Apoorv’s team is now working with the Union Ministry of Housing and Urban Affairs and the National Smart Cities Mission to pilot this solution in a few cities before rolling it out nationwide.

For all this, Apoorv struggled as a person with disability to land his first job, even as a Chartered Accountant with an MBA from Stanford University. “I interviewed with a variety of companies, multinational and Indian.

But people were less curious about my qualifications and more curious about how my disability would be an impediment for me in doing my work and, therefore, probably be a liability for the company,” says Apoorv, also an avid cyclist and marathoner. “They were not seeing me for my abilities.”

With new tech, Apoorv says, even well-meaning folks need to shift efforts from creating one more organisation to teach persons with disabilities to make candles or weave baskets, to one providing digital skills.

But makers of new tech too need to be sensitised on how people with disabilities can interact with their products. “How do you make it sensory supported? How do you build in systems and redundancies to let all people interact (with your tech)?”

Accessibility considerations need to be weaved in at the concept or design stages as new tech emerges, he says, also because it becomes way more expensive to modify digital platforms retrospectively.

“As Web3 is being built… there is a lot of hope. But the problem that can occur is very similar. When these solutions are built, if you’re not thinking about how someone with a disability or with limited functionality is going to interact with it, you’re going to lock them out of the economy,” Apoorv says. “And by extension, you’re going to limit their potential to create value. But at the same time, you will also be limiting the number of creative ways in which people can use these platforms.”

“It works both ways, right? And that’s why it’s important.”

In a first, Hyderabad has a petrol pump run by former women prisoners