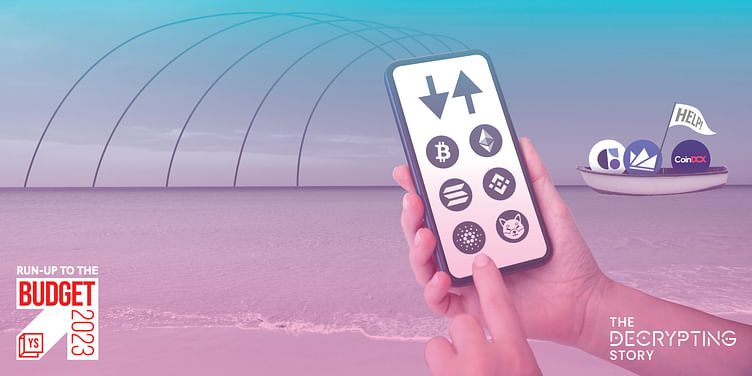 Under the current crypto tax regime, Indian crypto firms are losing out to their international counterparts. In the leadup to the Union Budget, industry leaders are calling for improvements to last year’s Web3 regulations.

All crypto assets would be classified as virtual digital assets, and income from their transfers would be taxed at 30%. Further, an additional 1% tax would be deducted at source on all VDA transactions. And finally, any loss from the transfer of VDAs could not be set off against any other income.

With these measures in place, Indian crypto exchanges such as ﻿WazirX﻿, ﻿CoinDCX﻿, and ﻿CoinSwitch﻿ lost a major share of trading volumes to international exchanges such as Binance and Coinbase, which do not have to comply with India-specific crypto regulations.

In fact, Indian exchanges lost $3.8 billion between February and October 2022 in trade to foreign exchanges, according to a report by thinktank Esya. It added that ﻿Binance﻿ and ﻿Coinbase﻿ held 67.6% of the volumes in India, up from 50% in November 2021.

Now, as the Indian government prepares to unveil its Union Budget for fiscal year 2023-24, India's crypto and Web3 sector is pitching for improvements to last year’s regulations.

In particular, some industry leaders are calling for the classification of VDAs as a regulated asset class, the repeal of the 1% TDS rule, and the ability to set off or carry forward losses in VDAs.

Rajagopal Menon, Vice President of the Indian cryptocurrency exchange WazirX, believes that VDAs should be classified as a separate asset class with tax slabs and set-off benefits similar to those applied to securities.

"Securities are classified as an asset class based on the risks associated with them, with products ranging from low-risk government bonds to high-risk derivatives," Rajagopal told The Decrypting Story. "As a result, VDAs should be appropriately classified and regulated so that investors can understand the associated risks and invest accordingly.”

Menon also highlighted the negative impact of the 1% TDS on sale transactions, insisting that this should be abolished or repealed.

"This tax causes investors to lose capital with each trade and discourages prospective investors from participating in this market," he said. "The current tax slabs will only discourage and deter traders with a risk appetite from dealing in VDAs."

"Volumes of VDA exchanges in India have suffered significantly after the introduction of TDS at 1%, but Indians’ interest has remained largely unchanged," he said.

"Indian exchange volumes have fallen by nearly 90% while Indian users’ adoption of foreign exchanges has seen a massive rise. The high rate of TDS, which was introduced to track the movement of crypto assets, has only pushed transactions offshore."

Malhotra suggested that a suitable amendment of the policies, such as a lower rate of TDS at 0.01%, would not only boost the sentiment of the industry but also meet required regulatory requirements.

He also emphasised the importance of allowing the offset of losses in VDAs, similar to that for traditional assets as stocks, gold, and bonds.

The best Web3 Indian startups we covered this year

Policies to promote Web3 use cases

A 2022 NASSCOM report found that 60% of Indian Web3 startups registered outside the country, but hired tech workforce domestically. Further, 11% of the global Web3 talent is in India, and growing at a fast rate, it added.

To tap into this potential and foster more Web3 startups locally, the crypto sector in India is looking for a more innovation-friendly regulatory environment for Web3 in the upcoming Union Budget.

"As a rapidly evolving asset class, VDAs require a different approach to regulation that is more in line with the digital age we live in," Rajagopal said.

﻿Colexion﻿, an NFT marketplace and ecosystems, is calling for the government to establish a clear legal framework for boosting use cases of blockchain in the country.

"The Indian government should create a framework for the secure and efficient use of blockchain technology, which can be used in various industries such as finance, healthcare, and supply chain management," said Abhay Aggarwal, CEO and Founder, Colexion.

In addition to this, other industry leaders in the NFT segment have highlighted the need for clear policies for different types of crypto assets under the wider gamut of VDAs.

“It would also be a welcome move if different classes of digital assets are put into different tax brackets,” said Ramkumar Subramaniam, CEO and Co-Founder, ﻿Guardian Link﻿.

"Some virtual assets are extremely volatile, and they might steadily increase or decrease in price. Some of them, however, might only see a gradual increase in their value, and it might not be appealing for investors to put both of them into the same tax bracket."

Exodus of talent and ambiguity around regulation of VDAs are typically identified as some of the weaknesses of India’s crypto sector.

Industry players believe that clear and progressive regulations will not only address these weaknesses but also help avoid black-swan events such as the collapse of FTX.

“A progressive regulatory framework will address ongoing concerns and uncertainty about the industry by creating transparency and help industry players to protect users," said Rahul Pagidipati, CEO, ﻿Zebpay﻿. "It will also encourage innovation to transform existing businesses through blockchain technology as well as build newer solutions for the industry to thrive further.”

Some other founders echoed Pagidipati’s sentiment, emphasising that Indian regulation should not hamper Web3 innovation.

Pratik Gauri, Co-founder and CEO at sustainability-focussed protocol ﻿5ire﻿, believes regulations should treat blockchain innovation as a source for value creation, and not merely value-capture.

“Any monumental shift caused by Web3 will be the world shifting from a value capture economy to a value creation economy," he said. "This will require a new set of rules that democratises access to resources for creators and makes value creation as rewarding as capturing value. This means a direct relationship between the human capital and the consumers of its creation.”

For all such Indian founders and startups using blockchain technology, it is becoming imperative for taxation regimes not to hamper the development of India’s talent in Web3, and the innovations and disruptions that come along with it.