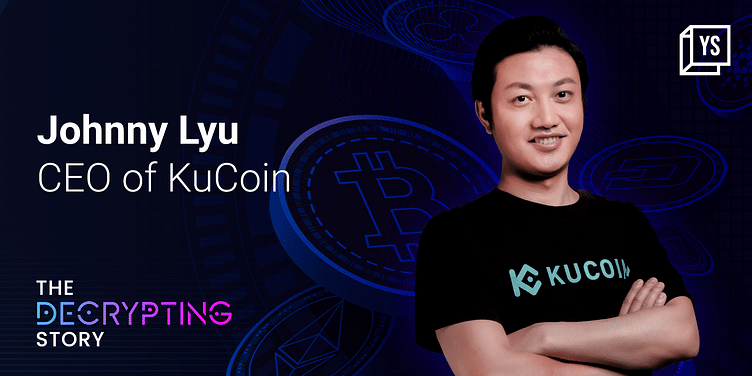 Johnny Lyu, CEO, KuCoin, talks to The Decrypting Story on strategies that fit emerging markets, initiatives to support Indian crypto users, and the future of crypto.

Crypto exchange ﻿KuCoin﻿’s recent report titled ‘Into the cryptoverse India’ reveals that its users are from Southeast Asian countries, particularly from India. Over 5.6 million new users are from the country.

In a conversation with The Decrypting Story, Johnny Lyu, CEO of KuCoin, talks about the Southeast Asian market and KuCoin’s strategies for emerging economies, including India.

According to Johnny, Southeast Asia has “an attractive Web3 talent pool and is one of the fastest-growing markets in the blockchain space." “These markets are utilising technology to create tools and businesses that address complex issues,” he says.

Besides Southeast Asia, KuCoin has also seen an influx in its user base from Latin America, Africa, Middle East, and Europe. “Africa has seen good adoption in terms of crypto,” says KuCoin’s CEO.

Johnny believes that understanding the needs of different regions, their financial infrastructure, cultural differences, and trading preferences is critical for the firm. Hence, it is adopting strategies to focus on these areas.

“Trading communities are more active in emerging markets than in developed markets, and cryptocurrencies are widely used in these developing economies. Projects in emerging markets would fare better when they are targeted at local traders,” says Johnny.

The exchange intends to provide infrastructure tools to help users in these markets. It currently offers a trading bot that allows users to set certain conditions in which the bot will execute trade.

“Our KuCoin trading bot is free-to-use software that traders can use to automate their crypto trading. We have examples of several users having earned a stable source of passive income in these countries by using the KuCoin trading bot at absolutely no cost,” says Johnny.

According to him, glocal strategy will be one of the company’s focus areas. “Hiring local employees to serve local customers could help accelerate this strategy,” he says.

In addition to its glocal strategy, the firm is also invested in education of users. To help drive safe crypto trading practices, KuCoin has launched a #ThinkBeforeYouInvest campaign. “That is aimed at sharing some basic level information for our users to gain more understanding of investor protection related queries,” says Johnny.

KuCoin’s CEO views India as one of the key markets and says that a sizeable portion of its users are Indians. Hence, the exchange is extending support to Indian startups.

Earlier this year, KuCoin launched a $50-million support plan to aid the development of the Indian blockchain industry.

“We have built local communities across India, hired locals, and we are actively collaborating with regional crypto firms like Bitbns, on various projects. India clearly has a huge potential to lead the cryptocurrency and blockchain industries as a market that is rapidly expanding.”

To strengthen the Indian Web3 ecosystem, the firm intends to finance initiatives such as incubation, hackathons, and consultation.

On the future potential of the Indian market, Johnny says, “The rise of venture capital investments and distributed ledger technology will be the key market growth drivers. Therefore, for continued growth, exchanges and crypto lenders should focus on user satisfaction, as the adoption of cryptocurrencies depends on the core principles of transparency and accountability.”

Johnny observes a trend that is unique to India. He points out that on-chain crypto activity is higher in India and crypto popularity has been rising in the country. “The shift in outlook among users towards investing in crypto can be seen.”

KuCoin is currently ranked fifth on CoinMarketCap’s ranking of crypto exchanges, trailing behind ﻿Binance﻿, ﻿Coinbase﻿, ﻿FTX﻿, and ﻿Kraken﻿. The Singapore-based crypto exchange reached 10 million users in December. It records a daily transaction volume of over $3 billion, according to data by CoinGecko, a cryptocurrency data aggregator.

Although Coinbase, FTX, and Binnace are frequently in the news, Johnny does not see them as competition because the exchange, he says, is concentrating on its user base rather on other exchanges.

“We have our differentiation and specific user groups. As one of the most emerging and developing industries, the crypto market is very diverse and extensive. Although there will inevitably be some competitiveness between each other, I think the most important thing is that each of us contribute to this growing industry through our own efforts and provide value to customers with the belief of accelerating the development of crypto, building consensus, and ultimately pushing crypto investments from geeks to the masses,” he says.

Johnny admits that creating a secure trading exchange has its set of challenges and the only way to overcome them is to work harder.

“We are working towards building an equal and safe trading market in the challenging geopolitical atmosphere of today, paying little attention to where we stand in ratings and listings. We now have to work even harder. Our crypto experts are putting together a flexible strategy that takes into account the present situation (the current bear market) and will enable us to move forward and maintain our reputation as a people’s exchange, in light of the fact that the operational environment and related regulations are changing every day,” he says.