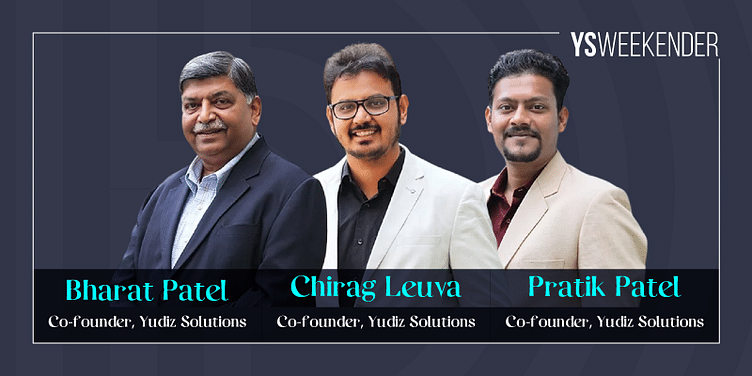 11Wickets, a fantasy sports app developed by Ahmedabad-based Yudiz Solutions, is a fast-growing fantasy gaming website. The app’s innovative features have attracted a large user base.

In a land where cricket is akin to religion, the ability to pick one’s own team of cricketing giants makes one feel god-like. This is, however, only possible through fantasy cricket apps. Aware that digital gamification was the next big thing in the sports arena, the team behind Ahmedabad-based ﻿Yudiz Solutions﻿ developed 11Wickets in 2013, which has since earned the title of being India’s fastest growing fantasy sports website.

Co-Founded by Chirag Leuva, Pratik Patel, and Bharat Patel, who are also its CEOs, and with Suraj Chokhani helming operations as the Director, 11Wickets is a fantasy cricket and football gaming app, where one can create their own teams by selecting players from line-ups provided, as they would in a real match. A suitable captain and vice-captain also must be picked for the final fantasy sporting team.

“Indians are completely fanatic about cricket. Cricket is in their soul. It’s not only a game, but an emotion. The 2019 estimation of the fantasy game users in India showed a projection of around $5 billion,” the co-founders explain their reason for venturing into this field.

Yudiz Solutions is the product of the dream of two college friends, Chirag and Pratik, who both pursued a master’s in computer applications at Nirma University, Ahmedabad. Their dream was to build a successful IT company.

They began in 2011 by offering services for website development and mobile application development. Realising the immense potential of the gaming industry and the growth it offers, they joined hands with Bharat, an engineer, and Suraj, who had a background in commerce, before diversifying into game development in 2013.

“At Yudiz Solutions, we pride ourselves on being a comprehensive digital solutions partner. We offer services across the board related to web, mobile, game, and blockchain solutions for your business,” Bharat says.

“Right from ideation to execution, we deliver a competitive edge in the form of robust, fore-sighted, and qualitative solutions,” Pratik adds.

Their hard work paid off when their company was crowned the best mobile app development company in Gujarat in 2015 by GESIA. Through what they refer to as an ‘agile, collaborative approach’, their team provides tailored domain-specific IT solutions to address and resolve varying digital business issues.

Cricket is a game of strategy that requires players to plan their every move. This, coupled with the glory that follows every famous cricketer, has ensured the popularity of fantasy cricket in India. The easy format of the game has universal appeal and cricket lovers enjoy using their knowledge and insights to win unlimited rewards by playing it on a daily basis.

Users of the app can browse through past player performances, coin toss results, the level of players’ physical fitness, their weaknesses, and inabilities before designing their exclusive team. Hence, putting together a winning team requires sound logic and extensive research.

The fantasy cricket league game runs simultaneously with the live game, and players amass points on the basis of runs scored and wickets taken by their chosen team members. This means serious consequences for a dud member in the chosen team of 11 players – a loss of points and eventually money!

Ultimately, no matter which team wins the live match, points depend on the individual live performances of selected players. Hence, the higher the performers score in the live matches, the better one’s chances of winning unlimited cash prizes.

“One of the key features of 11Wickets that separates us from our competitors is the fact that our users can create a team of 12 players in every cricket match. Hence, if any of the playing 11 is not part of a real-time match, the 12th man will automatically replace that player,” Chirag says.

The team at Yudiz Solutions ascribes the success of 11Wickets to its gamification. This aspect holds continued user engagement and appeals to people of all ages and categories. However, it is important to note that fantasy gaming works best when live sports are in session. The pandemic negatively affected their user base and numbers, but these picked up again when IPL and other cricketing events started.

Recently, 11Wickets introduced a feature through which commissions are provided for creating private leagues. This is most beneficial to league creators allowing them to take advantage of their large networks and earn more money.

The app can be downloaded from their website www.11wickets.com and is available for use on both Android and Apple devices. Users are encouraged to add money into their application wallets, which can be used for the purpose of building teams.

It has been an interesting growth story for the team. Without access to much capital, and finding it hard to convince investors, Yudiz Solutions was launched with a sum of Rs 1 lakh. Since then, they have moved from being a handful of people working round the clock on different digital projects, to a team of over 350 members.

“We take pride in the people who work at Yudiz Solutions. We believe in providing a holistic approach for the team so that they can refresh their energies and reinvigorate their creativity from time to time. At present we have 350+ Yudizians working in our company,” Chirag shares.

The success of 11Wickets has prompted the team to begin work on their next offering. They are currently working on launching their own Non-Fungible Token (NFT) Whitelabel marketplace, which potential clients can use to monetise NFTs.

For this purpose, they are looking to expand their team by onboarding over 200 new members.

The co-founders end by highlighting that their “willingness to deliver the best to clients has led us to adopt the most popular cloud computing system called Amazon Web Services (AWS). This will help us cater to a larger group of people in the market. And, as far as 11Wickets is concerned, we are planning to add new games into it to cater to a variety of sporting interests”.

Find the right balance: Here’s why a good dinner is important for health and wellbeing

Do's and don'ts while consuming superfoods