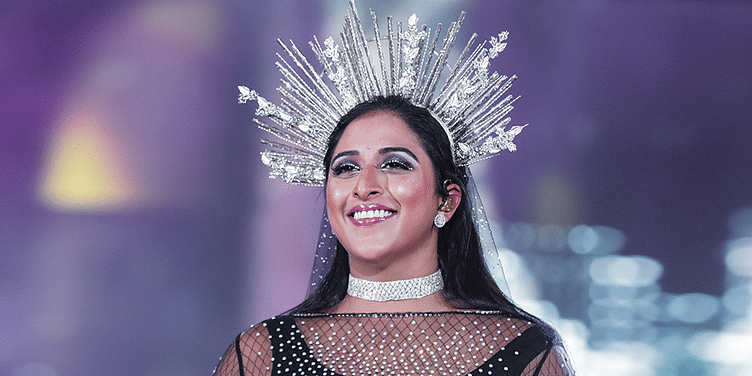 Songwriter and singer Svetha Rao, also known as Raja Kumari, released her highly acclaimed collaboration with rapper Divine for "City Slums" which garnered over 15 million views some years ago and she has had many projects since. She speaks to YS Weekender about her journey in the hip-hop arena

Her success story reads like a fairytale. And why not? After all, she chose to christen herself ‘Raja Kumari’ or princess when she was 14! Of Indian origin, and raised in a strict Indian cultural family in California, Svetha was a classical dance child prodigy by the time she was seven.

Svetha, also known as Raja Kumari, is well known as an Indian-origin, American songwriter, rapper and recording artist. She has worked with A.R. Rahman, Anirudh Ravi Chandan, Dr. Zeus and has collaborated with Kailash Kher for Zee 5’s “Lockdown”. She has also worked alongside Shahrukh Khan in Zero and Salman Khan in Race 3, apart from doing a cameo in Zoya Akhtar’s Gully Boy.

Recently, Raja Kumari became a judge on India’s first reality show for rappers titled MTV Hustle, alongside Raftaar and Nucleya. From classical Indian dance, to songwriting, and hip-hopping her way back to India, Raja Kumari has done it all.

Trying to stitch the two parts of her life together into a single tapestry, she tries to explain her transformation.

“I was trained in Indian classical dance and when I started to make hip-hop music, I knew I needed an alter ego. I think I was most inspired by Beyoncé and her alter ego Sasha Fierce. I thought I needed to make a character that was stronger than I am right now and greater than I currently am -- one that has all my best attributes -- and that's how I created the character when I was 14 years old! I think my entire career I’ve been trying to embody that kind of powerful woman and I believe I might be coming pretty close now.”

RK was five when she began learning classical Indian dance including Kuchipudi, Bharatnatyam, and Odissi, spending seven hours a day practising with a dance guru who lived with her family for 10 years! By the time she was seven, she made her debut in front of an audience that included Indian music legend Ravi Shankar, who declared her a child prodigy.

When she was 10, she embarked on 15-city solo showcase in USA and India. “We are from Hyderabad but my mother was born in Bengaluru and my grandmother used to live here –-- so we have roots in Bengaluru as well,” she says.

RK listened to nothing but classical Indian music until she was nine, she says, but then her older brother gave her a copy of The Score by Fugees, and her love for hip-hop was born. At 14, she recorded her first song professionally, started a hip-hop duo with a friend, and adopted her stage moniker. Bobby Friction first played her music live on UK radio when she was 17.

Hip-hop for RK became a mode of self-expression, as an Indian-American who didn’t see too many people like herself around her.

“Hip-hop is a way of life, it's a culture. And I think that in America, hip-hop has always been the voice of the marginalised and those who don't have representation. And that's the spirit of it. I think growing up in America as an Indian person that didn't see anyone like herself and there wasn't enough representation, I think that it spoke to me and it helped me express myself,” she says of what made her turn to hip-hop.

“I didn't necessarily know I was going to make it a career; I just knew it was my passion and I knew it made me happy and I couldn't replace the feeling that I felt when I was performing. So, I just went towards that with all my integrity and intensity and somehow, I have arrived here and I am so happy to be living my best life,” she says.

Between her growing up years and now, her musical influences have been very different, she admits. “I used to listen to pop music, classical music, Hindi music. But my current favourite music is a mixture of all kinds of genres, really depending on my mood. I mean if it is raining outside, then I listen to Mohammad Rafi; if I’m at the gym I may be listening to Meek Mill….it really just depends on my mood.”

Meeting East and the West

Earlier this year RK released her second EP – Bloodline -- a set which included the singles "Shook" and “Karma” co-written by Sean Garrett (who has written and produced with the likes of Beyoncé, Drake, Usher and Nicki Minaj).

Her ethnicity, she admits, has its advantages and disadvantages in the world of music; but it’s surely very much here, she reiterates.

“I can't tone down my Indian-ness; it is what it is. It runs through my blood -- that's why I named my project Bloodline -- you know, it's about the things that you can't change -- the way that you are, who you are, and where you come from. It's been both an advantage and disadvantage -- an advantage in a way that it sets me aside from everyone else and it shows that I have something that I believe in. It's been a disadvantage in some ways because people try to pigeonhole me and try to say I am only one thing. But I think my music speaks for itself and I think that it's transcending stereotypes and limitations placed on me by both the East and the West.”

RK has earlier co-written 4X Platinum record “Centuries” with Justin Tranter for Fall Out Boy, which earned her a 2015 BMI Pop Award and made it to the US Top 10 Billboard Charts. Thereafter, she co-wrote records for Fifth Harmony, Twin Shadow, Knife Party, Kalin and Miles, Dirty South, Lindsey Stirling, Ghost Town, Gwen Stefani (co-wrote six tracks on Stefani’s most recent album, “This is what the truth feels like”) as well as for the critically acclaimed series “Empire”.

Moving to India for its rising hip hop scene

She recently moved to Mumbai -- a move, which she says, was prompted by the rise of hip-hop culture in India. “I just was so inspired after doing one performance in India and seeing that there was so much of potential for me to really experiment as an artist. There was a lot of demand for my music and that meant that I would have a chance to perform. So, I moved to Mumbai to better myself as an artist and I believe that is what happened for me in this country,” she says.

After signing a deal with Sony India, she released her highly acclaimed collaboration with DIVINE for "City Slums" in 2017 which garnered over 15 million views. Since moving to India, she has worked with A.R. Rahman, Anirudh Ravi Chandan, Dr. Zeus and has collaborated with Kailash Kher for Zee 5’s “Lockdown”. In 2018 she worked alongside Shahrukh Khan for “Husna Parcham” in Zero and Salman Khan for "Allah Duhai" in Race 3 apart from doing a cameo in Zoya Akhtar’s Gully Boy in 2019.

She worked on rap vocals for the song ‘Jugni’ for the Mani Ratnam film “Kaatru Veliyidai”. RK says A.R. Rahman was one of the biggest influences in her life.

“I think I only listened to his music while growing up. There was Carnatic classical that I danced to, and then there was A. R. Rahman till I was 10 or 11 years old. Then I started listening to English music so I like to call him my musical father because I think he laid the foundation for me to understand music. And the experience working with him is like a dream. Every time I get to be a part of a creation with him, I am really excited about it because he always makes something very fun...”

In her earlier years, to further develop her writing skills, RK spent a considerable amount of time in studio sessions and attended songwriting camps in Denmark, Finland, Sweden, France and Jamaica, Bali as well as the BMI Songwriters Retreat in Aspen and soaked up everything she could about writing and vocal production.

Hip-hop is not a male game

The Indian hip-hop scene is growing at a rapid pace, believes RK.

“I am thankful to be a part of the curators of the culture and helping to set the mood. I would like to let other women know that hip-hop is not a male game only and that there’s room for us at the table. Now I have been meeting more female Emcees, especially since I started MTV Hustle and I can see there is a change coming and I think we are going to see more women speaking for themselves.”