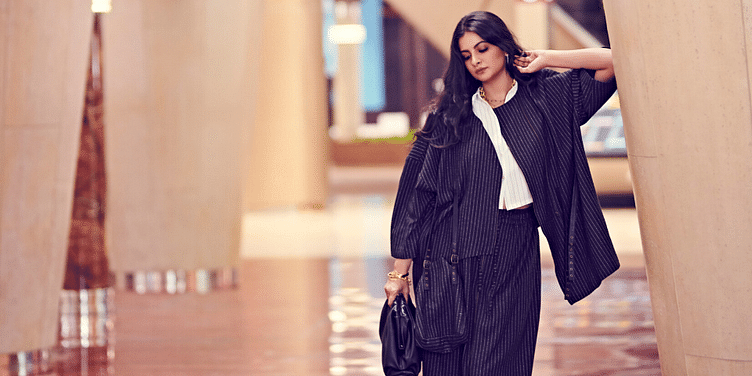 Rhea Kapoor, sister of actress Sonam Kapoor Ahuja is the founder of Rheson, a high-street fashion label. In an exclusive interview, she reveals how she forayed into Bollywood, gave acting a miss, and built her very own business instead.

At 32, Rhea Kapoor is one of Bollywood’s best-known fashion mavericks, a successful film producer, and a young entrepreneur, with the recent launch of her Rheson fashion label with sister Sonam K Ahuja.

That her entrepreneurial endeavour is a sum collective of her personality, is hardly a surprise. Her latest collaboration with fashion designer Masaba Gupta, is a proof of her incredible talent. Called ‘The Chronicles of Femininity’, her new collection of clothes is versatile, feminine, and yet strong, celebrating modern women and womanhood in all its glory.

“We have been thinking about it for a while and creating clothes for ourselves that are not trend driven but clothes that accentuate our curves and our changing minds. This translated into creating this collection that is strong, playful yet direct,” Rhea tells YS Weekender in an exclusive interview.

As it turns out, the collaboration happened – wait for it – over a drink.

“Over the past few years, we naturally had been collaborating for Sonam, so we decided to do this together. The experience was amazing. I am glad that the collection has been well received and is doing very well,” she quips.

Fashion as a tool for communication

For Rhea, fashion is something ingrained in her psyche. Her sartorial taste, in fact, made a splash in the tabloids when she first dressed and styled Sonam for the red carpet.

From conquering Cannes to ruling the roost closer to home, the sisters have since then changed the way people perceive fashion, and more importantly, they have elevated the style quotient of the fashionistas.

Fashion, as Rhea says, is a tool to tell people who you are, what your mood is and what you represent and what you want to communicate to the room. “It is a really powerful thing because you literally wear it on your body,” she adds.

It is because of this vision that Rhea has managed to carve a place for herself in an industry that is already overcrowded. Instead of fading into the crowd, the stylist has been shattering the glass ceiling with her style statements, limited collections, and her many fashion collaborations. Her collaboration with Masaba is just one part of this journey.

Rhea's high-street fashion line Rheson is currently available online on Shoppers Stop and Amazon.in. The brand – a portmanteau of Rhea and Sonam’s first names – is not only her first but it also marks her entrepreneurial debut, a success that she modestly attributes to her partnerships with her sister.

“If it was not for Sonam, I won’t have these opportunities, so obviously my first collaboration was with her. I love being an entrepreneur, I love doing new things and I love challenging myself. It keeps me going,” she says.

In the recent past, the stylist-turned-entrepreneur has also collaborated with Phoenix Marketcity in Mumbai for a Christmas shopping fiesta video.

“The year end is a time for festivities, get-togethers and parties, and so it is a great time to shop too. And this mall, [Phoenix Marketcity] houses over 600 brands under one roof and is a leading destination for shopping, dining and entertainment. We wanted to show how much fun this could be,” she tells us.

"For this collaboration I visited a number of shops like Sephora, Calvin Klein and Diesel which was fun. The mall also had beautiful installations up for Christmas, which added to the festive ambience and made it an Instagram heaven." she adds.

“With fashion, what goes around comes around,” she says heaping praises on businesses and startups that encourage a sustainable lifestyle. “Platforms like Stage 3 that motivate people, to rent their ensembles and return them are commendable.”

Strong, sexy, easy, and comfortable. In Rhea’s own words, these are the words that define her personal style statement.

“I am definitely much more androgynous in the way I like to dress. I like men’s wear a lot and wear a lot of men’s clothes. I mix them with a lot of attire that is feminine and sexy and that’s how I am different from Sonam,” she tells us, sharing that her actor sister is more into prints, skirts, and feminine dresses.

A rather unorthodox taste, some would say. But it is this streak of unconventionality that has dominated her foray into various domains, right from fashion to showbiz. In 2010, Rhea made her Bollywood debut as producer of the movie, Aisha, a romantic comedy based on Jane Austen’s novel Emma.

“Production happened to me because we got Aisha’s script one day and we decided to take it up. I was supposed to work under my father and then he got the movie, 24, and I ended up taking up the project all by myself at the age of 21,” she recalls. “I realised that if I worked hard and was good at it, my work would be rewarding. Therefore, I decided to take it up and have never regretted it since. I believe that it is my calling.”

The decision was right on track, as Rhea followed it up with two more successful hits – 2014’s Khoobsurat and 2018’s Veere Di Wedding, a star-studded women-led drama, celebrating female friendship in urban India. A bold choice indeed, as the film stirred up quite a storm on social media. The filmmaker believes there is an urgent need for such strong storylines.

“Of course, there is place for women-led films, stories because we are 60 percent of the population and we are dying for something that we can relate to, something we can celebrate and characters we can cry or laugh with,” she says.

Say no to ‘boring’ and ‘predictable’

Whether it is with her choices in fashion or films, Rhea Kapoor has favoured the untold and unconventional over the usual. It is because, she says, telling stories that have been told before or doing things that have been done before is boring and predictable and who wants to be boring?

Having said that, Rhea adds that her mantra of a successful business is to be pleasant and enjoyable to work around. "I was determined to create an atmosphere where people respect you, but not fear you," she shares.

Rhea’s foray into entrepreneurship might be just around three years old, but the way she fields questions about her business and Bollywood speaks volumes about her strengths as the ‘Boss-Lady’ and her candour and calm mind are her greatest strengths.

Without revealing too much, she hints that her plate is full at the moment, with two movies, a show, and some “exciting projects” in the pipeline. It’s tempting to wonder at the marvels of this hustle-bustle, but Rhea is quick to say that there’s a flip side to all this.

“These are fields that everyone wants to be in because they look glamorous and fun,” she says. Her advice to her fans and followers is “If you want to be an actor or a stylist or a producer, don’t be in it for the end result. Be in it for the process!”

Meet the entrepreneur who manages big talent like Arijit Singh, Vishal Bharadwaj, Kapil Sharma and others