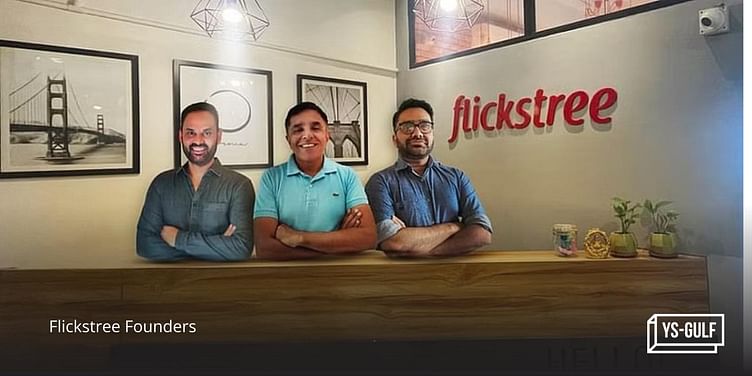 Flickstree’s platform uses AI voiceover and AI script to auto-generate branded video content. These videos are distributed through its own apps and websites such as PlusYou Club and a network of more than 150 publisher partners.

When Saurabh Singh, Rahul Jain, and Nagendra Sandra started ﻿Flickstree﻿ in 2016, they focussed on ensuring that the end consumer could discover content online.

“But with time, we realised just discovery isn’t going to help. There has to be consumption play. The transaction has to be in the same place,” says Saurabh in a conversation with YourStory Gulf Edition.

However, as the team was working on third-party discovery and consumption, they found monetisation to be challenging, as it was purely based on ad discovery. “For two to three years, we focussed on content-based ad monetisation model but during the pandemic worked on the tech and growth of the platform,” says Saurabh.

The platform uses AI voiceover and AI script to auto-generate branded video content. These videos are distributed through its own apps and websites such as PlusYou Club and a network of more than 150 publisher partners. Flickstree currently has an active client base in India, the Middle East, South-East Asia, the UK, Australia, and the USA.

The team today works with 171 brands. The platform adds close to 1,000 odd video pieces every month with transactions worth Rs 50 crore.

Powered by its success in India, the company is closely looking at the Middle East market for its next phase of growth. The startup has also raised $5 million in Pre-Series B funding round led by Venture Catalysts, earlier in October.

"Content-driven ecommerce is the fastest growing segment of online sales across Asia," said William Bao Bean, Managing Director Orbit Startups and General Partner SOSV. "Flickstree is the leader in India and now positioned to expand across the region helping brands to leverage video to drive sales."

The platform already has a strong base in the Middle East and is looking to set up a video commerce base in the region.

Saurabh says while the team started the Middle East operations earlier this year, the team has worked with clients in the region for a long time. India accounts for 30% of the company’s revenue, the rest 70% is from the US, UK, and Middle East.

He explains the team had realised the content consumption in these markets is high and different. Of these, Saurabh explains the Middle East also was an instant success.

“The market is open to experiments, and loves to consume content. And content consumption around shopping is high in the region. Also it is a premium market. UAE especially is significantly premium,” says Saurabh.

Flickstree works in a plug-and-play model and its team specialises in the fields of branding, sales and distribution, digital marketing, machine learning, and artificial intelligence technology.

The company says it caters to over 200 brands worldwide, driving transactions of over $50 million annually, and boasts an active user base of 25 million on its platform.

“Consumers love watching video content before making transactions. That’s why content-led commerce is the future of ecommerce. Flickstree’s AI creates great content that consumers love to watch and transact, making this a cutting-edge platform to partner with, for all ecommerce brands worldwide,” says Saurabh.

The founders say the company focusses on reaching the consumers where they are—such as via pre-embedded apps on smartphones—instead of waiting for users to discover the content.

This has made the content-to-click ratio for Flickstree to be at 4.5%. He adds the Middle East is a good market for Indian entrepreneurs, as there are limited barriers and the region has a stronger diaspora with a multicultural audience.

“What helped in our growth was understanding what we don't want to focus on. We realised there was a need to focus on content-driven transactions. If you remove the consumption aspects you are out of the time spent, minutes race, engagement of the video. For us the focus is on after watching a video how many people clicked on the buy button, transactions, and repeat consumers” explains Saurabh.

The company now plans for global expansion, along with strengthening its product and technology.