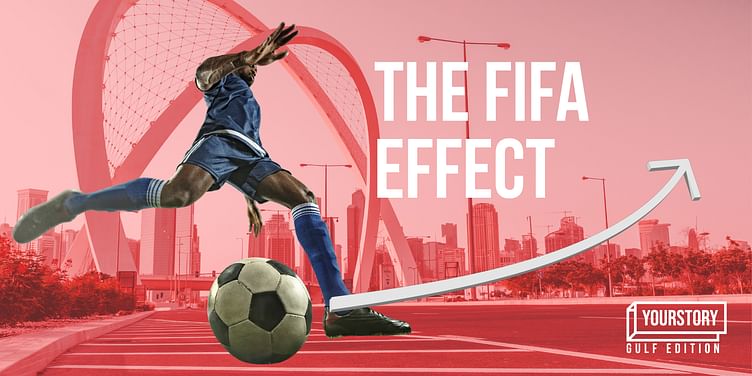 The 2022 FIFA World Cup is here—hosted for the first time by a Middle Eastern country. The sporting spectacle, which is attracting hordes of football fans from across the world, is expected to contribute over $20 billion to Qatar’s economy.

The much-awaited World Cup is finally here. And the winter World Cup hasn’t deterred fans across the world from flocking to the Middle Eastern region to witness what is, by far, the most expensive World Cup ever.

The country is estimated to have spent a staggering $220 billion since 2010. This is 15 times of what Russia spent for the 2018 event. Not just that, the state has spent over $300 billion to upgrade the infrastructure. This includes the Doha Metro, several 1000 kilometres of roads and highways, a new airport, a new city, and a new port. Not to mention gas and oil facilities.

According to several reports, financial analysts estimate Qatar’s GDP to rise by 4.1% by the end of this year thanks to the World Cup. And between 2022 and 2030, the GDP of the region will be at an average of 3.2%. Reports point out that the 2022 FIFA World Cup will contribute over $20 billion to Qatar’s economy.

All this also means an increasing amount of money being spent. According to a press report by the news agency Zawya, the football fans of the region will be spending more on socialising and venturing out, compared to the previous World Cup.

According to the data released in a new survey, reported by Zawya, more than half of respondents—54%—in Qatar, 45% in Saudi Arabia, and 42% in the UAE will spend more than what they did during the previous World Cup tournaments.

Further, the World Cup is expected to witness a surge in the amount of food ordered. The levels of ordering will be 80% normal at peak times on match days, compared to normal days, said the report.

Bull run for a while

According to an Al Jazeera report, in the first 10 months of the year, the country has already seen foreign inflows of $4 billion. The Qatar Stock Market (QSE) has, in fact, outperformed peers in the run-up to the mega sporting event. And this is expected to continue even a year after the tournament.

Reports say that the QSE Index, which measures the 20 most liquid and largest stocks on the exchange, grew as much as 24.7% in the beginning of the year until April 2022. However, while it declined and flatlined for a while, it was up by 12.1%.

Apart from the economic impact and the growth of larger companies, the MSME sector in the region will also see significant growth. The sector has, in fact, been one of the largest economic drivers in Qatar for the last 10 years.

During a panel discussion at GWC Forum 2022 in Doha in November, Syed Maad, Chief Business Development Officer,  Qatar, stated that sector will see major growth in the coming years. He also said that, in the last four years, there has been a growth in terms of the contribution of the region’s MSMEs to the economy of Qatar.

The startups of the region are also showing significant interest in the World Cup.  Doha-based tech startup Arvex is offering 360-degree VR tours of the Khalifa International Stadium at Doha.

In a bid to bring in the highest forms of technology to the World Cup, the region has pumped in funding into sKora—a Qatari technology startup. The artificial intelligence (AI) used by the sKora platform will help identify talent and prepare athletes on the basis of valuable insights. sKora’s systems will take stock of unique traits, skills, and performance by the athletes to generate AI-backed data and insights, which in turn will map out the right career path for them.

For Qatar, the World Cup is a way to showcase and nurture more industries in the region and move beyond its dependency on oil and gas. Working with startups like Arvex is encouraging more local businesses and entrepreneurs.

The Qatar’s Supreme Committee for Delivery and Legacy, Challenge22, had offered mentorship, cash, and training for startups and ideas that had the potential to aid its preparations for the World Cup.

A physics tutor from Virginia Commonwealth University, Qatar, was given a grant for research on a polystyrene composite for insulation materials to be used in the World Cup. An all-women group of Saudi engineers, who used waste from date palm to make seats in the stadium, were given grants.

Now, with the World Cup, Qatari talent and entrepreneurship zeal is being strongly fostered. It will be interesting to see how things pan out after the big event.